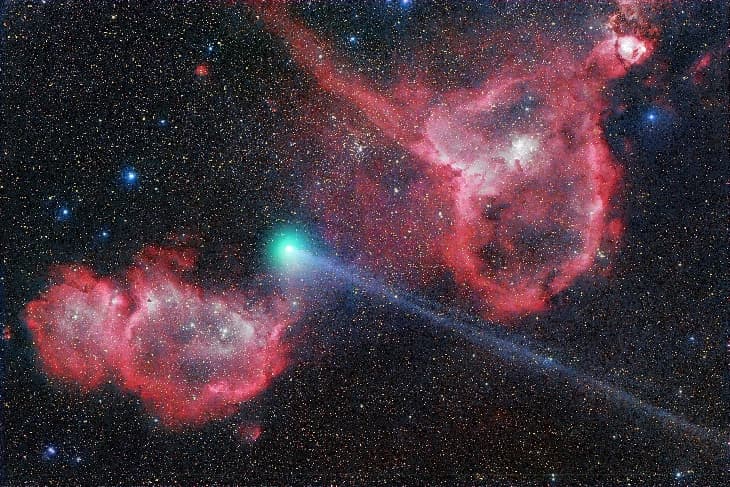 In this mesmerizing image, Comet Jacques is seen soaring across the skyin the constellation of Cassiopeia  on August 19th. The comet itself makes for a beautiful sight, but instead of being a solitary streak 0f brightness against millions of faint and tiny pinpoints of light, this image shows Comet Jacques against a nebular background.

The nebulae in question, the Heart nebula (also known as  IC 1805, pictured to the right) and the Soul Nebula (formally designated IC 1848, seen on the left). Both also lie within the Cassiopeia constellation about 7,500 light-years from Earth. They, by nature, are emission nebulae, which means that these regions are shaped by the energized radiation streaming from a plethora of stars (in this case, there are multiple clusters hurrying the process along).

As the radiation meets large concentrations of interstellar gas, it excites the atoms comprising the gas, subsequently stripping hydrogen atoms of  their electrons. When they inevitably rejoin, the hydrogen clouds glow in a brilliant shade of red. Many times, these nebulae are accompanied by dense collections of interstellar dust, called dark nebulae, that make it impossible to see the star formation activity taking place within (at least at optical wavelengths). However, they do add an extra layer of pizzazz to an already-impressive view.

The spacetime the Heart and Soul nebulae inhabit has a nice mix of black and red, extending some 300 light-years across in totality. From our vantage point, with Jacques in our field of view, the region is still incredibly prominent at 7,500 light-years out, which is a testament to just how large it is.