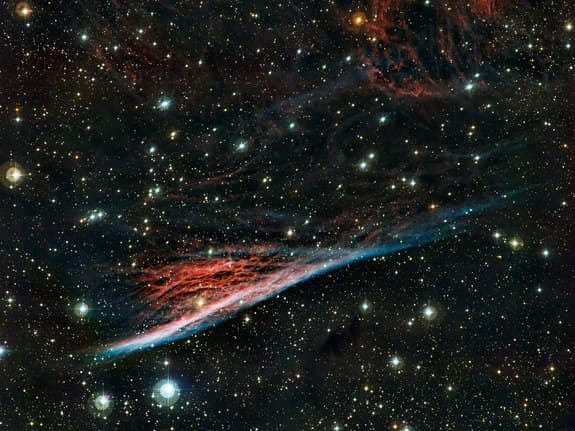 Located about 815 light-years from Earth in the constellation of Vela, this unique little nebula is commonly known as the Pencil Nebula. NGC 2736, as it is formally named, is a part of the Vela Supernova Remnant, which is located by the Vela Pulsar -- a region that is a strong source of x-ray, radio wave and gamma-ray emissions. None of which can be discerned by the naked eye. One must use special filters to observe the distinct emissions from the nebula. The red portions can be attributed to cooler emissions from hydrogen, with the blue colors representative of very hot, ionized oxygen emissions.

The Vela supernova shockwave began traveling through interstellar space at speeds exceeding one million kilometers per hour -- an endeavor that began once the star responsible for its inception went supernova approximately 12,000 years ago. Since then, the weight of the gas has begun to substantially slow the shockwave down with time.. now causing it to travel at about 500,000 kilometers per hour.

Famously, John Herschel first discovered the nebula on March 1st of 1835 as he undertook four years of observations in South Africa. Upon its discovery, he described it as "an extraordinarily long, narrow ray of excessively feeble light."

One more interesting thing to note about NGC 2736 is that it's located almost exactly on the galactic equator, which is where astronomers would generally expect to find an outlying wisp of the Vela supernova remnant. That is, if one were to assume that the arc of the nebulosity is the north-west quadrant of a spherical shell, which outlines the outwards expansion of the gases expelled once the star went supernova long ago.