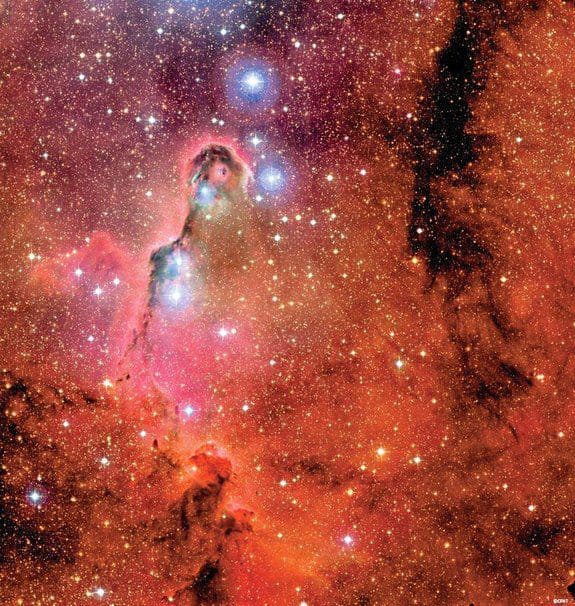 This beauty is IC 13961 (more commonly known as the Elephant's Trunk Nebula); a region that lies about 2,400 light-years from Earth in the quaint constellation of Cepheus. Also within the vicinity of IC 13961 is the larger emission nebula called IC 1396, where extremely hot, glowing clouds of gas and dust reside. These clouds are known to absorb the light emitted in optical wavelengths from the baby stars buried within the nebula. They would remain hidden from our sensitive telescopes without special filters that can detect light in infrared or ultraviolet, alluding to the presence of younger, still cool protostars that are just beginning to emerge from their stellar cocoons.

Most emission nebulae such as this one, are often found in regions of space where new stars are furiously being created from collapsing clouds of hydrogen gas. All emission nebulae are responsible for absorbing the optical light and energy from neighboring stars, until the clouds become ionized, causing them to brilliantly glow until they can be seen using special telescope tools. Astronomers subsequently use the information to put together nebulae as they are seen at multiple wavelengths on the electromagnetic spectrum.

One pair of young stars in the cluster, known as LkHa 349 and LkHa 349c (catchy, right?), can be seen both at optical and infrared wavelengths through a spherical opening near the elongated dark globule of the Elephant's 'trunk,' with one of the stars being much fainter optically than its partner. Interestingly, both of them look roughly the same magnitude when seen in infrared, which suggests that there's some sort of a circumstellar disk around LkHa 349c. It's quite likely that this circumstellar disk will eventually give birth to a planetary system in the next few millions of years, as the material collects and coalesces into planets and moons.

(P.S. This region is even more breathtaking in 3D. Check it out.)