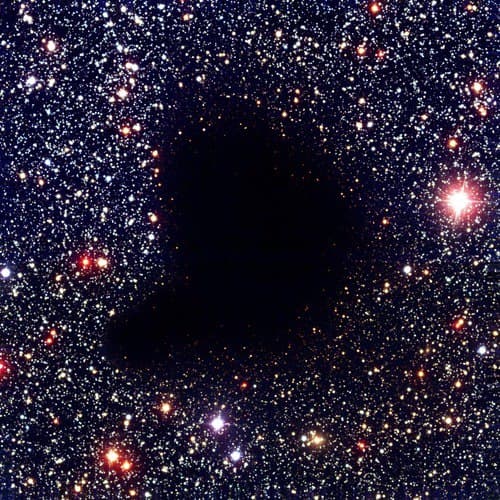 Contrary to what your first instinct might tell you upon viewing this image, this is not a black hole. Not in the conventional sense anyway. It isn't sucking in matter that comes too close to it. Instead, this is a dark absorption nebula that's located about 500 light-years away in the constellation Ophiuchus, known as Barnard 68 (the object itself is believed to be about half a light-year in length). Since all of the light from the background stars is being obstructed, astronomers can accurately determine that the cloud is close in distance (cosmically speaking, of course) to us.

In contrast to the surrounding stars of varying sizes and colors, the "black hole" is quite a sight indeed. These so-called "molecular clouds" are some of the coldest and most isolated places in the universe where all of the light being emitted from the stars inside of them is being blocked from view by high concentrations of fine dust and molecular gas. Said material absorbs most of (if not all) the light that can be seen at optical wavelengths.

As I mentioned previously, these things are both cold and dark. The temperature inside is a mere 10 kelvin above absolute zero (or about -440 degrees F/-263 C), which is around 40 degrees Fahrenheit colder than the dwarf-planet, Pluto. At these extreme temperatures, most of the carbon monoxide and nitrogen molecules have attached and frozen onto the tiny dust grains within the cloud, which are composed mainly of molecular hydrogen and atomic helium, with bits of heavier elements peppered throughout to contribute to the darkness. On that note, if you were able to shoot a trillion photons of yellow light through the center of the cloud, only one single photon would reach the other side!

Astronomers are less than certain about the cloud's birth and its ultimate fate, but it's quite likely that the cloud will eventually collapse sometime within the next 100,000 years, giving life to a new, sun-like star. If one wanted to take a peak through the cloud to see it on a different wavelength, this is how it looks in infrared. The stars appear red in color due to the fact that to be perceptible, we need to look at them at the longest possible wavelength, red (infrared).