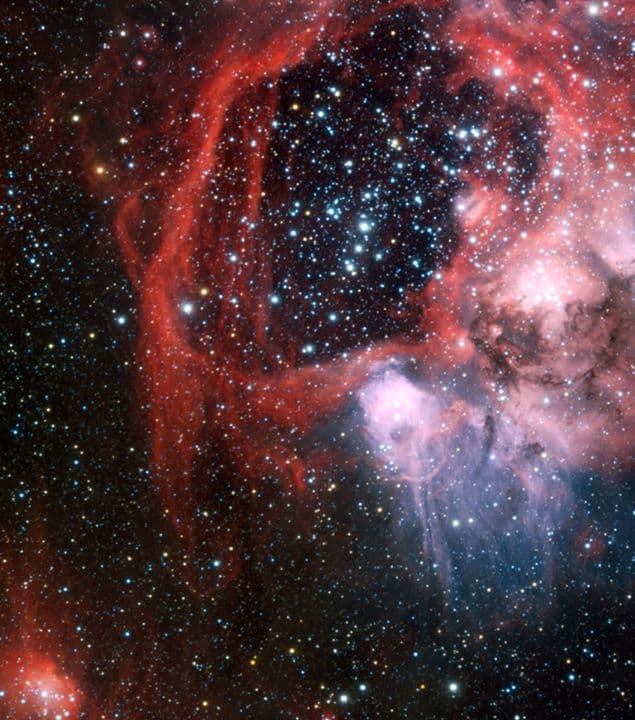 This striking 'cosmic superbubble' lies near the star cluster known as NGC 1929, which is located in the Large Magellanic Cloud -- one of the small satellite galaxies of the Milky Way.

Taken using the European Space Observatory's 'Very Large Telescope,' here, you can see the many regions in the nebula, officially known as LHA 120-N 44, that are actively producing new stars. Said young stars are beaming intense rays of ultraviolet radiation into the surrounding expanse of space, causing the gas present to glow this brilliant shade of red.

As I briefly mentioned earlier, this region of space is inhabited by a super-bubble. Cosmic phenomena that shape this kind of structure do not actually form conventional bubbles. Instead, they are vast shells of material (such as gas and dust) that are shaped by the destructive forces of the UV radiation emanating from the central stars.

N 44 (the bubble's formal classification) is actually very large. Its dimensions are estimated to be about 325 light-years by 250 LY. For instance, WASP-10b is a planetary system located about 300 light-years from Earth in the constellation of Pegasus. While our nearest galactic neighbors lie a little more than 4 light-years from Earth in the Alpha Centauri system. This bubble is so large, it could encase all three planetary systems!

You can find a high-res version of this image here.