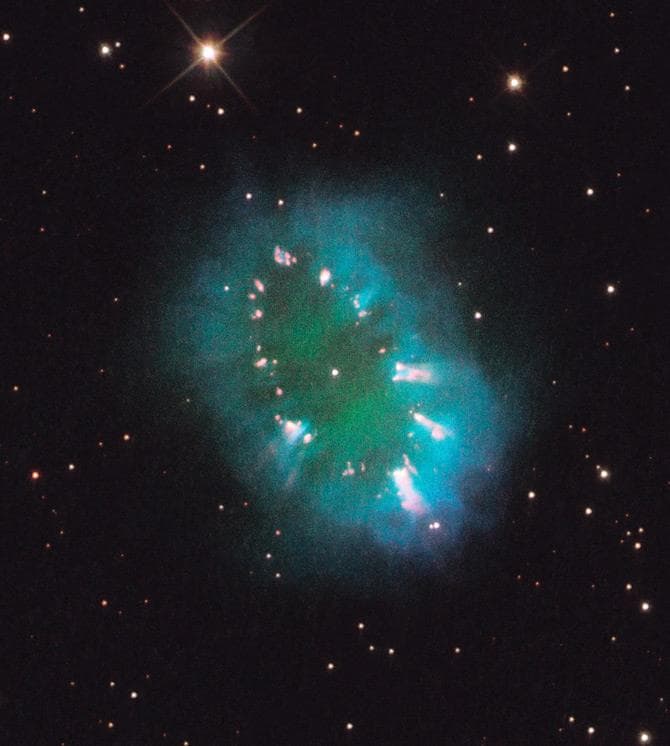 This interesting celestial feature is the Necklace nebula (formally known as PN G054.2-03.4), which lies about 15,000 light years from Earth toward the Sagitta (the Arrow) constellation. The colors in this image, which is in false-color and stitched together using several observations made by Hubble's Wide Field Camera 3, correspond to emissions of certain elements. In this case, the blue is representative of hydrogen, green corresponds to oxygen, while the small red portions are composed of nitrogen.

In the heart of this planetary nebula (not to be confused with an actual planet) lies a pair of sun-like stars orbiting each other at a close distance of just a few million miles. So close, in fact, that they complete a single orbit around one another in just one day. Over the course of the last 10,000 years, one of the two aging stars devoured its companion as it transitioned from a main-sequence star to a red-giant, a move our sun will experience here in about 4 billion years.

During this transition, the smaller of the two stars continued to orbit INSIDE its companion, which increased its rotation rate, causing it to expel a large portion of its outer envelope of gases into space -- forming a ring that extends about a half light-year across. Overall, the nebula spans approximately 9 light-years across, edge-to-edge, which is almost twice the distance between the sun and our nearest neighbors, the Alpha Centauri triple star system.

"Hubble Offers a Dazzling View of the 'Necklace' Nebula:"
http://hubblesite.org/newscenter/archive/releases/2011/24/image/b/

You can see a larger version of this image here, or some more images of the nebula here.