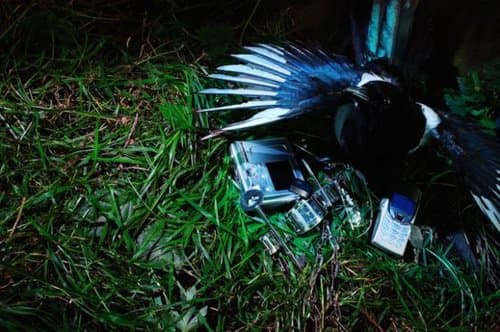 Humans, unfortunately, tend to like stereotypes. Perhaps we prefer a world that is neat and orderly--one that is easily identifiable. Or maybe we like to see meaning and significance where there is none. But regardless of the rational behind this phenomenon, our world is populated with stereotypes. We even have stereotype for animals. In fact, we have a lot of animal stereotypes. Let's that a brief look at the movies:

The list goes on and on (cats are sly, pigs are greedy, elephants never forget...). However, perhaps one of the most prominent stereotypes is that magpies (Pica pica) like shiny objects. Generally, individuals believe that the birds steal things that glitter or shine and bring them back to decorate their nests. However, Dr. Toni Shepherd, a psychologist from Exeter University's Centre for Research in Animal Behaviour (CRAB), recently completed research that indicates that this particular stereotype is entirely unfounded. In fact, as it turns out, magpies are actually afraid of shiny objects. In order to conduct their tests, the researchers used two piles of material that were placed equidistant from a a heap of food. They also used several different groupings of magpies (captive birds, wild birds that frequented the university campus, and a control group). In the first pile of material, the scientists placed a number of shiny objects (metal screws, aluminium foil, and so on). In the second group, the scientists used the same objects, but ensured that they were matte-painted so that they did not shine.

Perhaps most notably, the birds that were confronted with shiny objects generally exhibited "wary behaviour and feeding less in the presence of the items." Conversely, the control group (which was not confronted by the shiny material) displayed no such behavioral patterns. The captive birds entirely avoided both piles, and out of 64 instances where wild birds were confronted with the objects and the food, only 2 picked up an item (a silver ring), and each time the bird immediately dropped it. In their conclusion, the researchers state:

We did not find evidence of an unconditional attraction to shiny objects in magpies. Instead, all objects prompted responses indicating neophobia – fear of new things. We suggest that humans notice when magpies occasionally pick up shiny objects because they believe the birds find them attractive, while it goes unnoticed when magpies interact with less eye-catching items. It seems likely that the folklore surrounding them is a result of cultural generalisation and anecdotes rather than evidence.

Dr. Natalie Hempel de Ibarra, a co-author of the paper, asserts that this finding is this consistent with what we know about the intelligence of the birds:

Surprisingly little research has investigated the cognitive mechanisms of magpie behaviour. Similarly to other large-brained members of the crow family with complex social systems, magpies are capable of sophisticated mental feats, such as mirror self-recognition, retrieval of hidden objects and remembering where and when they have hoarded what food item. Here we demonstrate once more that they are smart – instead of being compulsively drawn towards shiny objects, magpies decide to keep a safe distance when these objects are novel and unexpected.

For more on the intelligence of these birds, see the video below.

“’The thieving magpie’? No evidence for attraction to shiny objects” is published today in the journal Animal Cognition. H/T io9