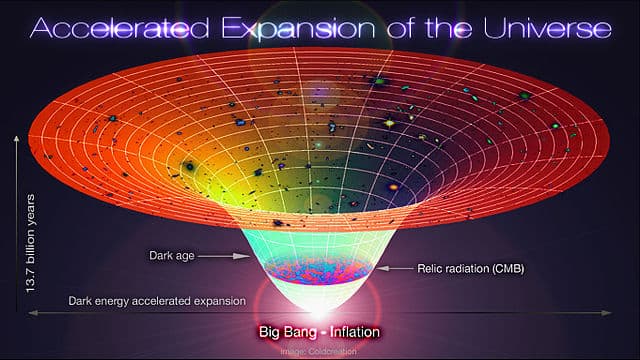 In August of 2013, physicists made a major breakthrough in our understanding of the early universe in an experiment that successfully reproduced a pattern resembling the cosmic microwave background radiation. This experiment was conducted at the University of Chicago with the aid of ultracold cesium atoms.

"This is the first time an experiment like this has simulated the evolution of structure in the early universe," according to physics professor Cheng Chin, one of the authors on this project. The goal of the experiment was to simulate the big bang using ultracold atoms in an effort to understand how the universe evolved at the earliest timescales. Tentatively, their experiment seems a tremendous success

The cosmic microwave background (CMB) is one of the only things we have left to analyze the early structure of the universe, and this CMB is a kind of window, allowing us to go back in time to that most volatile period in our universe's history. Ultimately, it allows us to pull a fingerprint of the universe when it was only 380,000 years old. This pervasive radiation has been mapped over the last few decades. The most recent and most detailed mapping of the CMB comes from the Planck Space Observatory and was completed earlier this year.

Chen-Lung Hung, the lead author on the project, described the methodology of the experiment as follows, "...under certain conditions, a cloud of atoms chilled to a billionth of a degree above absolute zero (-459.67 degrees Fahrenheit) in a vacuum chamber displays phenomena similar to those that unfolded following the Big Bang. At this ultracold temperature, atoms get excited collectively. They act as if they are sound waves in air." That sound wave action can be observed in the CMB.

The echoing and rippling of spacetime created in the big bang was exaggerated in the period of the universe's rapid inflation. These ripples reverberated back and forth and interacted with each other creating the foundation for the complicated patterns we see in the universe today. This phenomenon is known as "Sakharov acoustic oscillations" after the scientists who first described them.

The simulated universe comprised of a cloud of 10,000 cesium atoms, chilled to a billionth of a degree above absolute zero. This caused the atoms to form an exotic state of matter called two-dimensional atomic superfluid. This simulated universe measured about 70-microns in diameter, or about the size of a human hair. Even though the universe had a diameter of about 100,000 light-years when emitted the pattern we recognize today as the CMB, the much smaller simulated universe behaved in exactly the same fashion as a large universe would.