An Interesting Turn of Events For Proponents of MOND 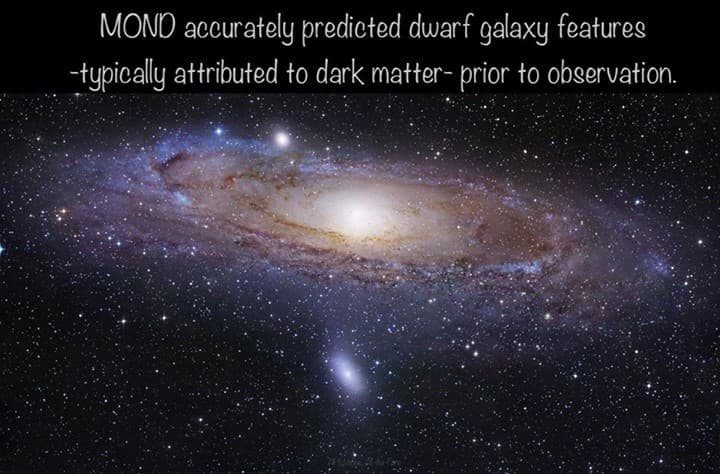 The "holy grail" of a scientific theory is one that can make accurate predictions of phenomena in advance. Recently, a group of researchers developing Modified Newtonian Dynamics (MOND), which is a modified law of gravity, successfully predicted the motions of 10 dwarf galaxies in orbit around the Andromeda galaxy in advance. This could be a huge leap forward for MOND.   What is MOND? MOND is an alternative to dark matter and attempts to explain the gravitational discrepancies seen in the motions of galaxies. In the early 20th century, astronomers discovered galaxies were moving in a way that didn't make sense with all of the observable matter. This lead to the shocking realization that either there is an invisible substance adding to the mass of the galaxy, or our current laws of gravity were incomplete. Dark matter appeals to the first solution and MOND appeals to the second. Thus far, dark matter has proven itself to be a more reliable theory, providing a little more accuracy when describing the motions of galaxies, but it has some deep seated problems. The winds might be changing, as MOND is developing further.

The 10 dwarf galaxies that were surveyed have some huge discrepancies from one another, so it's a fantastic place for MOND to prove its worth. Since the galaxies aren't alike, if MOND was able to predict their motions with accuracy, it would give credence to the hypothesis. Indeed, the hypothesis succeeded in it's predictions according to a paper published by Stacy McGaugh, who among other credentials, is one of the founders of MOND. The universe is currently thought to be composed of vast quantities of dark matter, about 26.8% in contrast to the 4.9% normal ‘visible’ matter in the visible universe. Even though dwarf galaxies are small, containing only a few thousand stars, when you're dealing with a 1:5 ratio of regular matter to dark matter, you infer the presence of a ton of dark matter. That is assuming gravity is conventional instead of being modified.   "Most scientists are more comfortable with the dark matter interpretation, but we need to understand why MOND succeeds with these predictions. We don't even know how to make this prediction with dark matter. At stake now is whether the universe is predominantly made of an invisible substance that persistently eludes detection in the laboratory, or whether we are obliged to modify one of our most fundamental theories, the law of gravity." McGaugh said in an interview about the findings.   According to the MOND hypothesis, the original Newtonian laws at low acceleration is significantly less that we currently believe. Once you start getting to higher accelerations, gravity returns to "normal" and the original Newtonian equations work just fine. Hypothetically, the modification of gravity at these small accelerations is sufficient to eliminate the need for dark matter altogether because it's able to account for the currently observed mass discrepancies.

According to the paper, this iteration of MOND was able to accurately describe little but measurable discrepancies seen in the gravitational fields of Andromeda's dwarf galaxies in spite of their distance to the large spiral galaxy. According to dark matter, no such distinction should be expected. In this case, dark matter is able to make an "after the fact" prediction (when you modify the dark matter values for the dwarfs, you are able to make accurate calculations) whereas the MOND hypothesis was able to make accurate predictions without "cheating." While talking about MOND's falsifiablity, McGaugh said, "The influence of the host galaxy may provide a test to distinguish between dark matter and MOND. Dark matter provides a cocoon for the dwarfs, protecting the stars from tidal influence by the host galaxy. With MOND, the influence of the host is more pronounced."   To date, McGaugh has been able to successfully predict the velocity dispersion of 17 dwarf galaxies, which is fantastic news for proponents of MOND. Dark matter still has a ton of observational evidence in its favor that MOND will have to contend with, but the fact that the hypothesis is making predictions unattainable by dark matter is a step in the right direction.

At this point, it is important to note that dark matter is still the commonly accepted theory used to describe the mass discrepancy seen in the universe. The overwhelming majority of physicists support dark matter and believe it more accurately fits the evidence we can see. MOND is widely considered a "fringe theory" though it is not considered a pseudoscience. Personally, I prefer MOND over dark matter simply because I think MOND is a more elegant explanation - but MOND needs a lot of work done before it will be able to replace dark matter, assuming it has what it takes. I think Richard Feynman puts it best, "It doesn't matter how beautiful your theory is, it doesn't matter how smart you are. If it doesn't agree with experiment, it's wrong. " Only time and hard work will tell what's in store for MOND.