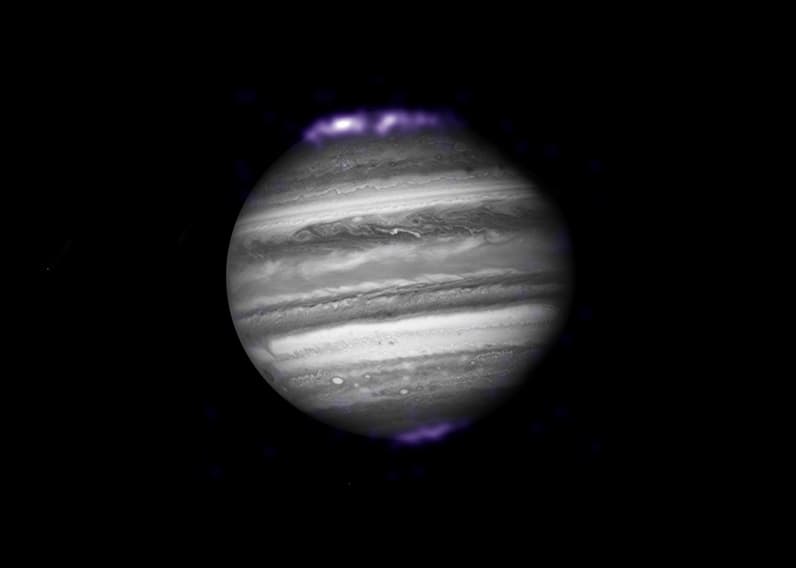 In 2007, a stunning image was produced though a collaboration of space and ground-based telescopes. Scientists working with NASA's Chandra X-ray Observatory and the Hubble Space Telescope worked together in order to provide us with a never-before-seen image of Jupiter. For the collaboration, Chandra took 5-hour exposures of the gas giant on February 8, 10, and 24th. The data was then placed together with the latest image from Hubble.

Here is the result...

In this composite image, we get a glimpse of auroras that are a thousand times more powerful than Earth's. The purpose of the Chandra collaboration was precisely to study these powerful X-ray auroras, which can clearly be seen flashing in violet near the poles of the planet.

Similar to the aurora that we see on Earth, scientists assert that, on Jupiter, the phenomenon is caused by interactions of sulfur and oxygen ions in the atmosphere with particles that are sent out from the sun on solar winds.

Ultimately, the only thing that rivals Jupiter's aurora are its storms.

The most famous storm in our solar system is undoubtedly Jupiter’s Great Red Spot. This enormous high pressure storm is similar to a hurricane on Earth, except that it’s huge. Amazingly huge.

The Great Red Spot is roughly 12,400 miles long and 7,500 miles wide (20,000 km by 12,000 km). So saying that you’ll be blown away by this storm is an understatement of epic proportions. Our entire planet would be blown away. Our measurements show that, even at its smallest, this storm could easily swallow two to three Earths.

Winds that speed around the edge of the Great Red Spot reach over 250 miles an hour (400 km/h). If you’re a wind surfer, this velocity might sound enticing. But the speeds are a tad too excessive. For comparison, hurricane Katrina was one of the most devastating storms ever to hit the United States. However, when the hurricane made landfall, it had wind speeds topping at just 125 mph (201 km/h). Not even close to Jupiter's storm.

To get some idea of what winds in the Great Red Spot are like, consider your arms, legs, and head flapping like flags in the wind. Not so fun.

Ultimately, such fantastic storms on Jupiter aren't surprising. The planet is some 11 times Earth's diameter and 20% larger than Saturn's. This makes it the largest planet in our solar system. In fact, it has a mass that is two and a half times that of all of the other planets in the solar system combined; however, as amazing as it is, its mass is still just one-thousandth of that of the Sun...