Amazing Images of the Aurora: 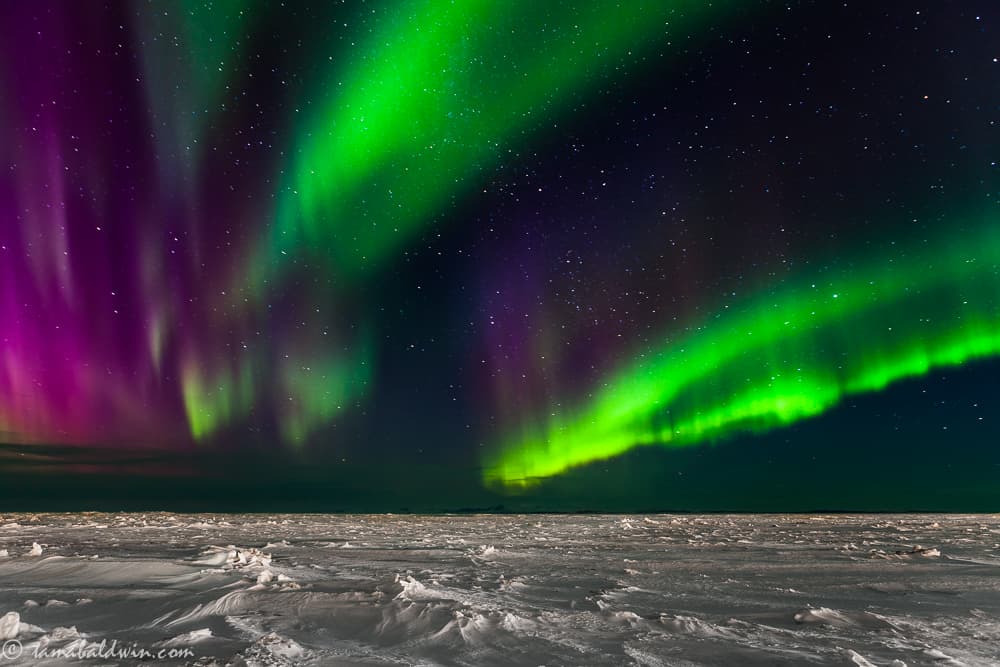 The aurora forecast from the Geophysical Institute at the University of Alaska, Fairbanks was a mere 2 out of 10 [which is not a very promising outlook], but a little before midnight I overcame my inclination to remain warm and safe, and I pulled on my terrestrial equivalent of a spacesuit, and dragged my best cameras into the subzero air.  I was in the “auroral zone” after all, that polar band of prime aurora viewing running roughly 10 to 20 degrees below geomagnetic north. The vapor lights of the village of Kotzebue obscured the sky, so there was nothing to be done but leave the land behind and pick my way out across frozen chop of the Chukchi Sea, where it quickly became clear that a 2  in the aurora forecast in the arctic, on a bone-chilling February night, can sometimes be well worth any discomfort you will endure.   The solar winds were blazing that night, pulsing deep into the magnetosphere—blue and green and red and blue blending with the red becoming purple, the red sheeting the stars, and what should have been darkness gloaming violet.

The displays lasted for hours and returned for several nights in a row and were at times so bright we could drive with the lights off when we headed out in the car and up into the tundra. The seasonally cold temperatures persisted, running as low as minus 40 with wind chill, and even when mercury climbed above zero the wind subtracted any gain and as an added bonus blew in fog from where the pack ice gives way to open ocean.  It was the fog I particularly loved photographing because the water vapor reflected whatever colors dominated the aurora that night. People who live in the arctic are often fond of telling people from the “outside” that the arctic aurora often appears to be right on top of them—so close you could seemingly touch it.  This was true to my experience, and though I am sure it has something to do with the optics of latitude, the fog only intensified that perception.

Clouds of mist glowing with color came rolling across the tundra, sometimes blowing right over us, settling in low points in layers of smoky green light.  One clear night while working in a cemetery we decided to try what an elder in the village had recommended to us—we whistled to summon the aurora closer—and as luck or chance or legend had it a magnetospheric substorm closed in and soon we were engulfed in the light of a corona burning neon green and blood red. The brightness became so intense any exposure longer than a few seconds blew out white and at one point we could see our shadows in the snow. For a few brief seconds it was hard to locate myself in time or space—it seemed I could be standing in any century or on some other as of yet unnamed planet.

You can see more amazing images and purchase prints at her website, which can be found here.