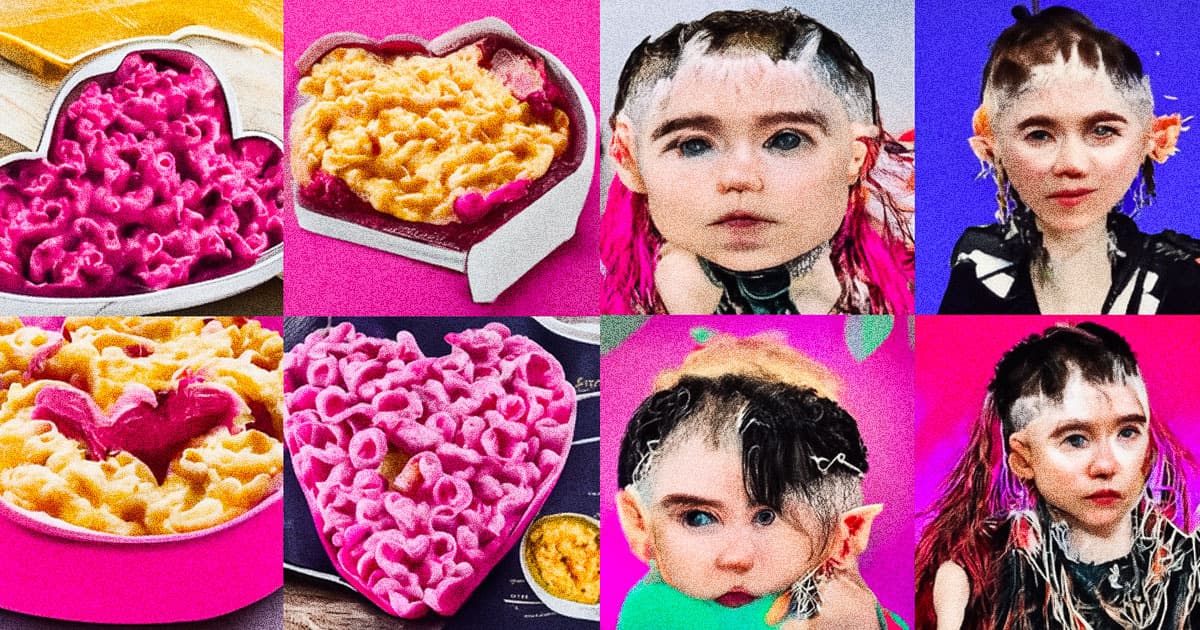 AI-generated images have always been creepy, but one artist's neural network-guided interpretation of BuzzFeed headlines takes it to a whole new dimension.

It appears that these otherworldly images created by generative artist Somnai, whose real name is Max Ingham, were prompted by an interaction with Max Woolf, a BuzzFeed data scientist. While quote-tweeting some of the artist's "needlepoint" work, Woolf quipped that he had a "legit need" to look into how well the fairly new neural network Contrastive Language-Image Pre-Training (better known as CLIP) would handle BuzzFeed's infamously-memeable headlines.

The results, which the artist posted a few hours later, are downright nightmarish.

From the diffusion-remixed version of the sickening 20 pounds of cabbage to the disgusting-looking pink Kraft mac and cheese, the food this generative artist and his AI dreamed up are downright nasty — probably because the source material was gross to begin with.

But the real icing on the cake, the pièce de resistance of the whole thing, is the way the neural network mashed up Grimes and Elon Musk to create a creepy-looking baby that feels very much like what Little X will look like once they're old enough to pick their own hairstyles.

`How I Cooked 20 Pounds of Cabbage`

`Grimes Just Gave Her And Elon Musk’s Baby A Haircut, And The Result Is Very…Interesting`

Beyond just understanding the assignment to an absolute tee, it's likely that Somnai's work — and other generative works of art like it — is so particularly fascinating to look at because it's built on the diffusion model, a newer type of neural network inspired by thermodynamics.

With applications ranging from greater predictive capabilities for MRI imaging to, of course, creating Eldritch horrors, this new type of neural network makes the "deep dream" AI-generated images of the mid-2010s seem like children's drawings in comparison.

It's worth noting that many of the artists that use diffusion models to generate art are selling them as non-fungible tokens (NFTs) — but as far as AI-generated art is concerned, these are a hell of a lot more interesting and unique than Bored Apes or 8-bit "CryptoPunks."

In less than a decade, neural networks have gone from goofy psychedelia to beautiful, phantasmagoric works of art. These may represent a tiny subsection of the NFT craze, but they do make it seem just a bit more redeemable.

Updated to reflect the artist's name and to clarify the diffusion model he used.

Read This Next
Shooting Feet
After Saying He Wanted an Open Algorithm, Elon Musk Just Fired the Twitter Team Responsible for Doing Just That
Bot-icelli
Sorry, But There's No Way Tesla Is Selling a Humanoid Robot Next Year
ElonAI
Elon Musk Says Tesla Robots Could Achieve AGI
AI Comrade
Grimes Says AI Will Usher in an Era of Luxurious Communism
I'm In
Elon Musk's Question for Super-Smart AI: What’s Outside the Simulation?
More on Artificial Intelligence
Code Red
Yesterday on futurism
Google Issues Warning About AI-Generated Content About Health and Finance
Participation Award
Yesterday on the byte
Google Invests $300 Million in AI That Passed Law School Exam
Binged Up
Yesterday on the byte
Bing Executive Says He Has His Sobbing Under Control
READ MORE STORIES ABOUT / Artificial Intelligence
Keep up.
Subscribe to our daily newsletter to keep in touch with the subjects shaping our future.
+Social+Newsletter
TopicsAbout UsContact Us
Copyright ©, Camden Media Inc All Rights Reserved. See our User Agreement, Privacy Policy and Data Use Policy. The material on this site may not be reproduced, distributed, transmitted, cached or otherwise used, except with prior written permission of Futurism. Articles may contain affiliate links which enable us to share in the revenue of any purchases made.
Fonts by Typekit and Monotype.