Acanthamoeba: Terror in the Eyes 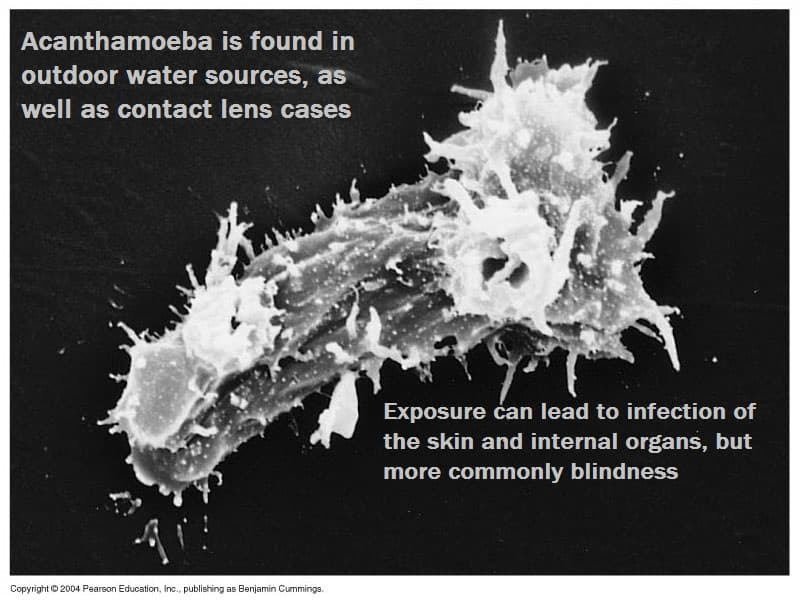 Lurking in Earth’s soil, bodies of water, as well as swimming pools and tap water, Acanthamoeba has quite the nefarious mission. If successful, this microscopic organism will infect a victim’s brain and spinal cord causing vomiting, confusion, hallucinations, blindness, and eventually death.

In 2010 a study was published in BMC Microbiology’s journal stating that after a group of locusts (aged 15-30 days) were injected with Acanthamoeba, they displayed infection of the brain and a 100% mortality rate within 11 days. But locusts aren’t the only organism that can be affected by this deadly amoeba.

Humans are at risk for contracting this mean little amoeba, though it is classified as a “rare disease” by the CDC. There are basically two ways in which Acanthamoeba enters the body, through an open wound or nostrils (Disseminated infection), or directly into the eye from contamination, each scenario producing varying consequences.

Disseminated infection is caused when a person comes in contact with through an open wound or cut, or through the nostrils. The amoeba then travels through the bloodstream, affecting the skin, lungs and other organs either individually or collectively. When left untreated, much like the locusts above, the Acanthamoeba infects the brain causing a range of symptoms, including Encephalitis, which is a swelling of the brain. Other symptoms are as severe as seizures, loss of senses, and hallucinations. While medical experts don’t understand much about Acanthamoeba affecting the brain and nervous system, we do know if not treated, the resulting disease is often fatal.

Eye contamination occurs when water or debris containing the Acanthamoeba comes in direct contact with the eye, the result of this contamination is called Acanthamoeba Keratitis. Acanthamoeba Keratitis begins with a painful infection of the eye, where the cornea is inflamed and eventually the amoeba starts to break down the cornea and surrounding tissues. If not treated immediately while the infection is localized to the cornea, the amoeba moves to the inner regions of the eye, which leads to the loss of vision. More unsettling, a study was done which tested the cases of 102 contact lens wearers, out of this sample 43 had considerable numbers of bacteria, and seven housed our famed Acanthamoeba.

Six out of the seven owners of the contact lens cases that contained Acanthamoeba reported cleaning the cases using commercial cleaning solution and correct cleaning procedure.

There is hope at the end of the day, the majority of reported cases of Acanthamoeba infection in the brain, organs, skin or nervous system, happens in individuals which already have a compromised immune system, there are however no such restrictions for Acanthamoeba Keratitis introduced directly to the eyeball.

Acanthamoeba is one nasty little microbe. One dip into a dirty lake, or a splash of not so great tap water into a paper cut could result in pain and suffering – but probably not. Humans ingest many Acanthamoeba throughout our lives, and as long as our immune system targets the amoeba and destroys it we’re fine. Contact wearers: mind your cleaning habits, because sometimes even the prettiest eyes can be destroyed by these little guys.