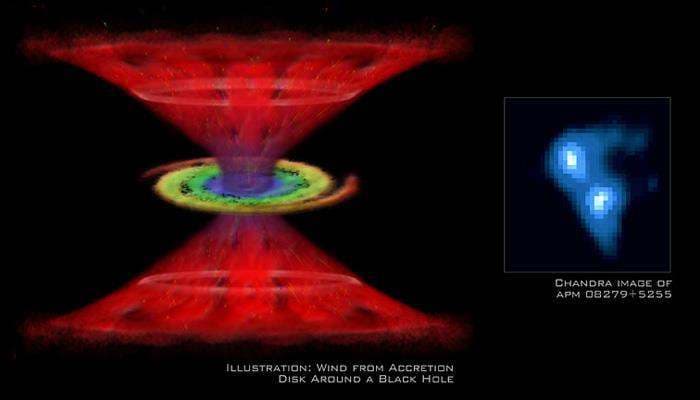 In the words of Douglas Adams; astronomers have found some insanely weird and massively huge things in space. Mind bogglingly big. Some of those things are often inexplicable, but it's always cool to see them try. One of which, is a Quasar named APM 08279+5255 that's 12 billion light years away and it's producing a huge mass of water that's 100,000 times more massive than the sun. That's at least 140 trillion times the amount of water that's contained in all of the oceans on the Earth.

Keep in mind that a quasar is produced by a huge black hole that is steadily consuming a surrounding disk of gas and dust in an accretion disk. As the black hole continues to eat the matter, it spins faster and faster which heats it up and gives off energy (more than 20 billion times the energy of the sun) and light. Scientists believe there is enough gas currently being spun by the quasar for the black hole its home to, to continue to grow until it swells up six times its current size.

Because this particular distant quasar is so far away, we're looking back at a time when the Universe was just 1.6 billion years old. This is important for 2 reasons. First, it shows that water is pervasive throughout the Universe, even when it was still relatively young. Second, water vapor is an important trace gas that reveals the properties of the gas that's being bathed in both x-ray and infrared radiation and how the quasar uses it. For example, analyzing the water vapor shows how the radiation heats up the rest of the gas. This particular quasar has water vapor distributed around a black hole in a region that spans a few hundreds of light-years across, and its presence indicates that the gas surrounding this area is five times hotter and 10-100 times denser than what's typical of galaxies like ours.

There are two fates in store for the quasar: it's believed that the massive amount of gas will eventually be ejected into interstellar space, or it will coagulate into stars.