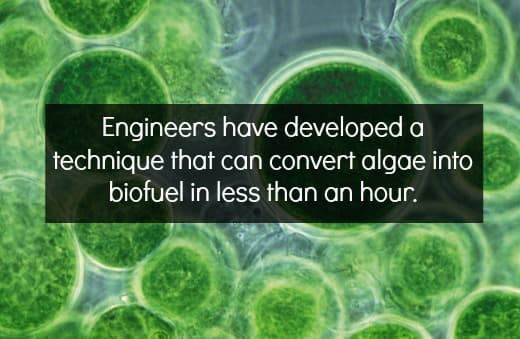 All of you who have a swimming pool or garden pond will know the annoyance we're about to discuss--the slimy green goo: Algae. It's horrible for us  to swim through, but much worse for the poor fish; however, there is a brighter future ahead! But before we get carried away, yes, you will still have to clean that sludge out of you pool, but perhaps knowing this will allow you to do so with glee.

It's not a new idea, but. during the first energy crisis in the 1970s, amidst a host of forays into practical alternatives for oil, it was found that these slippery, single celled plants would effectively break down  into something that could push a car. Gasification is one way of turning organics into a crude oil facsimile.

Unfortunately, for all of these clever ideas, there has always been a bit of a problem with the economics....

Most all of the methods currently used involve too much of at least one thing: time, equipment, energy, or (you guessed it) money. So we keep doing the same old thing, poke holes in our precious planet as we hope (truly hope) that the oil will never stop flowing. Regardless of how you feel about anthropogenic global warming, it is problematic when a resource that is the undisputed foundation of our technological civilization, instead of becoming cheaper, is becoming increasingly more expensive. So no matter what side you choose in the climate debate, the bottom line is exactly the same for all of us--we need alternatives.

Luckily, scientists have kept hammering at the problem and progress was bound to be made eventually. At the U.S. Department of Energy's Pacific Northwest National Laboratory in Richland, Washington it seems that they have made a breakthrough at last.

THE PROBLEMS WITH ALGAE:

Some types of algae are more efficient than others. When pinpointing one specific thing, the lipid content seems the largest contributing factor. Depending on the content, a kilo will either power an SUV or mow a small lawn.Unfortunately, the most effective forms of algae are also the most exotic species of algae, and those generally don’t multiply fast enough to suit our purposes.

Plus, algae is wet, very wet. So wet, in fact, that the only real way to use it as a viable source of energy is to dry it out... at massive costs. Growing them and drying them in large enough quantities is proving to be a major hurdle. To provide the U.S. with enough algae to support their daily appetite, it would require an amount of algae equal in surface area to the state of Maryland; however, that's still ten times smaller than what would be needed for providing enough biodiesel from corn or soy; that would have to be half the landarea of the U.S.A. Additionally, even if we were able to grow that much algae in order to meet out needs, it would be problematic as Algae blooms are quite destructive. They can literally choke the life from a region; however, most worrying are the toxic species. If it becomes profitable to tinker with the genome of one of those, a corporate sense of ethics might be all that stands between us and environmental pandemonium.

So algae blooms are no joke. Even if the species involved is not toxic (and most of them are not), they can still do plenty of harm. Simply blocking sunlight will stifle the growth of, or even kill, the marine flora (which forms the basis of many underwater food chains). At night,  algae will use more oxygen than they produce (no photosynthesis). Compounding that is the fact that, as algae die and decompose, they use up even more oxygen. In short, the day that there is an algae bloom is not a good day to be a fish.

In addition, to turn algae into oil, you have to be able to grow enough of them to begin with, and most studies show that contamination with other organics would severely limit productivity.

To tackle the issues outlined above, we've come up with a few ideas. The team at PNNL has found that algae can be cooked into Bio Crude in one short step. Hydrothermal Liquefaction (HTL) is a deceptively simple concept that will turn fresh algae, still suspended in water, into a crude oil substitute in under an hour! That, in turn, can be refined into bio-fuels, mainly gasoline and diesel. On top of that, this process also produces fuel gas, clean water, and some of the key nutrient for growing algae. Now, this has been done before, but now, the researchers have managed to tweak the process in such a way that the system can run uninterrupted. That is the only way to go if it is to be done on an industrial scale -- and is the little detail that might make all the difference.

In essence HTL is pressure cooking with a vengeance. In order to reshuffle the molecular makeup of the algae, you need to mimic the hellish conditions that made original crude oil. Lots of heat and plenty of pressure; specifically 350 degrees Celsius (662 degrees Fahrenheit) and 200 bar (2900 psi). There is a range of temperatures and pressures at which this can be done. The temperature is about as high as it can go, while the pressure is average. Speculating a little, this is probably done in order to get the process to move along more quickly (after all, chemistry speeds up exponentially at higher temperatures).

Now for the bad news. Enter the showstoppers. So far, it has only been done in a lab. Just because it has been done in a lab, it does not mean it will scale up without problems. Since this system will have to be set up from the ground up, it will be a major investment. The people providing that money will want rock-hard guarantees. People, and therefore corporations, have a tendency to resist change. Business deals have been long established and the infrastructure is already geared towards traditional crude oil. This works against any alternative forms of energy, as it will require a substantial shift in operating the oil industry (which means new expenditures, which most businesses do not like).

However, as previously mentioned, the price of oil is only going up. And when they feel the pinch in their wallets, things will move. On the bright side, it is worth mentioning that Exxon has invested $600 million into the development of algae based fuel in a three and a half year project. That is not a token amount of money.

Yet, the Exxon project came to the conclusion that it would be at least another 25 years before anyone is capable of growing enough algae. They were trying to cultivate a new breed that would not just be productive in providing oil, but also in providing more of their own. This particular Exxon project was done before the team at PNNL had their breakthrough, so this might change the whole character of the game.

In the end, keeping civilization running will require a bit of hard science and a bit of foresight. I, for one, look forward to buying tickets to watch the oil moguls come and slug it out...trying to stake their claim in the nearest stagnant pond.