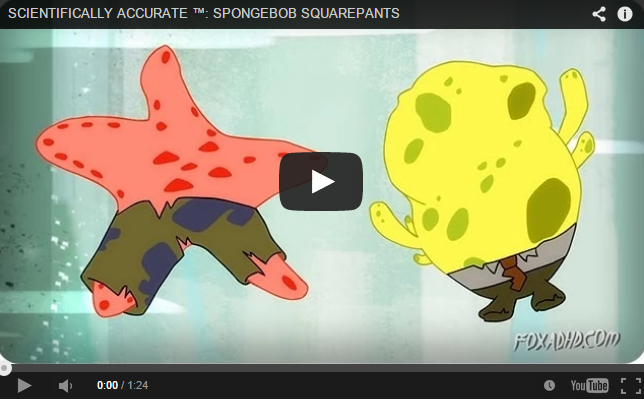 Even if you aren't a cartoon fan, when someone asks, "who lives in a pineapple under the sea," you always know the answer without hesitation: Spongebob Square Pants, duh. The show centers around a talking sponge and his shenanigans with his bestie, a starfish named Patrick (they live in Bikini Bottom, surely we don't need to point out the potential hilarity there).

Obviously, scientific accuracy is pretty far down on the list of reasons anyone watches cartoons, let alone cartoons like Spongebob. Television is an escape from reality, but that doesn't mean the scientific inaccuracies aren't glaring at times. For scientifically-minded people, this makes "Animation Domination's" video series about scientifically accurate cartoons all the more satisfying.

In one edition, they tackled Spongebob. The results of which can only be described as... I don't know. You tell us.

Science: ruining Spongebob, Spiderman, Sonic the Hedgehog, Mutant Ninja Turtles and Pokemon, since before you were born.