A Photon's Journey Through the Sun 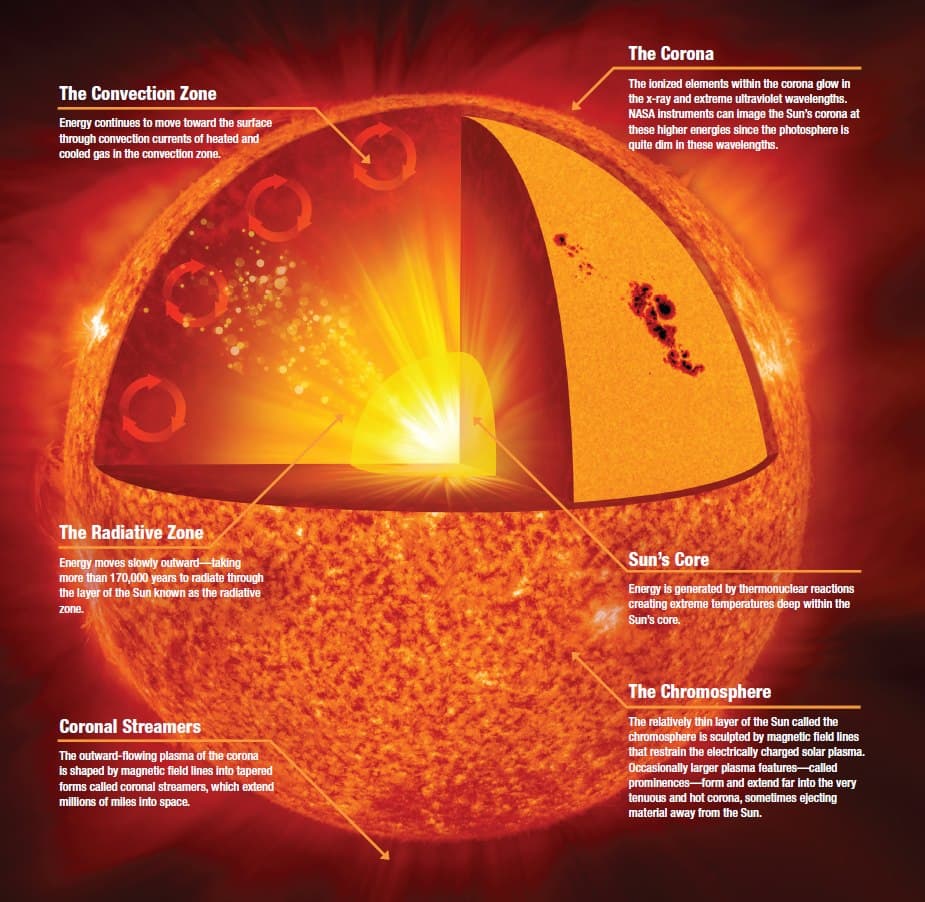 The photons that comprise the sunlight that's hitting you at this very moment (if you're outside and in America) has spent the past 8 minutes, and 20 seconds traveling from the sun's surface all the way to your windowsill (or wherever you happen to be)-- a journey of a staggering 92,960,000 miles (149,600,000 km). But that's not the whole story. Those photons embarked on a journey that began in the core of our parent star, and they spent a considerable amount of their tenuous little life-spans trying to break free of the sun's successive layers, before finally emerging from the sun's photosphere.

Lets look at why that is:

First, The center of the sun has an estimated temperature that reaches about 15,700,000 K (or 27,000,000 °F), while the temperatures of its photosphere typically hangs around 5,780 K (5,500 °C or about 9900 °F). Ironically, the sun's corona is hotter than the sun's surface, at about 5,000,000 K. It's safe to say that the sun is a very weird contraption: a perfectly spherical blazing hot ball of superheated plasma, held together by the immense force of gravity (the weakest of the four fundamental forces of the universe). It's this heat and pressure that allows stars to undergo stellar nucleosynthesis within their cores, thus allowing light elements (such as hydrogen and helium) to fuse into the heavier elements that comprise the bulk of the human body.

COMPLETION OF THE JOURNEY:

After their inception, the photons must travel through the sun's layers. They start at the core, then move to the radiative zone (the thick layer where the sun generates x-rays and ultraviolet radiation, and where most of the collisions occur), then the convective zone (where the heat is transferred through the sun by convection), to finally the photosphere. This process is estimated to take anywhere between 100,000 to 50 million years to complete.