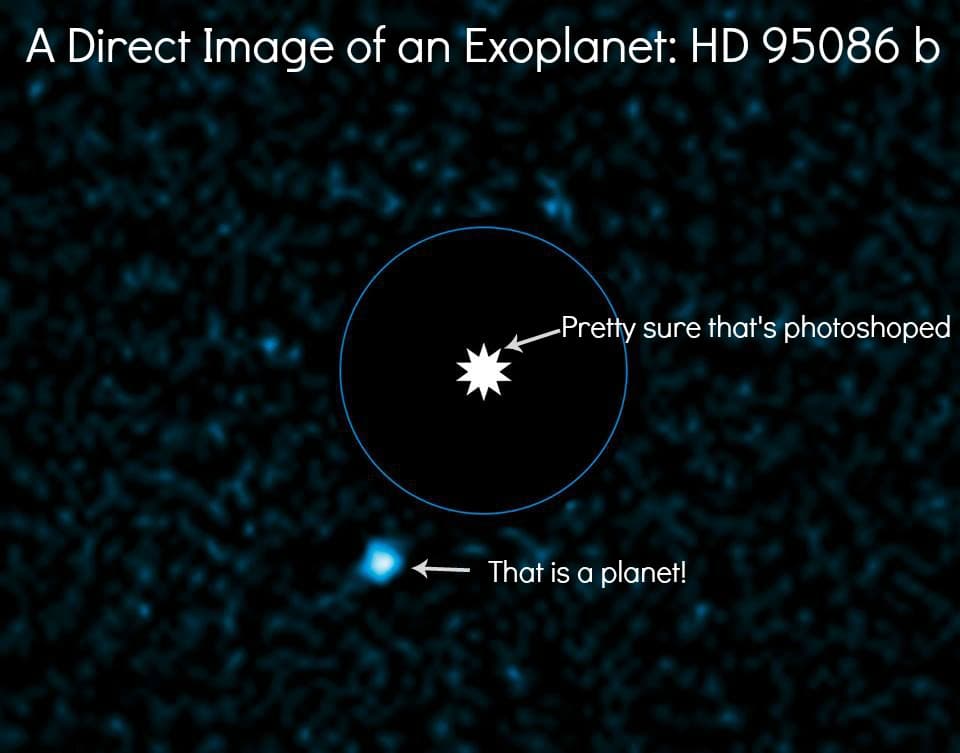 Out of all the planet detection methods that we have, the radial velocity method and the transit method are two of the most successful. However, no matter the method, directly imaging exoplanets is difficult and problematic. As you can image, from a certain distance, light reflecting from a planet is easily overshadowed by the immense luminosity of its parent star. This is especially true for the planets that orbit at about the same distance as Mercury in their respective solar system. Because of the challenges involved in imaging these objects, we only have direct images of about a dozen extrasolar planets (whilst more than a thousand have been found, and a plethora more are still awaiting confirmation, which will come with prioritized additional observation hours)

Now, more than 15 years after the first exoplanet was discovered and nine years after the first of those planets was imaged, ESO has again captured a direct image of a nearby exoplanet. This planet, christened HD 95086 b, orbits a young, sun-star, dubbed HD 95086, located about 300 light-years from Earth (in the constellation of Carina, the keel). Looking at the image, the planet is located just to the bottom left of the circle, which blots out the bulk of the starlight that obstructs our view of HD 95086 b.

Granted, the image is not exactly what most would consider awe inspiring. It looks absolutely nothing like the beautiful artists' rendering of distant planets, but this image is still worth something because, unlike those beautiful planets depicted by artists, this photo is real. And this particular planet is unlike anything captured before it. As the planet is not only distant, but very light. In fact, it's the lightest planet ever discovered.

To directly image the star and its orbiting planet, Astronomers from the European Southern Observatory (located in Garching bei München, Germany) used a special adaptive optics instrument on its Very Large Telescope. This instrument aids in removing the blurring effects caused by Earth's atmosphere, (one of the reasons that directly imaging exoplanets is difficult using earth-based telescopes). This allows for a sharp, clear image. After which, the star and its exoplanet were looked at at infrared wavelength. Whilst employing a tactic called "differential imaging," they were able to determine the planets age, mass, and orbital characteristics.

What they found is that the object is a super-Jupiter exoplanet, having four or five times the mass of Jupiter, the largest planet in our solar system. It orbits its parent star from a distance of about 56 AUs (Earth/Sun distances), or about twice the distance between the Sun and Neptune, our most distant planet. The star's age comes in at 10 to 17 million years old, which indicates that the star is still wrapped in a protoplanetary cocoon, perhaps in the process of forging more planets.

Team members are unsure of the planet's original location in respect to its star. It's possible that the planet formed much more closely and was sent outward after deviating from its original course. Astronomers will keep a watchful eye on the system, as it has potential. HD 95086 b does, in particular. At this point in its evolution, the planet remains cool, with a surface temperature that is less than 700 degrees Celsius, which is cool enough to allow for the formation of water vapor. Possibly even methane in the near future.