A Brief History of Martian Missions 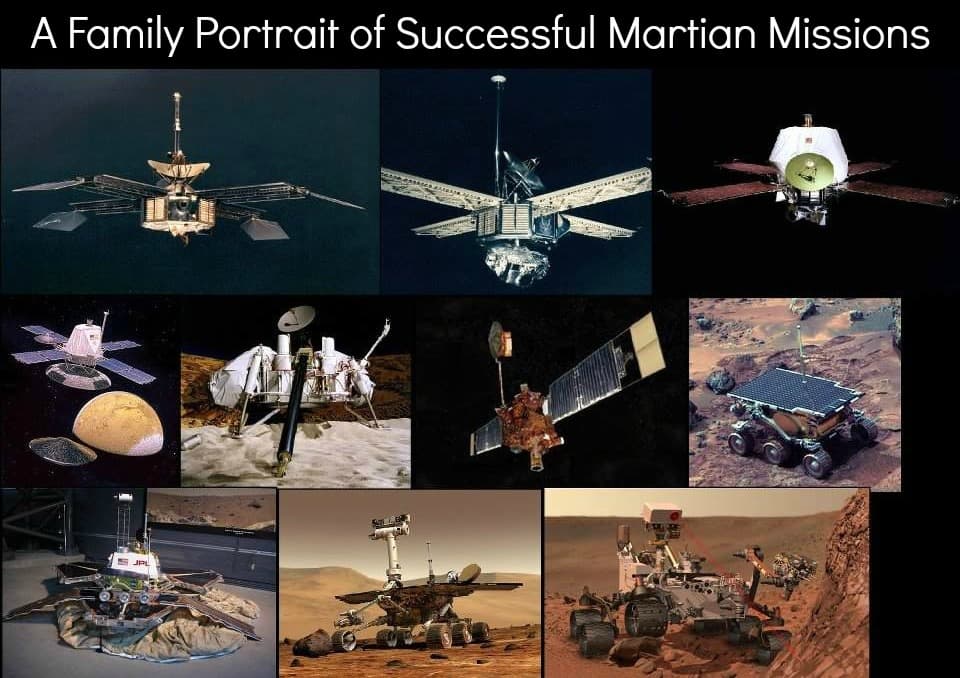 Mars has been a target for our missions ever since the dawn of the space race. The planet, which is named after the Roman god of war because of its red blood-like appearance, has certainly claimed its fair share of missions. The nations of the world have made 40 attempts to reach Mars. Of those attempts, 24 have ended in failure. The United States alone has sent 19 missions to Mars (Curiosity is the nineteenth mission). Of those, only five have failed. Things continue to look up when you consider the United States’ success rate at landing on the Martian surface. Of their seven Rover and Lander missions, only one has crashed. In 2012, the World’s 40th mission to the Red Planet will be a stunning success.

As expected, the missions to Mars have come a long way since the successful flyby of Mariner 4. I would like to pay tribute to the some of the successful missions which have revealed the splendor of our closest celestial neighbor and paved the way for Curiosity.

Mariner 4, in conjunction with Mariner 3, is part of the Mariner-Mars 1664 group. Unfortunately, Mariner 3’s shroud failed to open, preventing the spacecraft from receiving sunlight. This ultimately caused the probe to run out of power and die. Mariner 4, on the other hand, was far more successful. This probe preformed the first successful flyby of another planet, and returned 21 ‘close-up’ images, the first images of another world taken in this manner.

Mariners 6 and 7 were also flyby missions, returning a combined 201 images of the Martian surface. These spacecraft flew over the equator and South Pole regions of the Red Planet and collected data about the Martian atmosphere and surface. Together, they mapped about 20 percent of the planet’s surface and, by chance, missed the giant northern volcanic plateau (called Tharsis) and the equatorial grand canyon (now called Valles Marineris after Mariner 9). However, these probes did prove that the dark lines on Mars, thought to be canals for nearly two centuries, weren’t canals at all.

Mariner 9 became the first spacecraft to orbit another planet on November 14, 1971 (barely beating the Mars 2&3 spacecrafts launched by the Soviet Union). When Mariner 9 arrived, Mars was in the middle of one of its iconic global dust storms. Eventually, when the storm cleared up months later, Mariner 9 was able to send back clearer pictures of Mars. 7,329 images later, the spacecraft mapped the entire Martian surface, discovering objects like Olympus Mons, a plethora of canyons, Valles Marineris, and more.

The Viking missions consisted of two spacecraft, each of which also had a Lander. The primary objectives of the mission were to take high-resolution pictures of the surface and to search for evidence of life, in addition to collecting atmospheric data. According to NASA, “The results from the Viking experiments give our most complete view of Mars to date.”

After spending more than nine years in orbit, the Mars Global Surveyor holds the record for longest Martian orbit. The Surveyor has also taken more images than all of the other Mars missions. Because of its long mission, the spacecraft was able to take before-and-after images, which helped scientists identify changes in features on the Martian surface.

The Mars Pathfinder is a vehicle set which consists of a spacecraft, a Lander (later renamed the Carl Sagan Memorial Station), and a rover (named Sojourner). In addition to several scientific objectives, the Pathfinder project was a technology experiment, an experiment that did very well and helped pave the way for future rover missions.

These are probably some of the most well know vehicles in our 4-decade exploration of Mars. The Mars Exploration Rovers, Spirit and Opportunity, have returned an incomprehensible amount of data. In addition, both vehicles lasted much longer than expected. Of the two rovers, Opportunity is the only one still functioning. Spirit, was sand trapped in 2009, after attempting to free it, scientists were eventually forced to abandon the campaign. The primary mission for these rovers was to explore the Martian surface and conduct geological experiments.

Nicknamed Curiosity, the MSL is the most advanced rover we have ever sent to another planet.  Already, Curiosity has discovered that Mars once had flowing water on it's surface, that Mars was once capable of supporting life, and more.  Curiosity follows in the footsteps of some spectacular failures and extraordinary successes. I eagerly await the continued success of the Curiosity’s mission. One thing is curtain, if Curiosity is as durable as Spirit and Opportunity, it'll be around for a very long time.