A Beautiful Web in The Tarantula Nebula: 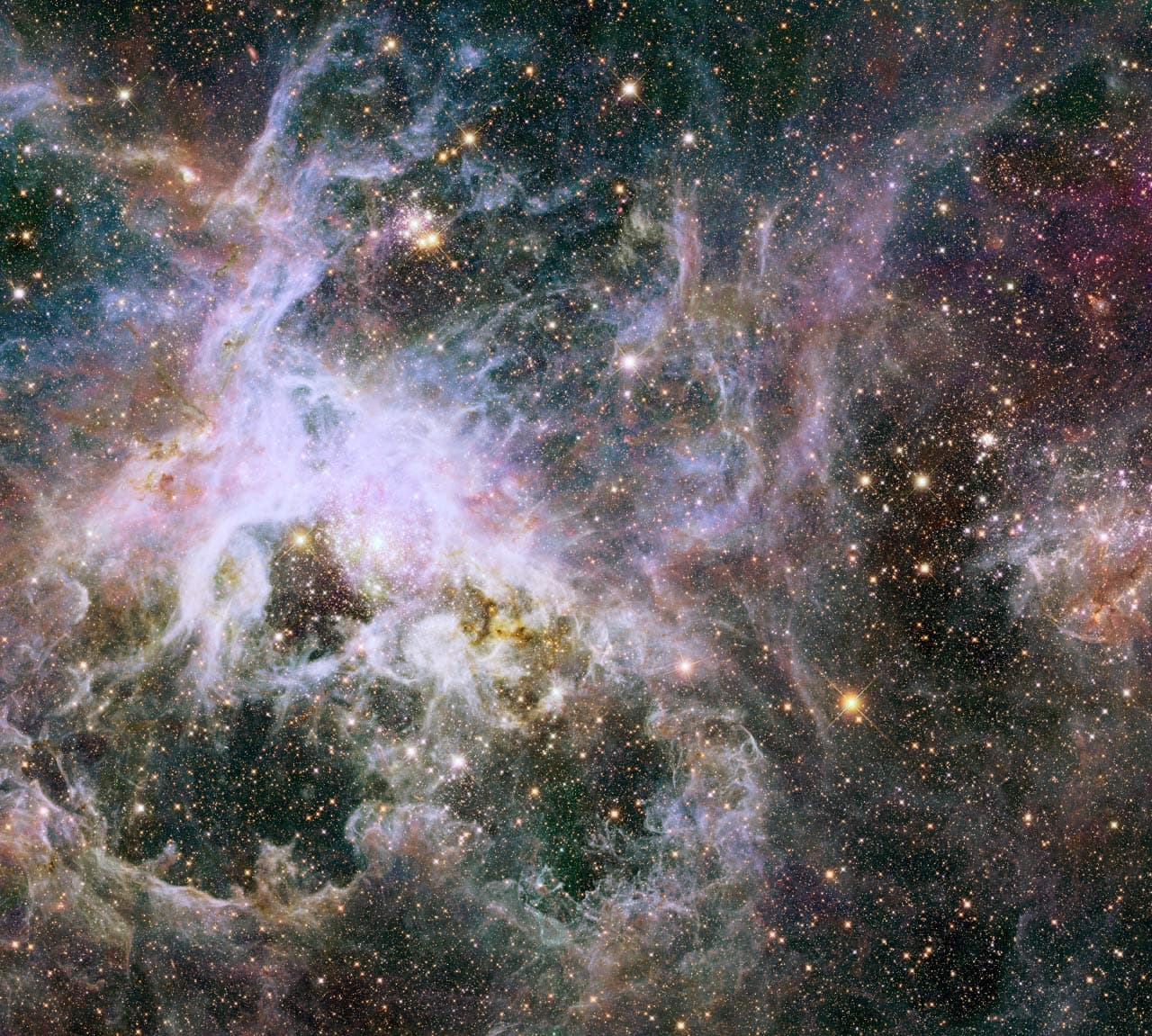 For a long time, this cosmic structure was thought to be a star, until 1751, when Nicolas Louis de Lacaille discovered its true form. Located about 159,800 light-years from Earth on the edge of the Large Magellanic Cloud, in the Dorado constellation, this is the Tarantula Nebula (also known as NGC 2070). It has a magnitude of 8. This makes it impossible to discern with the naked eye, yet makes it the brightest nearby star-forming region. In fact, the Tarantula Nebula is known for being the most active starburst region in the Local Group of galaxies. With an estimated diameter of some 1000 light-years, it is home to about 800,000 stars, and it hosts some of the most massive stars in our neighborhood (four of them are supermassive).

Starburst started in this nebula tens of millions of years ago, and it wasn’t confined to a specific region. Instead, gases accumulated and created pockets of hydrogen generating starbursts.

Until the discovery of the amazingly massive objects in R136, it was believed that that the upper limit for stars formed in the present day universe was about 150 times the mass of the Sun. However, the supermassive stars located here are  so large that they are challenging our previous assumptions. Do we really know the process of star-birth? Or is star-birth just happening differently from the rest of the Universe in this region?

Astronomers set out to answer this question, and in 2010 a team of astronomers from the University of Bonn in Germany suggested that these stars formed as a result of star mergers in the closely packed region. To support this theory, they modeled the interactions between stars in a R136-like cluster and then a computer simulation assembled star by star (to make it very similar to the real one). This was a model of a cluster of over 170,000 stars packed together. These simulations were extremely complex, as this system changes A LOT over time: more than 150,000 equations had to be solved many times by the model. The simulation is further complicated because of the effect of nuclear reactions, the subsequent energy released by each star, and by the collisions between the stars (which happens often in such a crowded region). These complex calculations are known as "direct N-body simulations,’’ and they are the most accurate ways to recreate a star cluster.

Ultimately, these collisions make the formation of the massive stars a lot easier to explain. Nevertheless, despite all the knowledge mankind has accumulated over the years, there are still things that we don't completely understand. Yet, we must never see unique rebels such as R136 in a negative way, because it’s those rare and unique pearls like R136 that push us forward in our understanding of the universe.