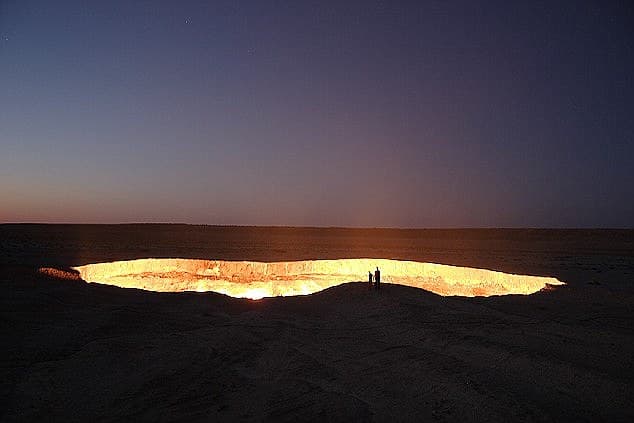 Earth hosts a number of amazing storm systems, one of the most impressive sends out some 1,176,000 lightning discharges per year. Many nights, over 40,000 bolts spread across the night sky. This phenomenon happens some 300 nights a year and continues for nine hours at a time. This is known as the "Relámpago del Catatumbo" (Catatumbo lightning). In order to see it, you will need to head to the mouth of the Catatumbo river at Lake Maracaibo (Venezuela). Amazingly, this everlasting storm is believed to be one of the greatest generators of ozone on the planet. This determination is based on the intensity of the cloud-to-cloud discharge and impressive frequency. According to storm chaser Dan Robinson, the storm is produced by thunderstorm complexes that form due to 'diurnal' (meaning on a day/night cycle) wind patterns, which result from the local topography and maritime factors.

Volcanic lightning has been said to be the most beautiful natural event on Earth. While it’s rare, those who have captured its intensity on camera describe it like a legend – researchers can’t describe it much better either. This lightning is as hard to study as it is beautiful, for more than one reason.

Martin Rietze, a German photographer who travels the world to capture these electrifying events explains to io9.com that smaller volcanic eruptions lead to less intense electrical storms, which can be hard to spot through the thick plumes of ash and rock spewing from the volcano. To make things more difficult, the lightning is most active during the beginning of the eruption, giving an added challenge (and danger) to photographers and researchers.

Rietze points out, “you will always arrive too late” unless you happen to be documenting the eruption at its start. As you may recall from above, in thunderstorms, ice crystals rub together to produce an electrostatic charge. When that charge finds an opposite charge, a connection happens, and we get lightning. Replace ice with volcanic rock and ash, and you've got lightning rumbling through the ash cloud above a volcano, simple… right?

6) Fire Rainbows: Paintings in the Sky:

These phenomena are actually clouds that have been (figuratively) set aflame. The clouds display such fantastic colors because of water droplets that happen to be nearly uniform in size. As a result, the clouds refract light in a similar manner.

Notably, this can only occur when the Sun is higher than 58° above the horizon, and it generally occurs when light is passing through cirrus clouds, in particular. As National Geographic notes, “When light enters through a vertical side face of such an ice crystal and leaves from the bottom face, it refracts, or bends, in the same way that light passes through a prism. If a cirrus’s crystals are aligned just right, the whole cloud lights up in a spectrum of colors.” More properly, this event should be called a circumhorizon arc.

As Atmospheric Optics notes, “it is a very large halo and always parallel to the horizon. Often only fragments are visible where there happen to be cirrus clouds – the individual patches of cirrus are then lit with colour that can be mistaken for iridescence. High sun infralateral arcs occupy a similar position in the sky. The infralateral arc curves upwards from the horizon slightly and this is best checked for visually because lens distortions invariably also show the circumhorizon arc as curved.

High in the Andes Mountains of Argentina and Chile, one can find “forests of ice”, structures called Penitentes. To the locals of the Andes area, these formations are mystical, yet ordinary – as forests of ice are quite common in the Andes mountains. These peculiar formations call monks to pray and even inspired Charles Darwin as he had to squeeze his way through them on his way to a city in Argentina. There have been many theories from native peoples as to how the snow of the high Andes forms into tall spikes standing over two meters high, from witchcraft to wind. Only recently was it discovered that the phenomenon is due to sublimation of snow.

A supercell(also known as a rotating thunderstorm) is a type of thunderstorm that forms in the presence of rotating updraft. Overall, supercells are less common than a classic run-of-the-mill thunderstorm, which is fortunate since supercells have the potential of being very severe. They are most commonly identified by their ominous rotating structure and usually occur in arid climates (such as the Great Plains of the United States), but supercells can form anywhere in the world under the right conditions. Watch one forming in the video above.

3) Waterspouts: The Fountains in the Sky

A waterspout is a kind of tornado (a kind of terrifying tornado, if you happen to be in a boat. Waterspouts are exactly what the name implies: They are huge funnels of water that look like a running faucet. They can only form over water. As a result, they are not very threatening (unless, as was mentioned, you happen to be in a boat). These spouts can reach speeds of up to 190 miles (305 kilometers) per hour. Many scientists speculate that a number of the world's mysterious shipwrecks—such as those within the Bermuda Triangle—occur because of waterspouts.

The "door to hell" is not the remnants of a strange alien attack. Rather, it is an enormous pit of fire that can be found in the heart of the Karakum Desert. This pit has been burning for more than 40 years, and one could argue that it is not exactly "natural" as a few geologiests accidentally set said pit on fire. The hole is located in Derweze, in the middle of the Karakum Desert in Turkmenistan.

The geologists were worried that the hole would lead to the release of poisonous gases, so they decided to (try to) burn it off. They hoped that the fire would burn all the fuel within days. They were wrong, very wrong. The gas is still burning today. The hole is 230 feet wide (70m).

Sinkholes are terrifying monsters are massive holes that open up in the Earth without warning. They can be as small as a car, or they can span hundreds of acres. Some dip just a few meters into the earth, while others are over 600 meters (2,000 feet) deep. These beasts have swallowed people, cars, trees, and even entire houses or city blocks. Sinkholes are terrifying; they are unstoppable; they are deadly; and they are almost entirely unpredictable.

Sinkholes (also aptly known as “sinks”) owe much of their creation to water. Most often, these gaping maws form because of the extreme erosion that is taking place in the rocks beneath the soil. Sinkholes generally develop slowly as bedrock is whittled away by water, but sometimes, when there has been enough erosion and the pressure is just right (or just wrong), the ground will give way all at once–swallowing trees, people, and anything else unfortunate enough to be standing in the immediate area.

Of course, sinkholes are not terribly common. So you do not need to fear being consumed by the Earth while you sleep (though that’s exactly what happened to one man in Florida); however, it is extremely important for city planners to take erosion into consideration during the building process. Failing to do so has proven to have deadly consequences.