7 Ways We could Prevent a Global Killer: Impact Events 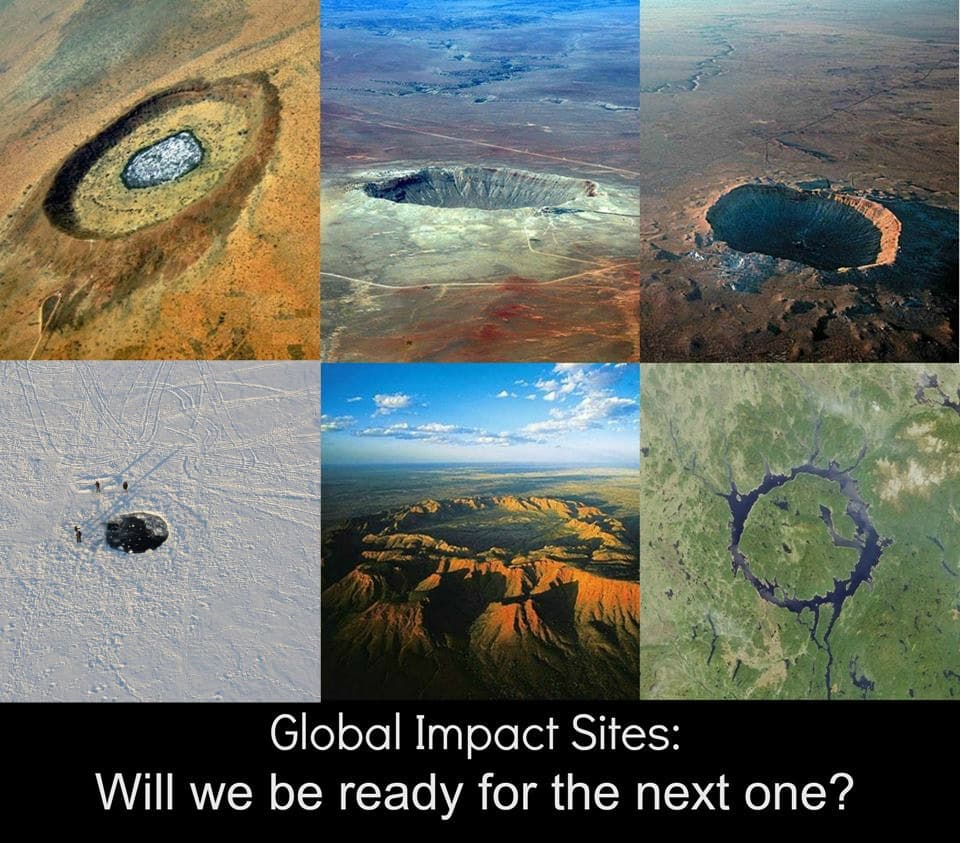 This image is the Barringer Crater, or Meteor Crater, which is said to be the best preserved site on Earth. The meteorite crater was created about 50,000 years ago on the Colorado Plateau. The area is now very arid; however, believe it or not, at the time of the impact the land was grassland and forests, The actual crater itself is about 120m (393 feet) across and over 170m (557 feet) deep at its center.It is believed that the meteorite that did this damage was composed of iron and nickel, and that it was roughly 50m in diameter (164 feet).

Today, such an impact would cause serious, localized devastation. Depending on where it hit, it could result in a substantial loss of life. But what would happen if we were faced with a real threat—a global killer? Would we have the means to destroy it or knock it off course? Indeed, would we have any real options?

The chance of an asteroid hitting Earth is the same as it has always been, and small impacts have been dotted throughout history. But large impacts are much rarer. The most notable of the large impacts is the 10km (6.2 mile) object that is widely accepted to have kicked off the dinosaur’s extinction some 65 million years ago.

Currently, NASA is working to detect as many NEOs (Near Earth Objects) as possible. This work involves identifying all those that are greater than 1km across (these are the ones which could pose a threat to life on Earth). Many different strategies have been proposed for a space protection programmed in case we do detect such an asteroid. These ideas range from nuclear weapons to using the power of gravity to prevent a collision.

So, what are our options?

First off, unless the object was very small, or we magically gained access to some (as yet) undiscovered technology that provides us with a huge amount of energy, we won’t be able to destroy or vaporize it while it is still flying through space. This is simply beyond our capabilities. The easier approach to tackling a global killer is to provide a sufficient ‘kick’ to knock it off course and ensure that it will miss Earth. It sounds obvious, but the only difficulty with this method is that the object is still there, sailing throughout space. This means it will come back round again... and again...and again. It is possible that, eventually, it will be back on a collision course with the Earth.

Still, this could be a way to deal with the object in the short term. Our options here involve direct contact with the object, such as using nuclear blasts, controlled collisions, or attaching rockets to the object. Then there are those that don’t require contact, like including an ion beams, solar energy, or gravitational power. These are all relatively undeveloped ideas, but let's take a brief look at each one.

Nuclear blasts: A nuclear explosion could be used in a variety of ways; first, it could be used to blast off enough material with enough power to change the objects momentum slightly. The bombs could also be positioned near the object but not close enough to damage it, so no small pieces would break off and head towards Earth. These lines of explosions would probably be enough to alter its path, given you used enough power compared to the size of the asteroid in question.

Controlled collisions: When an asteroid nears the Earth, it is possible that we could use a current satellite, space craft, or specifically designed piece object  to collide with the incoming body. This is one of the most favored options when it comes to tackling an asteroid, and the ESA already has a mission in motion, just to test things out.

Attached rockets: Probably the least effective proposal of all is to try and attach some sort of propulsion device to drive the speeding object out the way of Earth; this is because of the many different complications it comes with. First, the asteroid will be travelling at a very high velocity, and so matching the object and executing a soft landing at such a speed would require precision timing and exact calculations (which would require having a lot of information, data mining that we may not have time for). Secondly, asteroids spin just like planets and stars, and so it will be incredibly difficult to direct a force in any one direction.

Mass drivers: A mass driver is a machine that would work on the asteroid to slowly remove material, and eject it into space. This would hopefully work to very slowly provide enough force to change its course. However, some have said that this idea might be more effective if used on the moon. Here a mass driver could use the ‘unlimited’ supply of material as ‘rock bullets’ to redirect an asteroid.

Ion beams: A small spacecraft could work nearby the asteroid, firing a continuous beam of ions at the asteroid. The effect would be very small, and so would need a long time in advance to work. The advantage of this is that spacecraft need not be large and heavy.

Solar energy: This would work is a very similar way to the ion beam, a station of mirrors and lens would be placed closer to the sun. This would then be able to focus the light onto the asteroid in an attempt to create a large enough force from vaporization of material (and the very tiny push of light). Similarly again to that of the above, it would need a long time to work, but wouldn't need to be too large or heavy.

Gravitational power: The method I find most intriguing for deflecting an asteroid is the use of a gravity agent. A very large, heavy, and dense craft could be put into a close proximity to the asteroid. Then the very small pull between the bodies would hopefully slowly move the asteroid off course, and into a safer zone. This would literally take years to work, and the construction of such a device would also take some time.

This is a really interesting topic to ponder, and I’m sure that as we develop more and more options will come about for us to intercept these deadly cosmic balls of rock. If the human race survives long enough, it is almost inevitable that we will one day have to face a large asteroid. Then will be a real test for us all, to whether we can unite under a common interest and preserve our species. I will leave you with a rather positive quotation...

U.S. Representative George E. Brown, Jr. - "If some day in the future we discover well in advance that an asteroid that is big enough to cause a mass extinction is going to hit the Earth, and then we alter the course of that asteroid so that it does not hit us, it will be one of the most important accomplishments in all of human history."