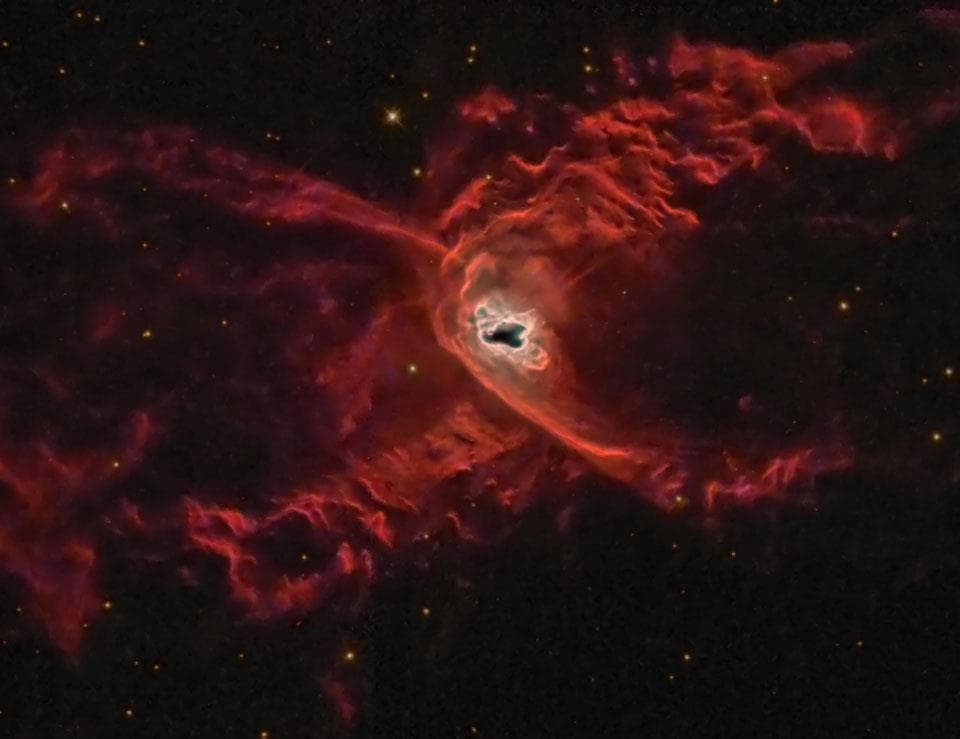 Most nebulae are truly lovely, containing an array of colors that are laid out so beautifully, they more closely resemble a painting than a scene of utter death and destruction. Granted, they generally signify rebirth (long down the road, that is), and they look like places of great creation; Occasionally, we run across some that are truly haunting. So, in the spirit of Halloween, we thought we'd take the opportunity to dredge up some of our favorite scary nebulae.

This, of course, is the Witch Head Nebula. Obviously, it's named as such because of its resemblance to the face of an evil witch—warts, hat and all—one might expect to see in a fairy-tale or a movie.

Instead, IC 2118 (its official name) is a large nebula found about 900 light-years away, near the super-giant Rigel in the Orion constellation. The Witch Head has a deep blue color (as opposed to the typical green hue often associated with the Wicked Witch of the West). This color not only comes from the blue light emitted by Rigel, but it also comes from the nebula's dust, which happens to reflect blue light most efficiently (this same principle is the reason Earth's sky appears blue).

With the wispy tendrils of interstellar gas and dust, the Little Ghost Nebula (formally known as NGC 6369) is truly a haunting sight. It's located approximately 2,000 light-years from Earth in the constellation of Ophiuchus, and is a planetary nebula by classification.

Radiating from the center is a faint star that's nearing the end of its life-span, causing it to eject its outer envelope of gas into interstellar space via stellar winds. When all is said and done, all that remains of this Sun-like star will be a dense core (called a white-dwarf). The star is emitting large amounts of ultraviolet light into the surrounding gas clouds, stripping electrons from atoms—leaving behind ionized atoms.

This wispy, ghost-like nebula is called IRAS 05437+2502 (informally known as Ira's Ghost nebula). IRAS 05437+2502 occupies a region in space where stars are being born and destroyed in a continuous cycle.

This reflective nebula is comprised of a series of large clouds of interstellar gas and dust particles. Generally, emission nebulae glow due to the massively hot stars embedded in the cloud, which ionize the gas atoms located inward. In the case of reflection nebulae, they technically emit very little light at optical wavelengths (thus they can't be picked up by an unaided eye). Rather, they emit light in the infrared portion of the electromagnetic spectrum—in which internal sources of light illuminate persistent dust clouds.

Perhaps the most striking feature of Ira's Ghost nebula is the upside down v structure, which can be seen near the center. This portion of the nebula is baffling to astronomers because there is no discernible internal light source to account for the boomerang-shaped arc at the very top.

Two scenarios are at the forefront of the debate: First, the nebular clouds could have been sent barreling through space at high-speeds after encountering a supernova nearby. Gas and dust, in this scenario, could be accumulating as they travel, which would account for the whole thing expanding more quickly than usual, and it says something about the light itself. The other theory postulates that a previously undiscovered high-velocity star may be deep inside the nebula, or the star may have departed from the nebula long ago. The interactions between such a star and the nebula would create the swept-back arc pictured here. This scenario would also explain why the structure is seen on the outskirts of the nebula instead of further inward.

The exact distance to this stellar nursery is currently unknown, but it's located in the quaint constellation of Taurus, close to the central plane of the Milky Way galaxy.

This little cosmic creepy-crawler is the Red Spider planetary nebula. It can be found about 4,000 light-years away in the constellation of Sagittarius (the Archer). Nebulae like this form from the materials expelled during the last phase of stellar evolution for Sun-like stars. As they continue to spit out the remainder of their outer envelope of gas, something quite spectacular to look at (as you can see here) takes shape.

As mentioned previously, NGC 6537 (The Red Spider Planetary Nebula's formal designation) is a planetary nebula, but it's also bi-polar (two-lobed), which essentially means that it exhibits a bipolar structure, composed of materials flowing from the center of the nebula. In this instance, at the center lies two white dwarfs, where internal winds are known to blow material out into space at approximately 621 miles (1,000 kilometers) per second.

This spooky nebula, Sharpless 2-68 (or Sh2-68), resembles some sort of a space monster (a demented Pac-Man maybe? you be the judge). The "monster" is made up of quite a bit of ionized oxygen atoms (pictured in blue), while the diffuse orange emission is the result of the nebula’s journey through the disk of our galaxy. At the center (in the blue haze) is the star responsible for the nebula’s existence.

This elderly nebula is about 45,000 years old. Like the Red Spider, it is classified as a planetary nebula. Once these stars burn the remainder of hydrogen in their core for nuclear fusion, they burn helium, causing them to balloon in size. Eventually, the remainder of their mass will condense into white dwarfs—dense remnants that are similar in size to Earth, but incredibly heavy.

The gas that gives the nebula its backbone will eventually dissipate...turning this spooky guy into mere wispy tendrils.

About 18,700 years ago, a massive star exploded approximately 17,000 light-years from Earth in the constellation of Circinus. The resulting supernova blasted off the outermost layer of the star's gases and gave rise to a pulsar. The light from which didn't reach our planet until some 1,700 years ago.

Like white dwarfs, these siblings of neutron stars are incredibly small, but dense remnants. The difference being, they spit out substantially more light and radiation. This one in particular, which has been dubbed PSR B1509-58, is only about 12 miles (20 kilometers) in diameter, but it spins an incredible 7 times per second! Its rapid rotation, exceptionally strong magnetic field (which is about 15 TRILLION times stronger than Earth's), and its energetic winds of charged particles all contribute to the intricate structure of gases seen here.

Stop for just a moment and reflect on this: This tiny object [the pulsar], which is hardly perceptible from our perspective, is responsible for this amazing structure that stretches over 150 light-years in size. That's over 150 times larger than our solar system!

In what looks to be a ghostly apparition trying desperately to break free from something trying to pull it into an abyss, we come to this frightening sight:

The region is but one small part of the famous Pleiades star cluster, an area that is known to host bright stars with fantastically beautiful nebulae of all sorts of different kinds. Yet, obviously, this one stands out from the crowd.

Here, we can see the result of 100,000 years of degradation, undertaken by one single star against a small wandering cloud of gas and dust. The star in question, called Merope, can be seen in the upper left portion of the image.  Over the past hundred thousand years, the cloud has slowly inched its way toward the star—coming within 3,500 AU of it (1 AU is the distance that separates Earth from the Sun). The subsequent outflow of hot, energetic material has slowly chipped away at the cloud. Whilst the pressure of the same light has acted as a natural repellent to the dust grains that would, under normal circumstances, produce a reflection nebula. Many of the filaments of material have become stratified, with portions of them pointing toward the star itself.

So FQTQ fans, what is your favorite "scary" nebula?