6 Ancient Human Fossils that Show us What our Ancestors were Like: 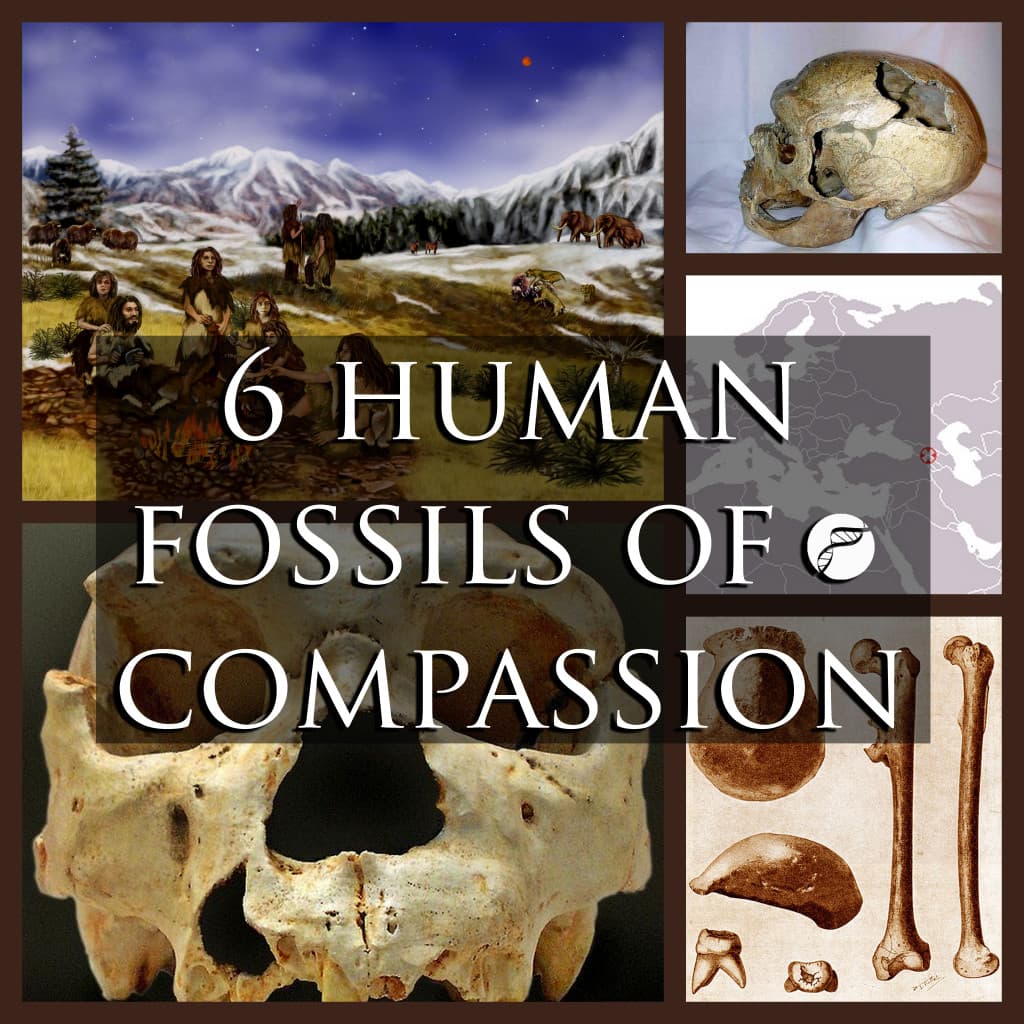 We tend to think of "cave men" as violent savages that would club women over the head to drag them back to the cave (at least, that's how they are always depicted in cartoons).  Truthfully, we do have a rather violent past; however, there's more to the story than just that.  Much more.  Our ancestors loved.  They  Cared. They felt empathy. At times, they were compassionate.

In fact, they were very much like us.  And we have the fossil evidence to show it.

Their choices and actions passed down certain genes (and maybe even ideas) to us.  So when we learn about their morality, it teaches us something about ourselves. Below, I will outline a few fossils that tell us something about the cooperation and compassion seen in human fossil remains.

Where: Dmanisi, Georgia
Who: Homo erectus
When: 1.75 million years before present
What: elderly toothless skull
Importance: This human lived many years without teeth. In modern times, this might not seem like such a huge issue, as we have a number of alternative foods that we can eat. However, in ancient times, this could mean death. In addition to the lack of teeth, this individual appears to have been extremely decrepit.  Yet, it is obvious that he was being cared for, and might even have had his food pre-chewed for him.

Where: Java, Indonesia
Who: Homo erectus
When: 800,000 years before present
What: severely broken femur
Importance: What happens to an animal if it breaks its leg?  If it lives in the wild, it dies (especially if it is a predatory animal that needs to track down its prey). Even if it is not a predator, it will generally lie there and slowly die of thirst or starvation.  However, what happens if this animal is part of a pack--a pack that assists and cares for its members? Well, then this creature may have a fighting chance. Fortunately, this human was part of one such group. In fact, this human was cared for, fed, and carried for at least several months.

Where: Atapuerca, Spain
Who: Homo heidelbergensis
When: 530,000 years before present
What: deformed skull of child estimated at 8-12 years old
Importance: A lot of the time, if an animal is deformed, it will be separated from the rest of its kind. It may be abandoned by its parents and left for dead. Unfortunately, this practice is still observed by humans in several countries around the globe. However, this fossil makes it clear that, at least some of the time, differences were accepted.  This deformed child was cared for for close to a decade before he passed on.

Where: Atapuerca, northern Spain
Who: Homo heidelbergensis
When: 500,000 years before present
What: hobbled spine.
Importance: As a result of this hobbled spine, it seems that this individual could barely walk. Undoubtedly, he couldn't hunt, and it would have been difficult for him to truly be a productive member of the group. Nevertheless, this individual was cared for and supported for years.

Where: Shanidar, Iraq
Who: Homo neanderthalensis
When: 80-60,000 years before present
What: Crushed left orbit blinding that eye. Withered and long since healed right arm (most likely causing some paralysis). Deformed right lower leg and foot.  Despite these difficulties the individual survived until the ripe old age of roughly 40 (which doesn't seem like much, but this is exceptionally old for a Neanderthal).
Importance: The description essentially says it all. This individual couldn't see well, couldn't handle objects well, could barely walk, and yet he survived for many, many years with (most likely) the assistance of a empathetic community.

Where: in a pit inside a cave at La Chapelle-aux-Saints, France
Who: Homo neanderthalensis
When: 50,000 years before present
What: Two children and an adult were found within a pit within a cave surrounded by animals bones.  The animal bones surrounding their body were unscavenged and appear to be placed in some ceremonial arrangement.
Importance: This is hardly the first Neanderthal to be thought to be buried. It's only one of the most studied.  Other Homo heidelbergensis from 400,000 years also may have buried their dead.  This kind of behavior suggests that they wanted to honor their dead, perhaps even for religious reasons.

So even though history may be full of violence and death, I am nonetheless proud to be related to these ancient humans.

If you found this post interesting, check out its prequel about the evolution of cooperation.