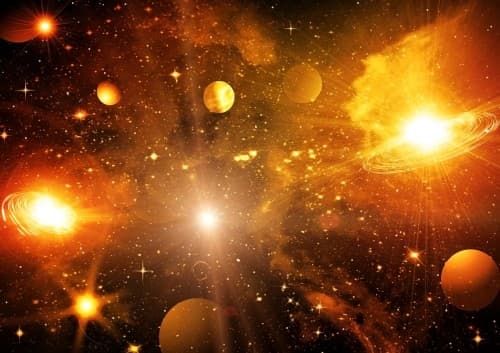 The thought of alien worlds conjures up images from popular science fiction—the desert world of Tatooine from Star Wars, the surreal forests of Pandora from Avatar—but exoplanets aren’t sci-fi anymore. As scientists discover and classify new planets, one cannot help but wonder, what are these distant worlds really like?

As it turns out, even the most imaginative book or film does little justice to real exoplanets; From planets with diamond cores, to worlds that hang between extremes, the beauty and diversity of exoplanets is both humbling and remarkable. The planets listed below are probably just the tip of the iceberg..

Carbon planets are composed almost entirely of carbon compounds, rather than the silicate-rich rocky planets in our solar system. Scientists believe their chemistry could create some very bizarre surface features, including lakes and oceans of tar or other hydrocarbons—not unlike the hydrocarbon lakes of Titan. Some could even have graphite crusts several kilometers thick.

Similarly, some carbon planets may have mantles or cores of solid diamond. While it sounds unbelievable, remember: diamonds are really just carbon compounds that form under extreme heat and pressures (like deep within Earth), so it’s actually logical that a carbon-rich planet could have a layer of diamond hiding deep under its surface.

Yes, we think so! The planet 55 Cancri E is likely a carbon planet, and WASP-12b may be as well.

Not as we know it. Carbon planets probably lack substantial water, making Earth-like life impossible. It’s conceivable that alien organisms could evolve without water altogether though, but scientists aren’t sure how their biology or metabolic processes would work.

But here’s a fun thought experiment on the diamond front: Since diamonds would be abundant on these planets, they’d probably be worth about as much as a pile of rocks on Earth. Intelligent aliens—if they somehow managed to evolve on a diamond-rich carbon planet—could potentially use diamonds in the same way humans once used stone tools; One could even imagine an alien “diamond age” akin to the human “stone age.”   Pretty wild, right?

As the name suggests, the surfaces of water worlds are completely covered, some possibly hundreds or thousands of miles deep, with water in liquid form. If conditions are right, the extreme pressure near the bottom of these oceans could squeeze liquid water into ice—even at temperatures above freezing.

Conversely, some with planet-wide seas could completely freeze over, and become planetary “snowballs.” Interestingly, scientists believe Earth may have experienced something similar around 700 million years ago. This catastrophic period—aptly called “Snowball Earth”—may have caused glaciers to extend to the equator, completely covering our planet’s surface in ice.

NASA has found several water world candidates, including Kepler-62e and Kepler-62f. Both planets are in their respective Goldilocks zones—the area around a star that is conducive for liquid water to thrive—and computer models suggest that both are mostly or completely covered in water.

Kepler-62f could wind up being an ice planet if it lacks an atmosphere that traps heat (like a greenhouse effect). It may even resemble Jupiter’s moon Europa, which is also covered in ice, but likely hides a massive subsurface ocean.

Yes, absolutely! Scientists believe some ocean planets could be teeming with aquatic life similar to the kind in Earth’s oceans.

The habitability of ice-covered planets is less clear, but NASA is so confident that they could, they plan to send a probe to Europa to search for signs of life beneath its thick layers of ice. It's believed sub-glacial oceans may even stay warm through tidal or geologic activity, making some hospitable to microbial organisms, perhaps even complex life

A Chthonian planet (pronounced “kuh-tho-nee-an”) is the remnant of a hot-Jupiter exoplanet that has had its atmosphere stripped away through stellar winds—which are intense considering the close proximity of the planet to its parent star—leaving only a rocky core behind.

Interestingly, the name “chthonian” in this context comes from the Greek word “khthonios,” referring to Greek mythological spirits of the underworld. It’s certainly a fitting name, given the fact that surface temperatures on these planets can rise to a hellish 4000 F (2200 C).

We think so! The planet CoRoT-7b is believed to be a chthonian planet. Another, dubbed HD 209458b, is currently losing mass and will likely become one in the future.

No way.  Their surfaces can get hot enough to vaporize lead.

Eccentric planets have highly elliptical orbits similar to that of comets. They periodically pass very close to their parent star, only to drift far away before looping back for another close pass. This ongoing cycle causes eccentric planets to have dramatic changes in seasons. Temperatures can vary from as cold as Pluto, to as hot as the surface of its parent star—all within a single "year."

Eccentric planets are actually fairly common. Many have orbits as elliptical as the orbits of some comets in our solar system. Some, like HD 80606 b, are more eccentric.

Possibly, but lifeforms would have to be incredibly resilient and adaptable for long term survival. Say one eccentric planet goes through a mild period, followed by long, extreme winters, evolution could eventually see organisms arise with the ability to slow their metabolisms or hibernate during colder periods.  If its surface periodically gets super-hot, life might be able to survive deep underground.

(a.k.a. “Free-Floating” or “Interstellar” Planets)

Rogue planets are lone wanderers that float freely through space, unbound to any star. Despite being nearly undetectable by modern telescopes, scientists believe rogue planets outnumber stars in the Milky Way by a factor of at least 2 to 1 (upper estimates place that number at 100,000 to 1).

As of now, scientists aren’t even sure how rogue planets form, though some were likely ejected from planetary systems long ago.

Yes, we have! PSO J318.5-22, a planet about 6 heavier than  Jupiter, is believed to be one.  Others have either been spotted or inferred through other means.

This is a tough question. Since rogues don't orbit stars, they would be perpetually dark, with no outside source of heat or energy. Any heat would need to come from the planet itself, either from geologic activity, or through tidal forces from moons that were retained.

Without light, an alien biosphere couldn’t rely on photosynthesis. However, life could potentially utilize geologic activity for energy, much like the organisms that live around hydrothermal vents on the ocean floor.  All in all, there’s no way to know until we study a rogue planet up close (and that's unlikely).

Read This Next
Hall Effect
Test Suggests Ion Thrusters Could Power Crewed Interplanetary Missions
Shoo
Scientists Warn Giant Asteroid Is Actually Swarm, Nearly Impossible to Destroy
What Does It All Mean?
The Second Alien Probe We Detect May Be Particularly Bizarre, Scientist Says
A Sip of Opal
NASA Discovers Precious Gemstones on Mars
And He Scores
We Are Completely Puzzled by This Video of a Chinese Astronaut Playing Ping-Pong in Space
More on Off World
CHON: Legacy
Yesterday on the byte
James Webb Discovers Coldest Ice in Known Universe, Harboring Molecules Essential For Life
Is There?
Yesterday on the byte
NASA Setting Up Facility For Mars Rock Samples That Might Contain Alien Life
Stunning Centaur
Jan 28 on the byte
James Webb Spots Asteroid With Its Own Saturn-Like Rings
READ MORE STORIES ABOUT / Off World
Keep up.
Subscribe to our daily newsletter to keep in touch with the subjects shaping our future.
+Social+Newsletter
TopicsAbout UsContact Us
Copyright ©, Camden Media Inc All Rights Reserved. See our User Agreement, Privacy Policy and Data Use Policy. The material on this site may not be reproduced, distributed, transmitted, cached or otherwise used, except with prior written permission of Futurism. Articles may contain affiliate links which enable us to share in the revenue of any purchases made.
Fonts by Typekit and Monotype.