Meet the 7 Alien Planets Most Likely to Have Life 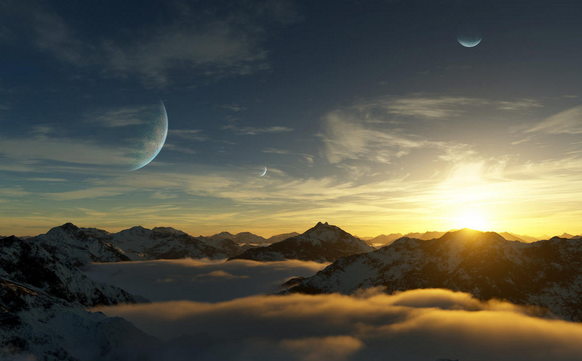 Our universe is a terribly large place. It extends some 92 to 93 billion light-years end to end. And the kicker? This is just the observable universe. Ultimately, there is a grand portion of the cosmos that we can't see. The universe is so young that light from this distant  region of space hasn't had time to reach us yet, and because the universe is expanding at faster than the speed of light, we will never be able to see (or reach) this portion of the universe.

But what we can see of the cosmos is rather populated.

Conservative estimates assert that the observable universe may contain as many as 5,300,000,000,000 habitable worlds—that's 5.3 trillion planets that might contain life. Of course, not all of these necessarily have the ability to contain life "as we know it," but they may harbor life "as we don't know it."

Generally speaking, in order to be considered a candidate for Earth-like life, the planet must be in the habitable zone of its star, terrestrial (i.e., not a gas giant), and within the acceptable size for life to form (generally, 0.5-2 times the mass of the Earth). As a refresher, the habitable zone is the area surrounding a planet where liquid water can theoretically exist. That said, there are a number of worlds that may contain extremeophiles and other forms of exotic organisms.

The below sums up some worlds that we've discovered that, scientists believe, may contain alien life and which we could inhabit.

One of the most likely candidates for life as we know it is Kepler 186f. In fact, this is a planet that (if we could get there) we might be able to colonize with relative ease. Sadly, the world is  490 light-years away, so it would take us hundreds of thousands of years to reach (even using very liberal and generous estimates). The planet was discovered back in April of 2014, just about a year ago. This falls well into the category of  potentially Earth-like planets, as it is within the habitable zone of its star, is terrestrial, and is just 10% larger than Earth.

Ultimately, Kepler 186f is just the outermost of the 5 known planets in the Kepler-186 system. Kepler 186 is a red dwarf star, which means that it is considerably smaller and dimmer than our own sun (more than 70% of the Milky Way's 100 billion or so stars are red dwarfs).

The Planetary Habitability Laboratory  created an excellent comparison of a Caribbean sunset as it appears on Earth and how a similar spot might look if it were on Kepler-186f at dusk (note the similarity in the size of the stars. This is because, despite the fact that Kepler 186 is considerably smaller, the planet is closer).

Kepler 283c was discovered along with a host of other worlds as part of an enormous data dump from the Kepler Space Telescope. This data contained a staggering 700 newly confirmed exoplanets (keep in mind, just 20 years ago, we didn't know of any planets in other solar systems, so 700 in one go is quite staggering).

However, this world is on the border of being able to support Earth-like life. It is about twice the size of Earth and orbits much closer to its home star, which is over 1,700 light years from Earth. But again, due to the decreased size in the star, it is still well within the bounds of Kepler 283's habitable zone.

Personally, if we were going to try and make our way to any planet that might be habitable, I think I would make an argument for either Gliese 667C f or Gliese 667C e. That's because these woulds would offer an amazing view. Whe? They have three suns. Because this is a triple star system, these are two of the strangest potentially habitable worlds that we've ever discovered. Like the other worlds covered, both planets fall inside their star(s) habitable zone, and at just 22.1 light-years away, it would still take some time to get there, but the travel would be a (tiny) bit more manageable.

As their names suggest, these Kepler-62 planets are some other worlds that were discovered by NASA's Kepler Space Telescope. These planets would give us a little more room to work with, as 62e is about 1.6 times more massive than Earth and 62f is just about 1.4 times as massive. These worlds are quite out there (at least as far as our ability to travel goes). They wander though space about 1,200 light-years from Earth in the constellation Lyra.

And if you were born on 62e, you would be quite a bit older than you are now. It completes one lap around its parent  star, which is a red dwarf, every 122 days. 67f has an orbit of some 267 Earth-days. Researchers think that both 62e and 62f, are "water worlds" — warm places mostly or completely covered by liquid water. So they would also be absolutely awesome to visit (imagine how big the whales may be here), but living there long term might be a bit difficult.

Gliese 581d is another one of our galactic neighbors (in the grand scheme of things, it is basically just around the corner). This world is just 20 light-years away (the closest planet covered on this list). However, despite its close proximity and its location in its star's habitable zone (alas) the planet might have a thick carbon dioxide atmosphere. This would make it rather inhospitable, as we need to breath oxygen (obviously).

However, scientists also believe it could be rocky with liquid water. So although it might not be too grand for us, scientists think that it could harbor stunning rainforests.

But even if it does have oxygen, humans would find it a little difficult to thrive there, as it is some seven times more massive than Earth and about twice its size. Still, since it is essentially in Earth's backyard, we might want to make a go at it anyways (if we ever get the tech to utilize interstellar travel).

Read This Next
Lonely Planet
Scientists Find Nearby Planet the Same Size of Earth, Plan to Search It for Life
Hall Effect
Test Suggests Ion Thrusters Could Power Crewed Interplanetary Missions
Shoo
Scientists Warn Giant Asteroid Is Actually Swarm, Nearly Impossible to Destroy
What Does It All Mean?
The Second Alien Probe We Detect May Be Particularly Bizarre, Scientist Says
A Sip of Opal
NASA Discovers Precious Gemstones on Mars
More on Off World
Infra-Red Alert
Yesterday on the byte
James Webb Reveals Mysteriously Powerful "Engine" of Two Merging Galaxies
Die to Fight Anot...
Yesterday on the byte
Mysterious Russian Satellite Explodes
Heavy Metal
Tuesday on the byte
NASA Mars Rover Finds Metallic Object That Smashed Down on Surface
READ MORE STORIES ABOUT / Off World
Keep up.
Subscribe to our daily newsletter to keep in touch with the subjects shaping our future.
+Social+Newsletter
TopicsAbout UsContact Us
Copyright ©, Camden Media Inc All Rights Reserved. See our User Agreement, Privacy Policy and Data Use Policy. The material on this site may not be reproduced, distributed, transmitted, cached or otherwise used, except with prior written permission of Futurism. Articles may contain affiliate links which enable us to share in the revenue of any purchases made.
Fonts by Typekit and Monotype.