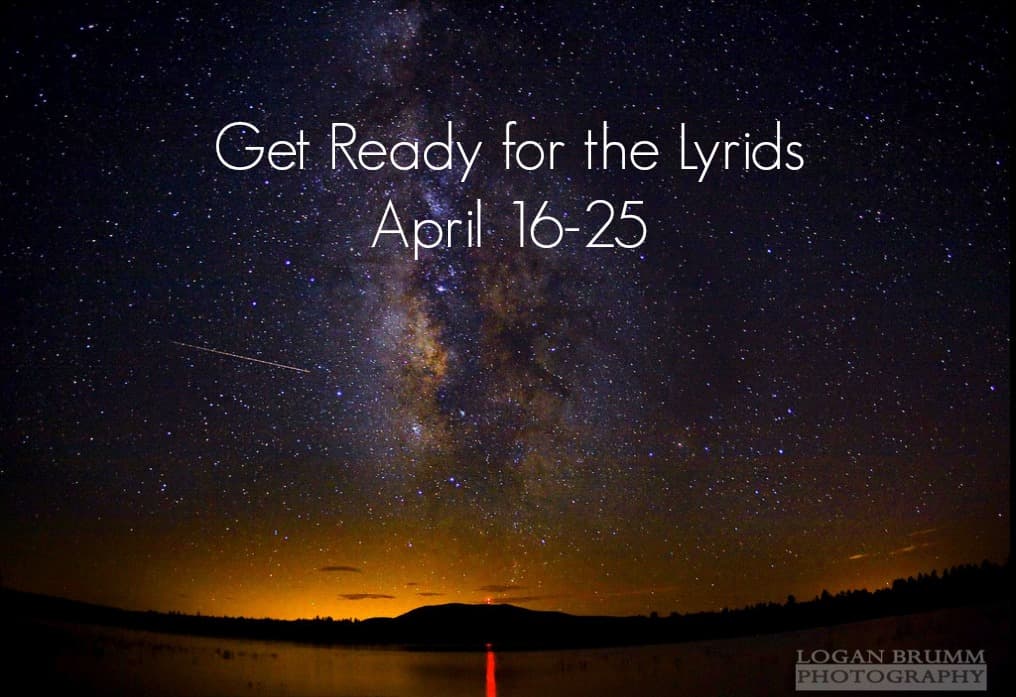 Meteors are created when tiny fragments of interplanetary material, known as meteoroids – which are usually debris from a comet and are spread out along the orbit of that comet – enter the Earth's atmosphere and are heated to incandescence. Generally this occurs at an altitude of 47-62 miles (75-100 kilometers). This process vaporizes the vast majority of meteoroids, and only the largest survive to reach the Earth’s surface. The fragments that actually reach Earth are called meteorites. A meteor shower occurs when the Earth passes through a swarm of meteoroids.

Here are five key facts about the Lyrids in particular and meteor showers in general.

1. The Lyrids aren’t the brightest or the speediest, but they’re the oldest known meteor shower.

That said, they’re still pretty bright, producing luminous trains of dust that can be observed for several seconds. The radiant point of the shower – the point in the sky from which the meteors seem to emerge – lies near Vega, a star in the constellation Lyra (from which the Lyrids get their name). Vega is one of the brightest stars in the sky during this time of year. The Lyrid meteors disintegrate after hitting our atmosphere at a moderate speed of 29.8 miles per second.

The Lyrids are generally considered to be the oldest known meteor shower; the earliest account of the shower comes from Chinese astronomers in 687 BC, who wrote of stars dropping down like rain at midnight. The Lyrids are associated with the comet Thatcher, which takes about 415 years to orbit around the sun.

2. Meteors always there, but sometimes they’re harder to see.

Meteors are actually visible every night of the year, but some nights are much better than others for meteor gazing. The best shows are on moonless nights, during one of the many meteor showers that take place throughout the year. Speaking of which, a waning gibbous Moon (http://fullmoonphases.com/waning-gibbous-moon) will make it more difficult for many observers to see the Lyrids shower this year. But you can minimize those difficulties – and that brings us to the next point.

3. Where, how, and when you view are important.

The Lyrids are best viewed in the Northern Hemisphere. You don’t need a telescope if you’re viewing the shower during its peak; you should be able to see plenty with your naked eye. Nor do you have to look in any particular direction in order to see the show; just lie down on the ground looking eastward, and gaze up at the sky.

But you do have to be patient, so make sure you dress comfortably and take a blanket and/or whatever else you need to make the wait more comfortable. As for that big bright Moon that’s expected that night, you can make viewing a little easier if you try to hide the Moon from your view using trees or a building. At least try to keep the light of the Moon from entering your eye directly. Of course light pollution can also limit your viewing, so try to get somewhere out of the big city to see the show. The best time to see the Lyrids is after nightfall and before dawn. You’ll probably see the most meteors by watching after local midnight; the Earth heads into the meteor stream after midnight, so the meteors are more frequent and faster.

4. You’re not really in danger of being struck.

Just in case you were worrying about being bopped on the head by a rock from the heavens, we’ll put your mind at ease: it’s not very likely to happen. Since three-fourths of our planet is covered with water, the probability of a meteor landing on water is much greater than their landing on Earth, and particularly on you. While it’s true that meteorites have struck two or three folks in recent history (such reports are difficult to confirm), and damage to personal property from meteorite impact has been recorded, you and your house are probably quite safe.

5. Meteor showers are like buses; if you miss one, another will be along soon.

So you fell asleep before the Lyrids peaked, or that big bright Moon spoiled the show for you? Not to worry. There are plenty of other meteor showers throughout the calendar year. The lineup for 2014 includes but is not limited to:

For more details about those showers (and the respective Moon phases), see the Amateur Astronomical Society of Rhode Island.

By the way, don’t confuse a meteor shower with a meteor storm. A meteor storm is actually a very rare, once-in-a-lifetime event when the whole sky is filled with meteors. Meteor showers are much subtler, and the non-observant generally won’t notice the difference between a meteor shower night and any other night. For the observant, however, there are rich rewards.

Enjoy the show(s)! And if you have a cloudy sky, you can watch them live here, starting at 5:00 PT
https://www.youtube.com/watch?v=akSdvKvW8DM

This is a guest post by Sarah Brooks from best people search. She is a Houston based freelance writer and blogger. Questions and comments can be sent to brooks.sarah23 @ gmail.com.