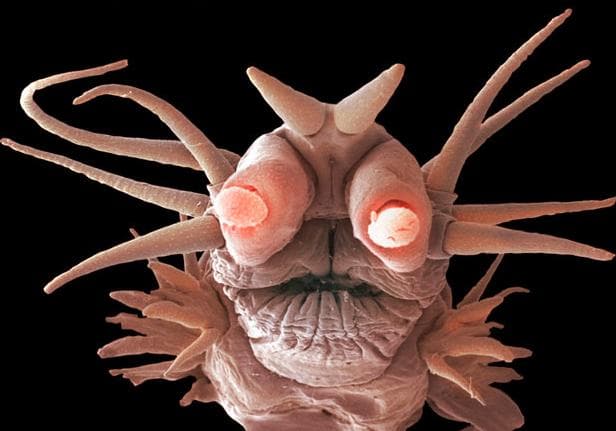 These creatures may look like terrifying beasts, but there isn't too much to fear. Mostly, this is because these images are of  polychaetes, or bristle worms. There are over 10,000 species of polychaetes living in Earth's oceans, making them the among the most common marine organisms. Like most worms,  polychaetes are rather small, so you've no reasons to fear these (tiny) monsters. But don't let their small size fool you, these creatures are pretty tough. Ultimately, they are able to survive in some of the harshest environments on Earth, like areas of the ocean with bone-crunching sea pressures where sunlight never penetrates. What's more, they have been on this planet for about 530 million years, which is over 200 million years longer than trees.

See some amazing macro images of them below:

"As the volcanic vents are also believed to exist on Europa, the sixth closest moon of the planet Jupiter, many scientists are hoping to find connection with potential life on other planets, meaning that these alien-looking worms actually might help in discovery of real-life extraterrestrial creatures.

Due to the complete lack of sunlight, the entire surrounding of these thermal vents produces energy from chemistry rather than photosynthesis, meaning that Polychaetes are hosts to symbiotic bacteria that provides them with nutrients."