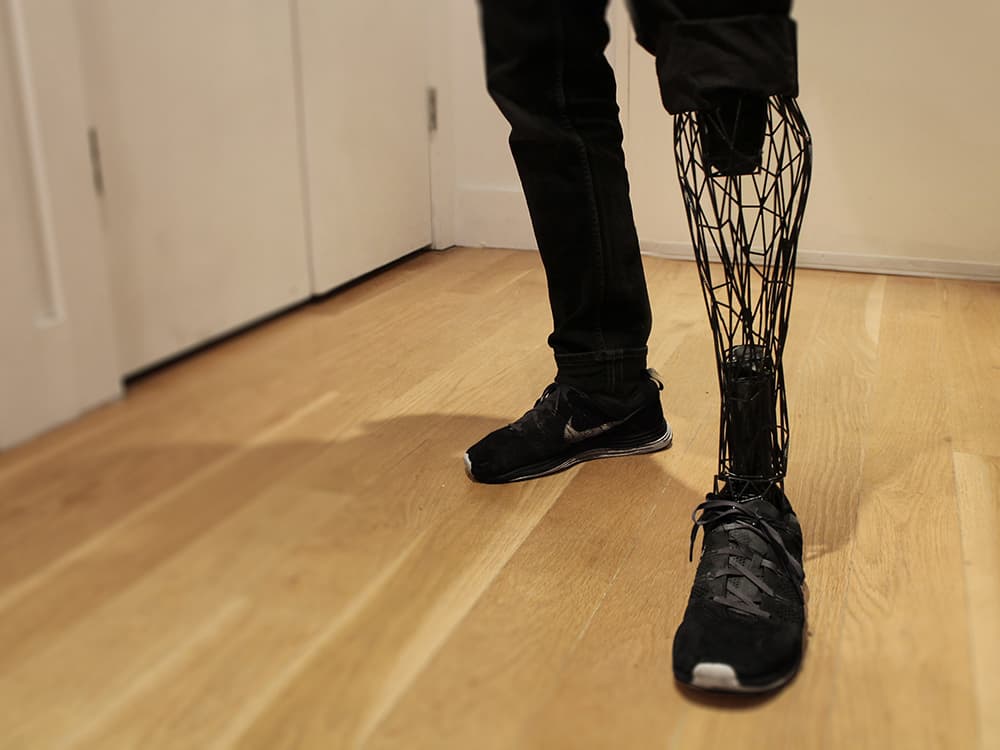 William Root, a recent graduate from the Pratt Institute in New York City, has come up with an amazing way of using 3-D printing technology. He developed a system to 3D print super-lightweight prosthetic legs that aren't about hiding difference. Instead, they focus on, well, making you look totally bad ass. Of course he is not the first to use this technology to make prosthetic limbs. However, his take on this is entirely refreshing.

Root notes that prosthetic limbs are often things that we are afraid to look at. They are hidden. They are a sign of shame and disfigurement. However, Root hopes to make them an accepted part of life. "Prosthetic limbs are stigmatized because they are so inhuman; most aftermarket companies that try to address this problem attempt to create a realistic-looking leg, which crosses into the uncanny valley," Root asserts. The "uncanny" nature of the limbs is, Root argues, what makes them a problem. They are trying to be something that they are not.

Of course, there is nothing overtly wrong with these limbs as they currently are; it's just our perception of difference and otherness that is flawed. But perceptions are not so easy to change. We cannot simply will ourselves to see things the way that we'd like to, and sadly, people who are in need of prosthesis don't have a choice about how they are seen.

That is precisely the issue: Choice. Currently, there is none. Or at least, for those who need a limb, there is next to none. Even where there are choices, they are often prohibitively expensive.

This lack of choice leaves individuals in need of prosthesis with only one way to go. This can contribute to feelings of disempowerment.  But as soon as you give people choice, things change. Thus, Root argues for a world where people who need prostheses can choose their limbs in the same way that one chooses their hair cut. “With prostheses you are essentially designing a person, their body already dictates the form. Each leg needs to be as unique as its owner.”

And as was mentioned, while the generic nature of many prosthetic limbs is a problem because of the "otherness" that is associated with them, there is also a significant issue with the price tag. Many run tens of thousands of dollars. Yet, Root's 3-D printed elements only cost 1,800$. True, that is still a lot of money, but it is much closer to what the average individual can afford.

Unfortunately, the knee and ankle joints used in his design are specialized components and are, thus, rather expensive. However, Root is hopeful that he may be able to tweak the design so that it can be used without these specialized components. And he adds that, as this kind of printing becomes more and more common place, designs like this will get cheaper and cheaper: “With the Exo, the cost of the limb would be reduced almost to just the cost of printing it,” says Root. “As 3-D printing technology advances and becomes more mainstream those costs have nowhere to go but down.”

A nice sum from the guys as Gizmag:

Although 3D printing is revolutionizing prosthesis manufacturing, enabling fast, accessible, low cost production, aesthetics is lagging behind. The Exo-Prosthetic leg could be an alternative to the traditional "robotic" prosthesis, using 3D scanning, modeling and printing technology to create a customizable titanium exoskeleton that replicates the exact form of the amputated limb.