10 Interesting and Important Facts About Ebola 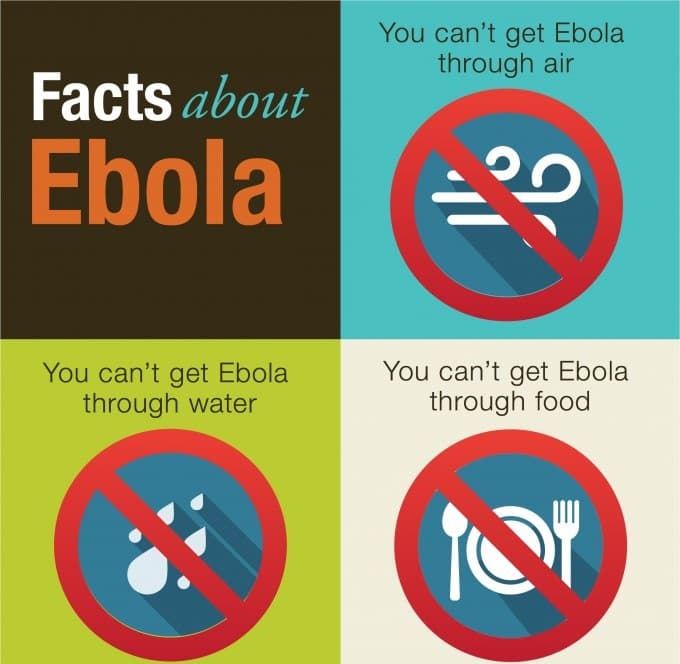 Unfortunately, the 2014 Ebola outbreak has a lot of people worried. The fear has recently heightened, as two American aid workers were evacuated from Liberia to Emory University hospital (located in Atlanta, Georgia), where they are currently being treated for Ebola. But as is true of most things, the fear is a little misplaced. Here are the main things that you need to know about Ebola:

1) Death is Not Absolutely Certain:

Ebola is not necessarily a death sentence (of course, it is not a walk in the park either). Maimuna Majumder, a biostatistician and epidemiologist at the Massachusetts Institute of Technology, notes that, "The cumulative average considering all Ebola cases and deaths from 1976 to the present is actually closer to 60-to-65% and the current outbreak has a CFR of about 54% - though it's subject to change as the outbreak goes on." Yet, we must note that the figure of 54% is an average taken from several countries. The fatality rate varies from one country to another - in Guinea it's about 73%, whereas in Liberia its 55%, in Sierra Leone it's 41% and in Nigeria it's 11%.

The numbers vary for a variety of reasons, but more on that later. Suffices to say, you can get Ebola and live to tell about it (if you are lucky).

2) It's Only Spread Through Bodily Fluids:

Although we may look at a person who is infected with Ebola like some modern day Typhoid Mary, it is (for all intents and purposes) not very easy to spread Ebola. Contrary to popular belief, you don't get Ebola just by looking at an infected person. The virus is not spread through the air, but through bodily secretions (like blood or urine). ,Do you plan on touching an infected person's blood or urine?

No? Then you have little to worry about.

Yes? Then seriously reevaluate your schedule and your life choices.

Since we know that Ebola is spread through bodily fluids, doctors, medical personnel, and those caring for the infected need to have head-to-toe protective gear. In most nations where the disease quickly spreads, they do not have access to these protective measures or advanced knowledge about quarantine procedures. As a result, the highest infection rate is found in doctors and nurses, and these may often spread the disease to other patients. In short, tf you have advanced medical expertise, then you are better able to prevent the spread of infection (and thus, the death toll).

4) Quarantine and Travel Restrictions Are Important:

Worried about a traveler unknowingly bringing Ebola into an uninfected nation? Don't. The United States, and many other nations, have issued a Level 3 Warning for all affected nations.  There are very strict screening processes for all travelers who live in, or visit, nations with Ebola. Of course, this fact does not help those who are infected, but it is comforting to know that we can protect at least some from the illness.

5) There is No Cure And No Real Treatment:

Unfortunately, there isn't really any way to treat Ebola. The only real recourse that we have is to offer support for infected individuals and make them as comfortable as possible. However, somethings that medical practitioners do can ultimately save lives. For example, intravenous fluids can prevent dehydration. Other than that, all we can really do (especially in places lacking modern medicine) is keep the patient cool to help with the fever and maybe offer pain relievers.

6) But New Drugs Are On The Horizon:

We don't have a way to beat Ebola...yet. However, in an article published  in Nature, researchers that were working  in Fort Detrick in Maryland announced that they may have found a potential cure. The scientists have discovered a molecule that can be used to stop the virus (and other viruses in the same family) in its tracks. This molecule is so effective because it looks a lot like the “A” that makes up DNA: adenosine. The molecule is called ” BCX4430,” and since it looks so much like Adenosine, viruses like Ebola can accidentally use it as a building block when trying to grow inside our cells. Ultimately, this is fantastic news for us (not so fantastic for the virus) as the use of this molecule blocks the virus’ growth and reproduction (effectively stopping the virus).

7) Ebola Has Only Been Around For About 40 Years:

Ebola has made quite a name for itself in a short amount of time. According to the World Health Organization (WHO), the virus first appeared in 1976 in 2 simultaneous outbreaks in the Sudan and in the Democratic Republic of Congo. Genus Ebolavirus is 1 of 3 members of the Filoviridae family (which also contains the Marburg virus). The Ebola virus also comes in (sadly) 5 different species.

8) The Symptoms Are Awful:

When you contract Ebola, the first symptoms are fever, intense weakness, muscle pain, headache and sore throat (generally, flu-like symptoms). This is followed by even worse symptoms, like vomiting, diarrhea, rash, and impaired kidney and liver function. Then (of course) there comes the internal and(slightly more traumatizing) external bleeding. In most cases, but not all, death follows shortly thereafter.

9) It Didn't Start With Monkeys:

The common thought is that Ebola started from someone eating monkey brains. However, Ebola can be traced further than that. In Africa, fruit bats (specifically, the species of the genera Hypsignathus monstrosus, Epomops franqueti and Myonycteris torquata) are believed to be the natural hosts for Ebola virus. Scientists think that the bats carry the virus in their intestinal tracts. That said, non-human primates have been proved to be a source of infection for humans, but of course, they are just an accidental host (like human beings). Pigs and dogs have also been known to carry the disease.

As previously noted, one of the first outbreaks was in Democratic Republic of Congo. This outbreak was situated in a village that was close to the Ebola River (and the price of property there is probably terrible now).

Most information in this article comes from the WHO and CDC.