10 Amazing Facts You Should Really Know About Black Holes 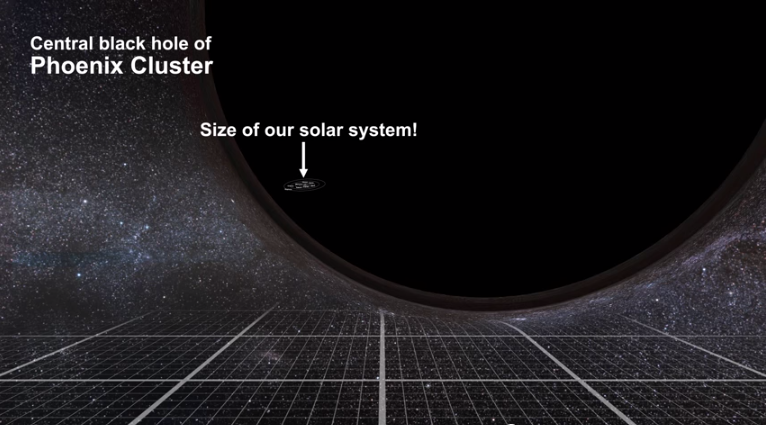 Imagine matter packed so densely that nothing can escape. Not a moon, not a planet and not even light. That’s what black holes are — a spot where gravity’s pull is huge, ending up being dangerous for anything that accidentally strays by.

But how did black holes come to be, and why are they important? Below we have 10 facts about black holes — just a few tidbits about these fascinating objects.

Because a black hole is indeed “black” — no light can escape from it — it’s impossible for us to sense the hole directly through our instruments, no matter what kind of electromagnetic radiation you use (light, X-rays, whatever.) The key is to look at the hole’s effects on the nearby environment, points out NASA. Say a star happens to get too close to the black hole, for example. The black hole naturally pulls on the star and rips it to shreds. When the matter from the star begins to bleed toward the black hole, it gets faster, gets hotter and glows brightly in X-rays.

Fact 2: Look out! Our Milky Way likely has a black hole.

A natural next question is given how dangerous a black hole is, is Earth in any imminent danger of getting swallowed? The answer is no, astronomers say, although there is probably a huge supermassive black hole lurking in the middle of our galaxy. Luckily, we’re nowhere near this monster — we are about two-thirds of the way out from the center, relative to the rest of our galaxy — but we can certainly observe its effects from afar. For example: the European Space Agency says it’s four million times more massive than our Sun, and that it’s surrounded by surprisingly hot gas.

Say you have a star that’s about 20 times more massive than the Sun. Our Sun is going to end its life quietly; when its nuclear fuel burns out, it’ll slowly fade into a white dwarf. That’s not the case for far more massive stars. When those monsters run out of fuel, gravity will overwhelm the natural pressure the star maintains to keep its shape stable. When the pressure from nuclear reactions collapses, according to the Space Telescope Science Institute, gravity violently overwhelms and collapses the core and other layers are flung into space. This is called a supernova. The remaining core collapses into a singularity — a spot of infinite density and almost no volume. That’s another name for a black hole.

Fact 4: Black holes come in a range of sizes.

There are at least three types of black holes, NASA says, ranging from relative squeakers to those that dominate a galaxy’s center. Primordial black holes are the smallest kinds, and range in size from one atom’s size to a mountain’s mass. Stellar black holes, the most common type, are up to 20 times more massive than our own Sun and are likely sprinkled in the dozens within the Milky Way. And then there are the gargantuan ones in the centers of galaxies, called “supermassive black holes.” They’re each more than one million times more massive than the Sun. How these beasts formed is still being examined.

This is best illustrated by one person (call them Unlucky) falling into a black hole while another person (call them Lucky) watches. From Lucky’s perspective, Unlucky’s time clock appears to be ticking slower and slower. This is in accordance with Einstein’s theory of general relativity, which (simply put) says that time is affected by how fast you go, when you’re at extreme speeds close to light. The black hole warps time and space so much that Unlucky’s time appears to be running slower. From Unlucky’s perspective, however, their clock is running normally and Lucky’s is running fast.

Fact 7: The nearest black hole is likely not 1,600 light-years away.

An erroneous measurement of V4641 Sagitarii led to a slew of news reports a few years back saying that the nearest black hole to Earth is astoundingly close, just 1,600 light-years away. Not close enough to be considered dangerous, but way closer than thought. Further research, however, shows that the black hole is likely further away than that. Looking at the rotation of its companion star, among other factors, yielded a 2014 result of more than 20,000 light years.

Fact 8: We aren’t sure if wormholes exist.

A popular science-fiction topic concerns what happens if somebody falls into a black hole. Some people believe these objects are a sort of wormhole to other parts of the Universe, making faster-than-light travel possible. But as this Smithsonian Magazine article points out, anything is possible since we still have a lot to figure out about physics. “Since we do not yet have a theory that reliably unifies general relativity with quantum mechanics, we do not know of the entire zoo of possible spacetime structures that could accommodate wormholes,” said Abi Loeb, who is with the Harvard-Smithsonian Center for Astrophysics.

Fact 9: Black holes are only dangerous if you get too close.

Like creatures behind a cage, it’s okay to observe a black hole if you stay away from its event horizon — think of it like the gravitational field of a planet. This zone is the point of no return, when you’re too close for any hope of rescue. But you can safely observe the black hole from outside of this arena. By extension, this means it’s likely impossible for a black hole to swallow up everything in the Universe (barring some sort of major revision to physics or understanding of our Cosmos, of course.)

Fact 10: Black holes are used all the time in science fiction.

There are so many films and movies using black holes, for example, that it’s impossible to list them all. Interstellar‘s journeys through the universe includes a close-up look at a black hole. Event Horizon explores the phenomenon of artificial black holes — something that is also discussed in the Star Trek universe. Black holes are also talked about in Battlestar:Galactica, Stargate: SG1 and many, many other space shows.