Would it Be Possible to Build a Death Star?

This decades-old question explores the science behind building this massive weapon of mass destruction.

Could We Actually Build One Now?

Few weapons of mass destruction are as iconic as Star Wars’ Death Star—an “armored space station with enough power to destroy an entire planet.” But like most of the coolest weapons in the realm of science fiction, they are simply figments of its creator’s imagination.

However, with Rogue One: A Star Wars Story out in cinemas this week, the question of whether it is possible to build a weapon capable of annihilating a planet in seconds has resurfaced.

According to NASA’s Brian Muirhead, who serves as chief engineer for the Jet Propulsion Laboratory, building a Death Star will require Earth to start construction on an asteroid.

“It could provide the metals. You have organic compounds, you have water—all the building blocks you would need to build your Death Star,” he said in an interview with WIRED.

Mining materials from space also means you lower the cost incurred for launching missions. “Given launch costs today, I did a simple calculation…and the cost savings might be of the order of the total economic output of today’s Earth for around a billion years (a huge and not very realistic number),” he said.

Rod Pyle, author of Blueprint for a Battlestar: Serious Scientific Explanations Behind Sci-Fi’s Greatest Inventions, agrees, and raises a pressing concern about rocket launches. If we are unable to mine materials from asteroids, we’d have to send materials from Earth. To build an armored space station the size of the moon would pollute our atmosphere to a point that Earth would be uninhabitable.

The Death Star would also be too heavy to remain in low orbit without any form of propulsion. It’s possible to push it higher, but we would need a “prohibitive” amount of rocket fuel.

The Death Star’s ability to send a single laser pulse targeting the planet it intends to destroy will also “need over a million billion times more power than Earth’s most powerful laser beam.” Right now, we only have a 2-petawatt (2 quadrillion watts) beam, explained Raychelle Burks—an Assistant Chemistry Professor from St. Edward’s University in Austin Texas.

“In producing all that energy, you would produce a lot of heat—like enough heat to melt the Death Star,” Burks said.

Could We Maybe Build One in the Future?

Star Wars first came out in the 70s. And if you asked this same question then, the answer would’ve been a hard no. Three unfortunate prequels, a reboot, an anthology, and decades of remarkable advances in technology later, the answer could very well be: not yet. 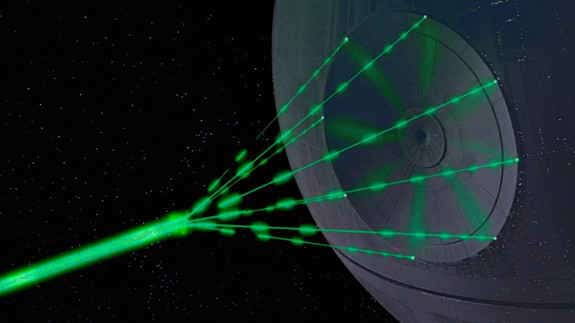 It’s not that we don’t have the technology for it, it’s mostly because we are still at the early stages of these technologies. For instance, we have the ability to launch rockets into space to deliver materials, we just have to find a way to do so more efficiently.

Brooks Peck, a curator at the EMP Museum in Seattle believes that creating enough metal to build the Death Star is also theoretically possible—but only if we already have an established space infrastructure to support it. We technically do, but it’s still in its infancy. Take asteroid mining for example, where governments are working with private companies to make it possible, hopefully by 2025.

Our continued understanding of antimatter also lends itself to the future construction of a real Death Star. “With a pure antimatter bomb, the Death Star wouldn’t have to supply all the energy needed to blow Alderaan to smithereens—only half (about 1.24 trillion tons). Alderaan would supply the rest,” Joshua Filmer wrote in a previous article for Futurism.

Of course, these breakthroughs weren’t founded on the idea of building a massive weapon. As the White House pointed out in their reply to the 34,435 strong petition for a Death Star, it just isn’t on the horizon—“The Administration does not support blowing up planets.”

Which is something we can all support.

Save the Solar System

Scientists: We Need to Protect the Solar System from Space Mining

An Antimatter Drive In Less Than a Decade? It’s Not as Far-Fetched as You Might Think