If you type "Iron Man" into YouTube, the top suggestion is a major "Avengers: Endgame" spoiler. And that's just the tip of the spoilerberg. 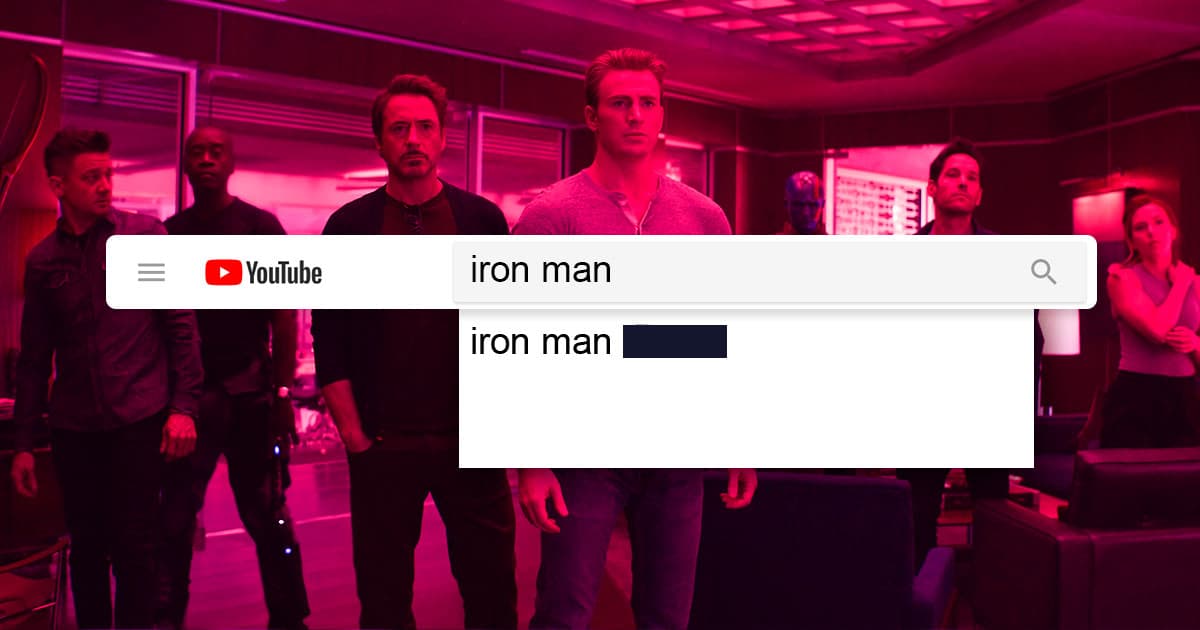 Imagine that you're about to watch the blockbuster "Avengers: Endgame" for the first time. You need a refresher on what Iron Man has been up to for the last few Marvel Cinematic Universe movies, so you head over to YouTube for an explainer.

The only problem: as soon as you type "Iron Man" into the YouTube search bar, the top autocomplete suggestion that springs up is "Iron Man dies" — a galling spoiler for anyone who hasn't seen "Endgame" yet.

That's not the only spoiler lurking in YouTube's autocomplete algorithm, either. A search for "Tony Stark," Iron Man's alter ego, also lets slip that the character dies, and typing in the names "Black Widow," "Natasha Romanoff," "Captain America," and "Steve Rogers" will also give away crucial plot details from the film.

The spoilers aren't limited to the Marvel cinematic universe, either.

Critics have periodically pointed out specific spoilers in YouTube's autocomplete, as well as the autocomplete for Google search, but the problem appears to be more widespread than previously reported: YouTube autocompletes for "Han Solo," "Anakin," "Mufasa," "Snape," and "Cersei" all give away crucial plot twists from "Star Wars," "The Lion King," "Harry Potter," and "Game of Thrones."

The phenomenon is particularly striking given YouTube's ongoing and public struggles to moderate violent, extremist, and inappropriate content on its platform. The company has come under fire for harboring white supremacists, algorithmically favoring conspiracy theories, and spreading video of a bloody mosque shooting in New Zealand.

In June, YouTube pledged to remove thousands of extremist videos — a task that critics immediately warned would be extraordinarily difficult to complete at scale.

"The platforms have become very good at issuing PR statements about proposed changes that don't ultimately have much effect," Stanford researcher Rebecca Lewis wrote of the move on Twitter. "Any change in the right direction is good, but the platforms keep making promises they don't ultimately keep."

It's hard not to see YouTube's autocomplete spoilers as an illustration of the difficulty of moderating such a vast platform. It wouldn't be impossible for YouTube to manually examine its search results for media sensations, like blockbuster films or hit TV shows, and cleanse its autocomplete of particularly egregious spoilers — but it would require a dedicated staff and an institutional commitment to the project.

And if the site can't spare the effort to keep its search bar from ruining a hit superhero movie, it's hard to imagine YouTube stamping out problematic material in the long term.

A spokesperson for Google, which bought YouTube in 2006, didn't respond to detailed questions about this story.

Read This Next
Going Wireless
Hackers Took Over a Subdomain of Wired.com for Several Months and Replaced It With Sleazy Online Casino Content
Copyright Beats
Iconic Lofi Hip Hop Girl Videos Taken Down by Copyright Strikes
"Don't Be Evil"
Google Refuses to Pull Website Responsible for Scores of Suicides
Oh, Billy
Google Debuts Dystopic 3D Prison-Style Video Chat: Project Starline
Brands We Love
Learn Big Data and Machine Learning Skills Right at Home With This Training
More on Future Society
Rough
Yesterday on futurism
Elon Musk's Twitter Is Reportedly Failing Miserably to Contain Horrific Child Abuse Content
YouTube Propaganda
Yesterday on the byte
Experts Say There's Something Very Weird About North Korean YouTubers
Bird Crap
Feb 4 on the byte
It Looks Like Elon Musk Is Actually Building a Twitter Payment Platform
READ MORE STORIES ABOUT / Future Society
Keep up.
Subscribe to our daily newsletter to keep in touch with the subjects shaping our future.
+Social+Newsletter
TopicsAbout UsContact Us
Copyright ©, Camden Media Inc All Rights Reserved. See our User Agreement, Privacy Policy and Data Use Policy. The material on this site may not be reproduced, distributed, transmitted, cached or otherwise used, except with prior written permission of Futurism. Articles may contain affiliate links which enable us to share in the revenue of any purchases made.
Fonts by Typekit and Monotype.