What is the "Oh My God" Particle? 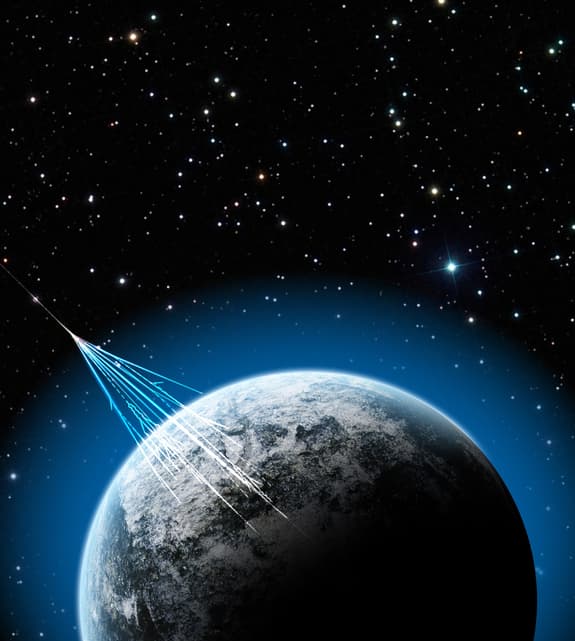 One of the most entertaining names that I've come across in the physics sector is the "Oh My God Particle." Scientists also refer to this  particle as the "ermahgerd particle" (kidding, kidding. It's not really called that, but it is called the "Oh My God Particle").  Now, the first thing that may pop into some of your minds is the Higgs Boson, which was discovered in 2012. This isn't too surprising as the media went around calling it the "God Particle." However, these two particles are very different.

So what is the Oh My God Particle? Well it is a simple, lowly proton. So why the name?

This proton had the effective mass-energy of a baseball traveling at 90 km/h (56 mph)! This type of particle is known as a cosmic ray, they're generally just protons but can sometimes be a Helium atom or even an electron. What makes them so interesting is that they're traveling very near the speed of light, and the Oh My God Particle is the fastest ever found.

Discovered back in 1991 in Utah, this very high energy particle is likely to have originated from around the Supermassive Black Hole in the galaxy Centaurus A before it made its journey to the Earth. Now we mentioned that it was traveling near the speed of light... Well how near? Well this proton had a energy level of about 50 joules of energy, which is enough to briefly light up a 50 Watt light bulb. This may not seem like much energy, but since a single proton weighs 1.67e-27 kg (or 0.167 with 26 zeroes before it), it must have had an incredible speed. And that speed has been calculated to being about 99.9999999999999999999995% of the speed of light! That means that, per a second, it was traveling only 1.5 quadrillionths of a meter slower than the speed of light.

Not to worry though, even though this particle had the mass-energy of a baseball, if you were to be hit by one of these in the head while walking down the street, you wouldn't be knocked unconscious.

I hope now you can appreciate why it is called the Oh My God Particle...the scientists that detected this particle probably yelled that out when they worked out how fast that single proton was traveling.