That's one way to stay active in space. 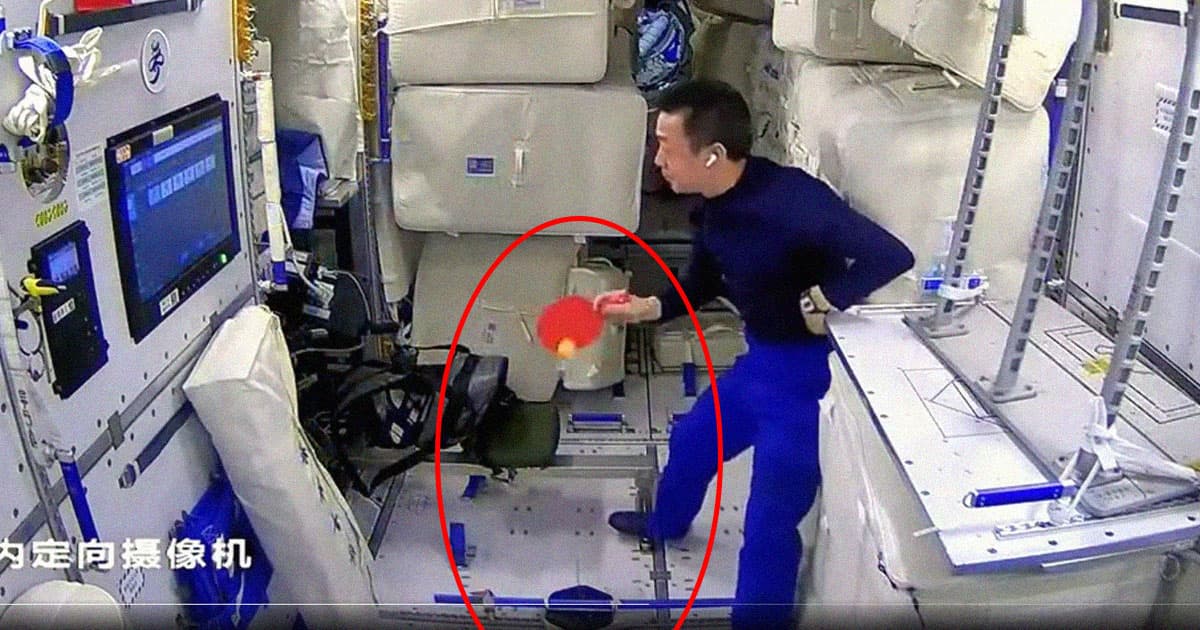 But footage shared by Chinese media of astronaut Deng Qingming whacking a ball around in the country's Tiangong is frankly very puzzling. The ball always returns to Deng's paddle, but he doesn't seem to be bouncing it off a flat surface, and it wobbles mysteriously as it moves through the air, leaving us with far more questions than answers.

How is this extraterrestrial game actually work? And whatever's going on, does it really count as playing ping-pong in space?

Here's our theory: Upon closer examination, the ball appears to be attached to some sort of long static tether, kind of like a floppy antenna, which is itself attached to the floor of the station, circled in the screenshot below.

The ball seems to hover in midair when Deng isn't actively hitting it with his paddle, which supports our theory.

In short, this is a far cry from Earth-based table tennis — which is fair enough, considering confined space and lack of gravity.

But that doesn't explain why Deng didn't pick up a game with the two other crew members, who traveled to the space station alongside him back in November. Our theory? Maybe they're just not too keen on the game.

The mission marked the fourth crewed mission to have docked with Tiangong, a space station which was constructed in record time over the last couple of years.

Deng and his colleagues are roughly one month into their six month mission, meaning that they'll likely have a lot more time for ping pong — solo or otherwise.

It's not the first time we've seen taikonauts play ping-pong in space. Back in 2016, Chinese state media released footage of two astronauts playing ping-pong on board the the since-retired Tinagong-2 space lab, which is a predecessor of the current Tiangong space station.

This game, however, involved the ping-pong ball floating back and forth through space from one player to another — a bit more like the earthly version of the sport.

A different crew of astronauts also showed off their ping-pong prowess using what appears to be the same contraption Deng used in a video shared by Chinese media in 2021.

"We have a lot of activities to do in space, we can jog, listen to music, and even play ping-pong," a crew member told reporters at the time.

Staying active in space is extremely important, as researchers have found that staying in microgravity for prolonged periods is linked to muscle atrophy, among other negative health effects.

Over the decades, astronauts have found myriad ways not only keep their bodies but also their minds active — and it seems like a bizarre ping-pong contraption is now one of them.

Read This Next
Moon Wrestling
The Head of NASA Is Scared Chinese Astronauts Will Seize Portions of the Moon
Monkey Business
China Plans to Send Monkeys to Space Station to Have Sex With Each Other
Sad ROSS
Russia's New Space Station Gets Sadder the More We Hear About It
Blast Off
Former Astronaut Details Quest to Grow Cannabinoids in Space
Sanctions Chess
Russia Says It'll Buy Space Parts From China, But China Says Uhhh Not So Fast
More on Off World
Take Cover
Yesterday on the byte
Space Startup Blows Up Another Giant Inflatable Space Station Module
Rock Blast
Yesterday on the byte
Scientists Say There's an Upside to Those Rocks That Keep Bludgeoning the James Webb
Meathead Theory
Yesterday on the byte
Professor Receives Insane Email Claiming "Biological" Green Comet Is Giving Off "Meat Smoke"
READ MORE STORIES ABOUT / Off World
Keep up.
Subscribe to our daily newsletter to keep in touch with the subjects shaping our future.
+Social+Newsletter
TopicsAbout UsContact Us
Copyright ©, Camden Media Inc All Rights Reserved. See our User Agreement, Privacy Policy and Data Use Policy. The material on this site may not be reproduced, distributed, transmitted, cached or otherwise used, except with prior written permission of Futurism. Articles may contain affiliate links which enable us to share in the revenue of any purchases made.
Fonts by Typekit and Monotype.