Scientists Now Know When the First Stars Formed in the Universe

“It’s unlikely we’ll be able to see any earlier into the history of stars in our lifetime.” 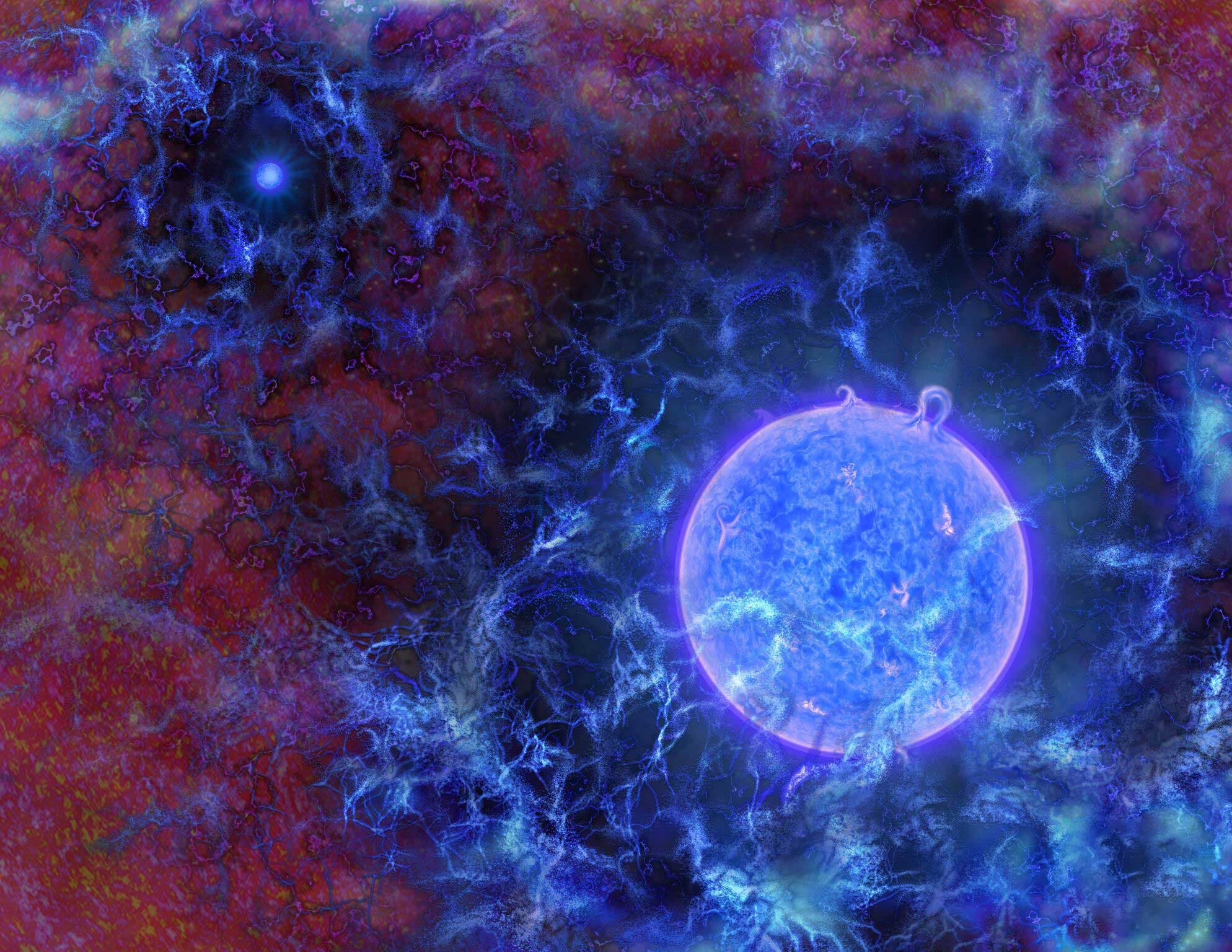 Using a compact radio antenna 10 years in the making, researchers have discovered evidence of the oldest suns in the known universe. They've published their findings in Nature.

When we look at stars, we see them as they were, not as they are. That's because the light takes time to travel from its source to our eyes. With powerful enough telescopes, we could directly see the very oldest stars in the universe. Unfortunately, those telescopes don't exist.

Instead, we have to rely on indirect evidence. So that's what a team of astronomers from Arizona State University (ASU), the Massachusetts Institute of Technology (MIT), and the University of Colorado at Boulder set out to find. Their search was part of the Experiment to Detect the Global EoR (Epoch of Reionization) Signature (EDGES) project, which is funded by the National Science Foundation (NSF)

The researchers posited that the earliest stars likely changed the universe's background electromagnetic radiation, also known as cosmic microwave background (CMB). Although they knew what they were looking for — a small change in the intensity of CMB radio signals between certain wavelengths — finding it wasn't going to be easy, considering everything else going on in the universe.

"Sources of noise can be 10,000 times brighter than the signal — it's like being in the middle of a hurricane and trying to hear the flap of a hummingbird's wing," Peter Kurczynski, an NSF program director, noted in a press release.

Based on previous research, the team also knew that the universe's earliest stars released large quantities of ultraviolet (UV) light. When this light interacted with hydrogen atoms, it would absorb CMB photons, leaving a signal in radio frequencies; an indication that stars were forming.

Using a customized radio antenna in the Australian desert, the team collected radio wave data until, at last, they found what they'd been looking for: a clear dip in CMB intensity. This dip indicated that ancient suns first emerged about 180 million years post-Big Bang. For several years the researchers checked and rechecked the data before concluding its validity.

“Finding this minuscule signal has opened a new window on the early universe,” said lead investigator Judd Bowman, an ASU cosmologist, in the press release. “It’s unlikely we’ll be able to see any earlier into the history of stars in our lifetime.”

Not only does this discovery give us a glimpse of the universe's earliest stars, it may also help us solve one of its greatest mysteries: the nature of dark matter.

The signal at the center of the EDGES project was twice as intense as expected, indicating that the absorbing hydrogen atoms were colder than researchers thought they'd be. One possible explanation could be an interaction with dark matter.

"If that idea is confirmed, then we've learned something new and fundamental about the mysterious dark matter that makes up 85 percent of the matter in the universe," said Bowman. "This would provide the first glimpse of physics beyond the standard model."

Even without the possible dark matter connection, the discovery is groundbreaking. The EDGES project team's follow-up projects, designed to build off this remarkable research, are already in the works.

Read This Next
Bangs and Bounces
Scientists Say Stuff Might Have Been Happening Before the Big Bang
Dark Secrets
Scientists Just Detected the Oldest Dark Matter Ever Observed
Walled Up
Scientists Say Space Is Filled With Invisible Walls
Space Lumps
Scientists Say We May Be Extremely Wrong About the Universe
Turn Back Time
Scientists Say There May Be a Mirror Universe in Which Time Runs Backwards
More on Hard Science
Warped Tour
Thursday on futurism
Professor Believes Door to Warp Drive May Lie With Ethylene Glycol
Sky Bursts
Thursday on the byte
Astronomers Intrigued by 25 Mysterious Repeating Radio Signals From Deep Space
Tractor Beam
Jan 26 on the byte
Scientists Build Working Tractor Beam, Although It's Comically Tiny
READ MORE STORIES ABOUT / Hard Science
Keep up.
Subscribe to our daily newsletter to keep in touch with the subjects shaping our future.
+Social+Newsletter
TopicsAbout UsContact Us
Copyright ©, Camden Media Inc All Rights Reserved. See our User Agreement, Privacy Policy and Data Use Policy. The material on this site may not be reproduced, distributed, transmitted, cached or otherwise used, except with prior written permission of Futurism. Articles may contain affiliate links which enable us to share in the revenue of any purchases made.
Fonts by Typekit and Monotype.