Why Are British Beaches Littered With Dying Marine Life? 3 Things You Need to Know.

“There are places where you are ankle-deep, or calf-deep, in animals." 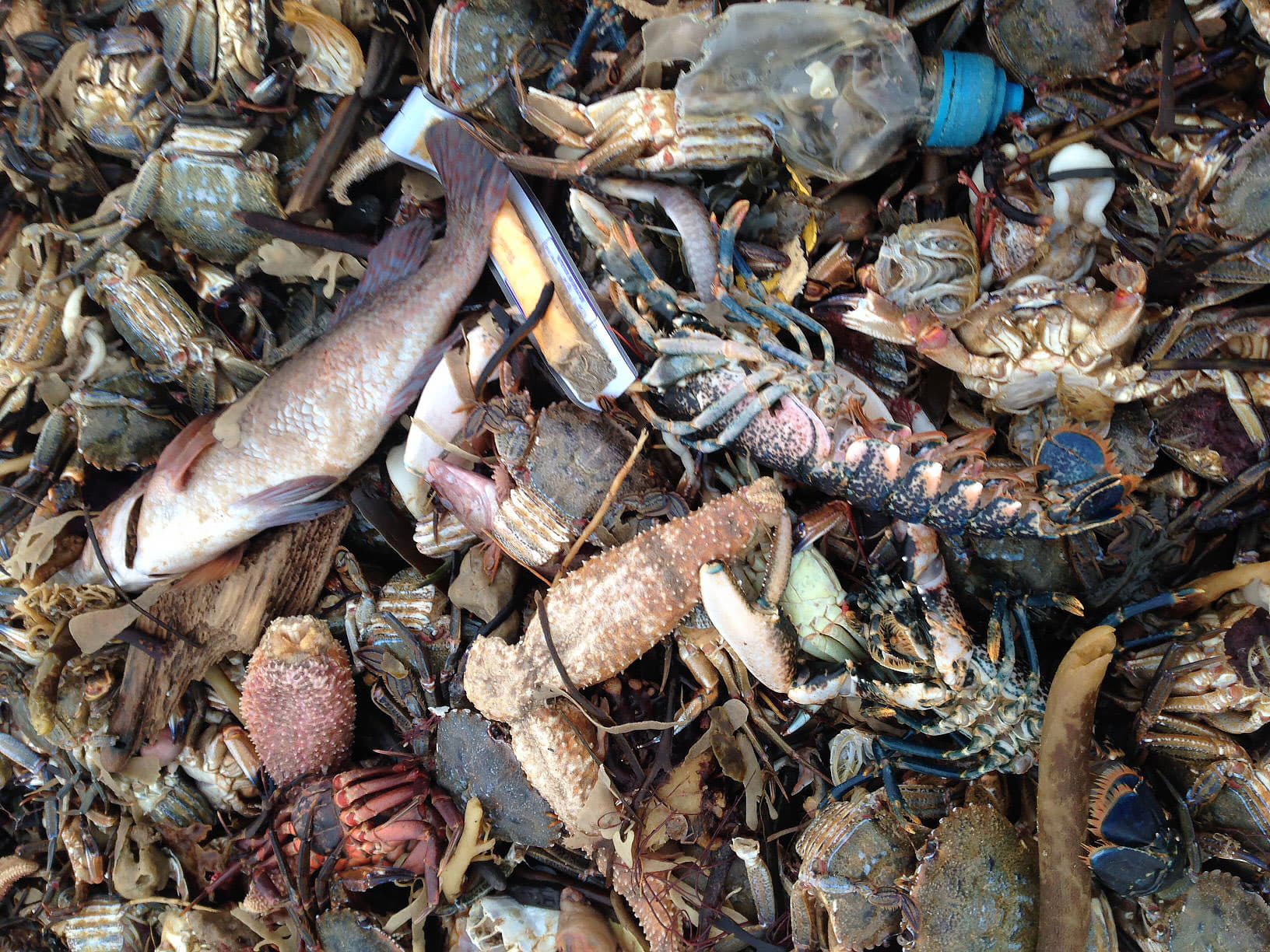 “There are places where you are ankle-deep, or calf-deep, in animals.” Those words, said by Bex Lynam of the marine conservation charity Yorkshire Wildlife Trust to BuzzFeed News, describe an apocalyptic-looking scenario currently found in the United Kingdom. All across the UK’s east coast, marine life like lobsters, starfish, fish and birds have been washing ashore, often injured, dead, or dying.

Huge numbers of our #Marinewildlife affected by the storms on the #NorthSea coast of UK. @NorthSeaWT #BeastFromTheEast pic.twitter.com/Lg65eYnYbF

Rodney Forster, a marine biologist at the University of Hull in the UK, reported to Buzzfeed News that so far a total of 24 species have been found along the coast.

While species are being identified, the number of animals found is so overwhelming that Lynam said, “It’s really hard to quantify the numbers, to be honest.”

Let’s explore the reasons behind this grisly scene, and what this might mean for the future of marine life on the UK’s coastline.

Why is This Happening?

According to Buzzfeed, experts have not confirmed the exact cause of this massacre, but many are looking to the recent “Beast from the East” storm as a cause of this apocalyptic scene.

Very cold sea temperatures and storm wave heights of up to 5 m during the past week have impacted the shallow seabed along the Yorkshire coast, leading to mass strandings of marine life along the shoreline. Data: Cefas Wavenet. pic.twitter.com/v3MpuX9PEY

This drastic temperature drop was also accompanied by strong wind gusts. High winds cause large waves to form, disturbing animals on the seabed and even smothering animals with sediments carried by the waves. These disturbances can also pull marine life up onto shore, as many are observing on the coast. Spring low tides that coincided with this beastly storm worsened these effects.

The combination of the sudden drop in temperature, the extreme winds, and coincidentally low tides seemingly combined into the “perfect” killing agent in this scenario.

Low temperatures can make marine life lethargic; once stranded on shore by low tides and barreling winds, both the lack of water and the extreme cold of the air posed yet another deadly threat. Though the stranding has mostly involved invertebrates, like starfish, crustaceans and shellfish, Forster told Buzzfeed that they could potentially see more large animals, like seals, dolphins, and whales wash ashore if a large portion of their food was relocated or killed.

Could This Happen Again?

While the low tides that coincided with the Beast from the East won’t always occur at the same time as a freezing storm, storms like this are not entirely uncommon. Indeed, the “Beast” is not predicted to be the last storm of the late winter/early spring season.

Additionally, this storm’s intense cold came from a “polar vortex” event currently settled over Europe. While the polar vortex itself is a normal climate feature, its unusual severity and length has been linked to climate change. These connections are still poorly understood and contentious. But some scientists have connected the unusually cold weather in Europe with the freakish warmth currently seen in the Arctic, which appears to be one of the most conspicuous signs yet of a warming planet.

Even if the Beast doesn’t make a yearly appearance, scientists also believe climate change will make intense storms more commonplace and more extreme. As such, this may not be the last time the coastline is littered with marine bodies.

What Might This Mean for the Future of the UK Coastline?

So far, it looks like a series of environmental factors and unlucky circumstances were behind these deaths, all of which could potentially happen again. But, in terms of the event itself — will it affect the coastline permanently? For now, probably not.

Since many of the species washed up on shore have not yet been identified, it’s difficult to say whether any threatened groups may have been impacted by the storm. Yet given that they are mostly invertebrates, many of these species are abundant enough that they shouldn’t be impacted in the long term; The Conversation noted that starfish, one of most-impacted groups, are widespread throughout the Atlantic and highly resilient. Even so, teams of volunteers have been scanning the coast for any survivors, filling truck beds with lobsters to return to the sea once the weather improves. Lynam told The Guardian that given the importance of fishing and shellfishing in the area, “It’s worth saving them so that they can be put back into the sea and continue to breed.”

Lissa Batey, senior living seas officer of the Wildlife Trusts, added: “We can’t prevent natural disasters like this. But we can mitigate against declining marine life and the problems that humans cause.” She noted that one way humans can do this is by creating marine protected areas, and “by ensuring that these sites are large enough and close enough to offer fish, crustaceans, dolphins and other marine life the protection they require to withstand natural events such as this.”

It is important to remember that while this event might not have lasting effects, increases in extreme weather events caused by climate change could continue to threaten these and other species. Given that marine animals already face myriad human impacts, from choking plastic to ocean dead zones to mass extinctions, that’s not great news. This marine apocalypse, it seems, could serve as a reminder of how far the effects of human action could extend.

Read This Next
Watery Graves
The Ocean Is Losing Oxygen. This Scientist Says More “Dead Zones” Will Soon Follow.
Wading Pool
One Day of Greenland’s Ice Melt Could Submerge Florida
Drying Up
Rivers Around the World Are Disappearing
Climate Connection
Bill Gates Attempts to Explain Why He Bought More Farmland Than Anyone Else in America
Elephant Graveyard
Hundreds of Elephants Suddenly Dropped Dead Because of Neurotoxin, Experts Say
More on Earth & Energy
Ghost Flights
Yesterday on the byte
In Disgusting Waste, Airlines Are Flying Thousands of Completely Empty Jetliners
Hot Hot Hot
Yesterday on the byte
China’s “Artificial Sun” Fusion Reactor Just Smashed Its Old Record
Rad Ads
Yesterday on the byte
France Passes Law Requiring Car Ads to Tell People Not to Drive a Car
READ MORE STORIES ABOUT / Earth & Energy
Keep up.
Subscribe to our daily newsletter to keep in touch with the subjects shaping our future.