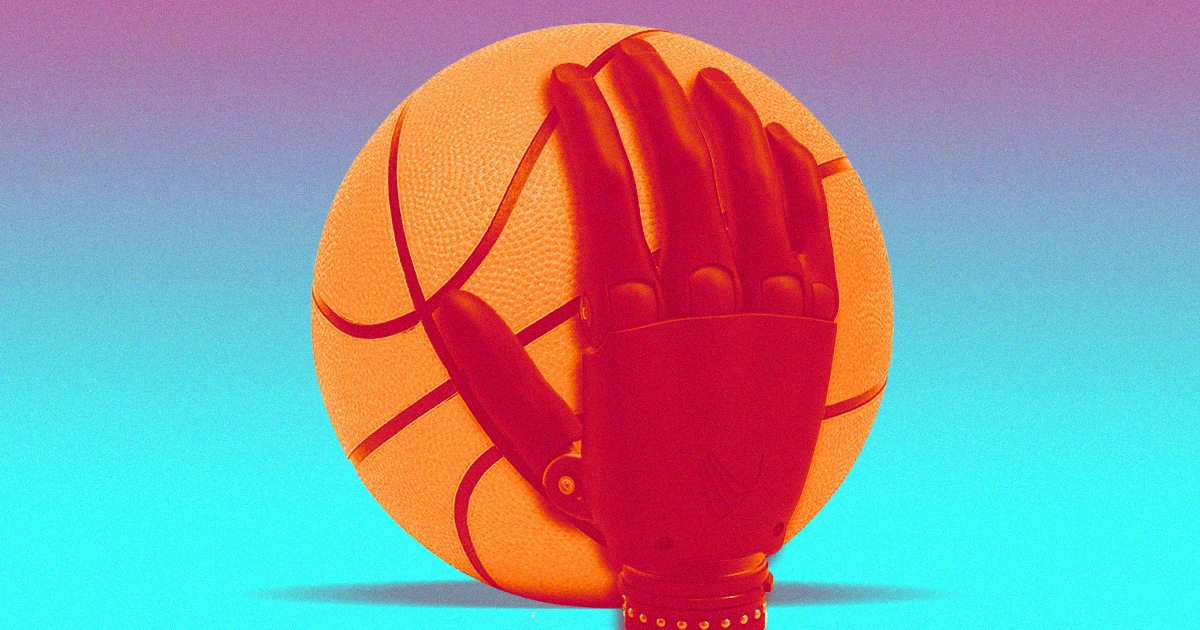 Toyota is on a mission to automate the NBA — it's built a six-foot-ten robot called Cue 3 that can nail three-pointers all day long.

In a demo for The Associated Press, Cue 3 successfully threw five shots from the three-point line out of eight attempts — which would be really good for a professional human player, and shows that robots are starting to handle more complex physical maneuvers than ever before.

Cue 3 looks like it was draped in chainmail — Toyota told the AP that it deliberately wanted to avoid the sleek, white Apple Store-esque look seen in "iRobot" and other common renderings of humanoid robots.

Keeping with that image, Cue 3 doesn't have a humanoid face. Rather, sensors in its torso create a 3D map of its surroundings that allow the robot to calculate how hard and high to toss the basketball.

Today's robots, for all their bells and whistles — and sleek, iPhone-like designs — still generally excel only at extremely narrow tasks, be it assembling a car or shuttling items in a warehouse. As such, Cue 3 can't run, dribble, or dunk.

But it excels at what it does. And given the complexity of successfully sinking a three-pointer — something this writer could never nail in gym class — Toyota's sportsbot may signify a new era for precision tasks in robotics.

More on basketball: AI Coaches Are Here To Unleash Your Inner LeBron

Read This Next
FROM THE DEPT. OF THINGS TO BUY
Best Streaming Services for Sports in 2022
Diner Drama
People Furious at Robot Serving Pancakes at Denny's
Robot Violence
YouTube Accidentally Removed Robot Battle Videos for "Animal Cruelty"
Buzz Off
Tiny Spies: This Insect-Like Flying Robot is Smaller Than a Penny
Guardian Exoskeleton
The U.S. Military is Buying a Brutal-Looking Powered Exoskeleton
More on Robots & Machines
FROM THE DEPT. OF...
Tuesday on futurism
Sustainable Personal Care Items to Add to Your Medicine Cabinet
FROM THE DEPT. OF...
Monday on futurism
Best Gaming Routers of 2022
FROM THE DEPT. OF...
Monday on futurism
Best Smart TVs of 2022
READ MORE STORIES ABOUT / Robots & Machines
Keep up.
Subscribe to our daily newsletter to keep in touch with the subjects shaping our future.
+Social+Newsletter
TopicsAbout UsContact Us
Copyright ©, Camden Media Inc All Rights Reserved. See our User Agreement, Privacy Policy and Data Use Policy. The material on this site may not be reproduced, distributed, transmitted, cached or otherwise used, except with prior written permission of Futurism. Fonts by Typekit and Monotype.