Okay, this is dark. 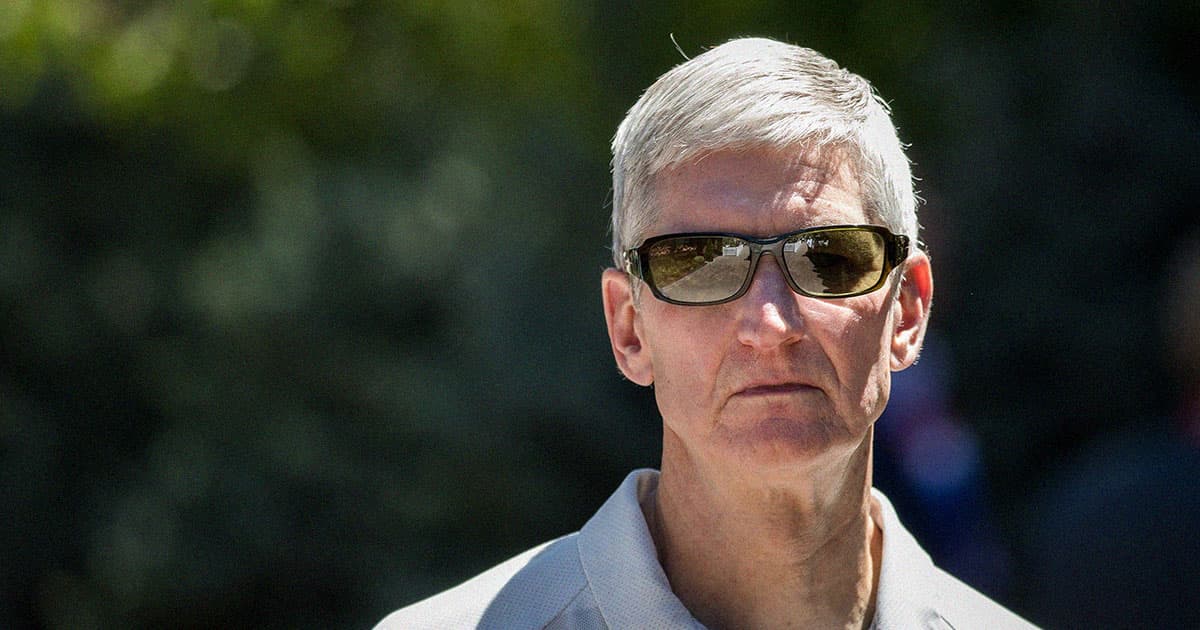 Apple's CEO has taken out a restraining order against a stalker who he says keeps emailing him photos of loaded guns and creeping around outside his house.

As The Mercury News reports, a Virginia woman has spent the past year menacing Apple CEO Tim Cook, escalating from sending him photos of a loaded gun and bizarre roommate applications to driving cross-country in a Porsche to stalk his Palo Alto home — all of which led a judge to grant him a wide-ranging restraining order against the woman, which bars her from owning firearms, entering Apple premises, speaking to Apple employees, or going to Cook's house.

It gets weirder: according to the report, the woman believes she is the CEO's wife and mother to his children, and uses the last name "Cook" on Twitter. Cook, it bears mentioning, is gay and has been out about that since 2014.

The woman's obsessive behavior towards the Apple CEO appears to have begun in the fall of 2020, the report noted, when Cook noticed her tagging him on Twitter. On Halloween of that year, she tweeted continuously about the relationships she claims they had, and thereafter began escalating and "becoming threatening and highly disturbing," Cook's application for a restraining order reads.

In one of her more than 200 emails, the woman reportedly said that she was "almost done" waiting to have a sexual relationship with Cook, Mercury News added.

Alongside Cook, the 45-year-old woman's Twitter — which Futurism has reviewed but will not link to protect the woman, who may well be struggling with mental health issues — also mentions Google CEO Sundar Pichai and Microsoft CEO Satya Nadella in a threatening manner.

In her applications to be Cook's roommate, according to Mercury News' report, the woman listed corporations she's registered in Virginia, California, and New York that all have "highly offensive" names and boast Cook as an executive. After sending the roommate applications, she then reportedly drove cross-country in a Porsche Macan SUV in October 2021 and tried to enter his building, only to wait around for him outside after being rebuffed by security. Thereafter, she fled but was found by police and arrested, and allegedly told officers that she "could get violent" when she was in custody.

After her Palo Alto arrest, the woman continued to escalate further, the report noted, demanding hundreds of millions of dollars from Cook, tweeting violent things about him, and demanding him to move. According to the CEO's since-granted restraining order application, the woman's continued presence in the South Bay makes her more dangerous.

Though this isn't Cook's first stalker or even the first to show up at his house, this series of behavior is uniquely bizarre and freaky, even by the standards of Apple obsessives.

When tech CEOs become celebrities, they seem to get all the same treatment granted to movie stars — right down to the stalkers.

READ MORE: Apple CEO Tim Cook targeted by possibly armed stalker who came to his home and is still in the area, company alleges [The Mercury News]

Read This Next
FROM THE DEPT. OF THINGS TO BUY
Save $60 on Brydge's Stellar iPad Pro Keyboard
FROM THE DEPT. OF THINGS TO BUY
Apple Announced Its Fastest MacBook Air Yet at WWDC 2022
Heads Will Roll
Someone Stole a Bunch of Human Heads from a Medical Truck
Bad Cops
Cops Allegedly Used a Sexual Assault Survivor's DNA to Arrest Her for Property Crime
Apple Stalker
Man Caught Planting Apple AirTag on Ex Girlfriend's Car to Stalk Her
More on Future Society
I Silence Thee
2:15 PM on futurism
Leaked Messages Seem to Show Elon Musk Using Twitter to Punish His Enemies
Gas Giant
Yesterday on the byte
Journalist Eats Lab-Grown Chicken, Gets "Weirdly Gassy"
Musk Rats
Thursday on the byte
Twitter Is Quietly Re-Suspending the Lunatics Elon Musk Let Back On
READ MORE STORIES ABOUT / Future Society
Keep up.
Subscribe to our daily newsletter to keep in touch with the subjects shaping our future.
+Social+Newsletter
TopicsAbout UsContact Us
Copyright ©, Camden Media Inc All Rights Reserved. See our User Agreement, Privacy Policy and Data Use Policy. The material on this site may not be reproduced, distributed, transmitted, cached or otherwise used, except with prior written permission of Futurism. Articles may contain affiliate links which enable us to share in the revenue of any purchases made.
Fonts by Typekit and Monotype.