This Biotech Clothing Automatically Ventilates When You Start to Sweat 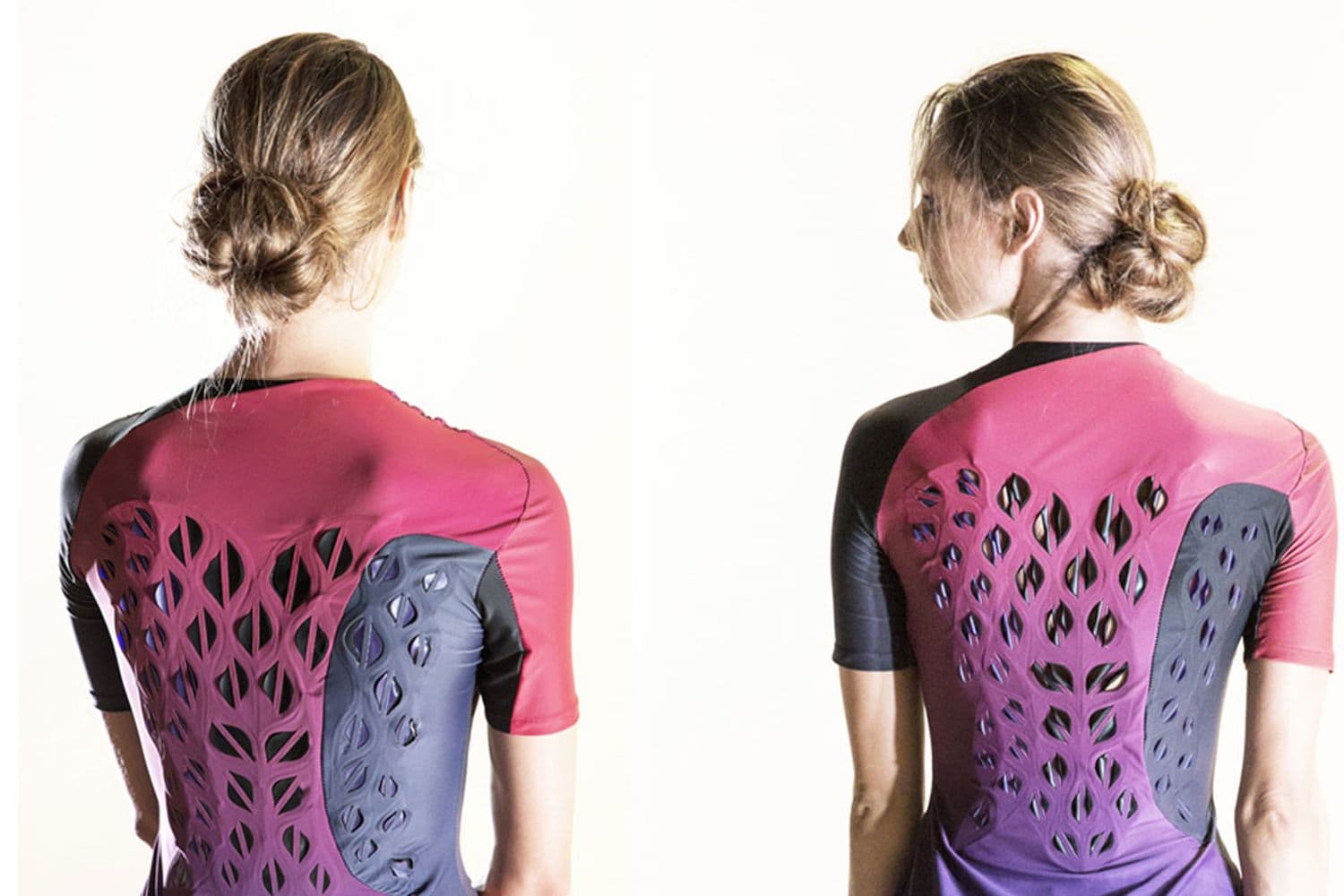 Sweating can be unpleasant, especially when you're in public spaces and can't effectively cool off or change clothes. You could resort to standing by the nearest fan or AC unit, but those aren't always available. Enter a group of MIT scientists who are on track to create an alternative way to cool down: a shirt that ventilates whenever it senses sweat.

MIT bio-engineer Wen Wang teamed up with Lining Yao, a PhD Candidate at Tangible Media Group, MIT Media Lab, and several other colleagues in an attempt to use shape-shifting bacteria on fabrics to make it moisture sensitive. After discovering what caused the bacteria to expand and contract — changes to the proteins inside the bacterial spores — the team used pure bacterial protein to confirm their speculations. Ultimately, they decided to use whole bacteria in their test garments due to the microbe's stability and the ease with which it can be produced.

Wang and her team discovered that a single layer of bacteria on a latex sheet wouldn't produce the desired effect. Instead, after being exposed to the high humidity of a 3D printer, the resulting latex folded towards the bacterial side while at room temperature. However, layering both sides with the bacteria would keep it flat at room temperature, until one side is exposed to heat. At this point, the bacteria would expand, causing the latex sheet to bend outward.

Using Bacillus subtilis, a bacteria found in soil, a triple-layer fabric with responsive vents was made. Volunteers wearing the shirt were monitored while running and cycling, and after five minutes, the vents within the shirt began opening up, allowing sweat to evaporate and lowering the body temperatures of the wearer.

"When I wore the control version, I felt really, really humid and hot,” said Wang to The Scientist. “When I wore the functional one, once I started to sweat, it opened very naturally, and then I could feel air flow come to my back.

“That’s the advantage of our garment — it’s helping you remove the moisture immediately [through evaporation]. Then body temperature will drop.”

The researchers still need to make the clothing washable before moving forward with plans to commercialize their tech, which includes a shoe with responsive vents in the sole. New Balance already has ties to the project, since it acted a sponsor, but other companies have begun approaching Wang and her team.

If bacteria-layered clothing such as Wang's shirt is made widely available, expect it to be marketed towards those who work out, athletes, and everyone who perspires in the heat. What better type of clothing to wear in the summer than one that evaporates sweat?

Read This Next
Brands We Love
There's a Bacterial Bonanza in Your Bed, but These High-Tech Sheets Can Change That
Unethical Teamwork
Americans Built Tech for China's Sinister "Re-Education Camps"
Futurism
MIT Has Started Issuing Diplomas Using Blockchain Technology
More on Future Society
Rough
9:09 PM on futurism
Elon Musk's Twitter Is Reportedly Failing Miserably to Contain Horrific Child Abuse Content
YouTube Propaganda
4:34 PM on the byte
Experts Say There's Something Very Weird About North Korean YouTubers
Bird Crap
Feb 4 on the byte
It Looks Like Elon Musk Is Actually Building a Twitter Payment Platform
READ MORE STORIES ABOUT / Future Society
Keep up.
Subscribe to our daily newsletter to keep in touch with the subjects shaping our future.
+Social+Newsletter
TopicsAbout UsContact Us
Copyright ©, Camden Media Inc All Rights Reserved. See our User Agreement, Privacy Policy and Data Use Policy. The material on this site may not be reproduced, distributed, transmitted, cached or otherwise used, except with prior written permission of Futurism. Articles may contain affiliate links which enable us to share in the revenue of any purchases made.
Fonts by Typekit and Monotype.