We finally have views of both the exterior *and* interior. 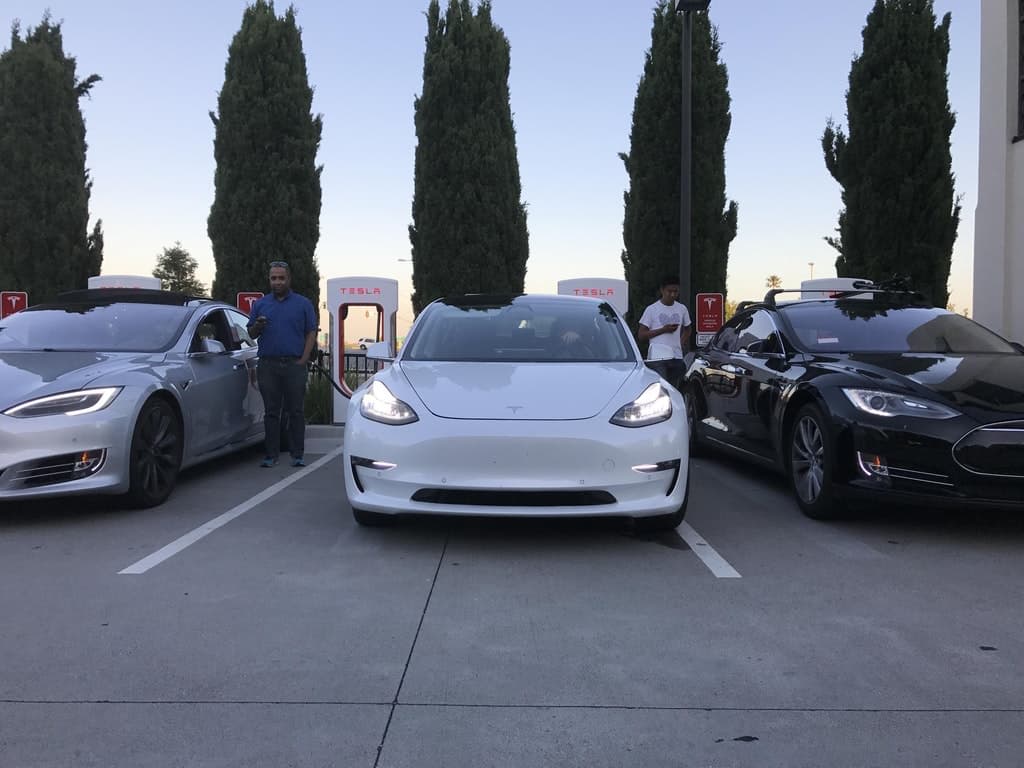 Image by You You Xue/Imgur

New photos of the Tesla Model 3 — the most anticipated electric car of the decade, if not all time — have been leaked by You You Xue, who claimed on Reddit that Xue came across the new model randomly in San Matteo, and “jumped straight out of the car and started snapping photos!” The car is due to be launched sometime this year.

Tesla has been extremely secretive about the project, going as far as to camouflage and cover the vehicle in every road test it has conducted to date.

The photos show us the interior of Tesla's upcoming vehicle, including its dashboard with a 43-cm (17-inch) display, the steering wheel, charging ports, and wheels.

This has been the latest piece of information in a series of exciting updates concerning the Model 3. We know what the robots that will build the cars look like, that it will have an updated autonomous mode, and that production of the battery cell has begun at Gigafactory 1 in Nevada.

At this point, 2017 looks to be the year of Elon Musk, who is pushing the boundaries of almost any industry he enters: from space rockets, to solar panels, to autonomous vehicles — the sky seems to be the limit for the modern technological prophet.

Read This Next
It Was the Tesla
Manslaughter Case Has a Strange Twist: Tesla That Killed Couple Was on Autopilot
Full Self-Delusion
Survey: 42% of Tesla Autopilot Drivers Think Their Cars Can Entirely Drive Themselves
Musk Antics
Elon Musk Has a Big Problem on His Hands
LIDARally
Volvo's New Electric Car Won't Drive if It Detects That You're Drunk
Please Elon
Why These Tesla Owners Are Going on a Hunger Strike Against Tesla
More on Advanced Transport
Out With a Bang
Tuesday on the byte
Driver Says His Ford F-150 Lightning Made a "Loud Boom" and Died When He Plugged It In
Deep in a Hole
Tuesday on the byte
Something Very Weird Is Going on at Elon Musk's Boring Company
Pizza Personnel
Nov 23 on the byte
Domino's Buying Hundreds and Hundreds of Electric Delivery Vehicles
READ MORE STORIES ABOUT / Advanced Transport
Keep up.
Subscribe to our daily newsletter to keep in touch with the subjects shaping our future.
+Social+Newsletter
TopicsAbout UsContact Us
Copyright ©, Camden Media Inc All Rights Reserved. See our User Agreement, Privacy Policy and Data Use Policy. The material on this site may not be reproduced, distributed, transmitted, cached or otherwise used, except with prior written permission of Futurism. Articles may contain affiliate links which enable us to share in the revenue of any purchases made.
Fonts by Typekit and Monotype.