And it's set to drive scientific discovery forward.

The construction of the world’s largest telescope has begun. At a ceremony at the European Southern Observatory’s (ESO) Paranal Observatory in Chile, officials gathered to celebrate the first stone of the European Extremely Large Telescope’s (E-ELT) long-awaited construction. Sophisticated telescope projects like the E-ELT take many years, so we can expect another similar ceremony sometime in 2021, when the E-ELT will see first light.

The Chilean President, Michelle Bachelet Jeria, attended the ceremony. She was welcomed by the Director General of ESO Tim de Zeeuw, by ELT Programme Manager Roberto Tamai, and by other officials from the ESO. Staff from the La Silla Paranal Observatory, and numerous engineers and technicians—as well as numerous representatives from Chilean government and industry—also attended the ceremony.

“With the symbolic start of this construction work, we are building more than a telescope here.” – President of the Republic of Chile, Michelle Bachelet Jeria

In her speech, the President spoke in favor of the E-ELT, and in support of science and cooperation. “With the symbolic start of this construction work, we are building more than a telescope here: it is one of the greatest expressions of scientific and technological capabilities and of the extraordinary potential of international cooperation.”

At the ceremony, a time capsule from ESO was sealed into place. The capsule is a hexagon shaped, one-fifth scale model of the E-ELT containing a poster made of photographs of current ESO staff, and a copy of the book detailing the E-ELT’s science goals.

The first stone ceremony is definitely an important milestone for this Super Telescope, but it’s just one of the milestones reached by the E-ELT in the past two weeks.

Tim de Zeeuw, ESO’s Director General, is clearly excited about the progress being made on the E-ELT. At the contract signing, de Zeeuw said, “This has been an extraordinary two weeks! We saw the casting of the ELT’s secondary mirror and then, last Friday, we were privileged to have the President of Chile, Michelle Bachelet, attend the first stone ceremony of the ELT. And now two world-leading European companies are starting work on the telescope’s enormous main mirror, perhaps the biggest challenge of all.” 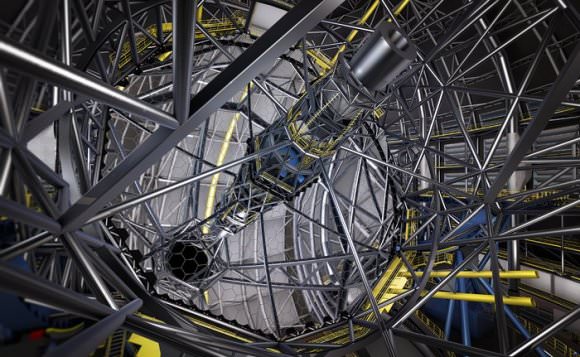 It’s taken an enormous amount of work to get to the construction stage of the world’s largest telescope. Scientist’s, engineers, and technicians have been working for years to get this far. But without the contribution of Chile, none of it would happen. Chile is the world’s astronomy capital, and they continue working with the ESO and other nations to drive scientific discovery forward.

The E-ELT has three broad-based science objectives. It will:

Along the way, it will no doubt raise new questions that we can’t even imagine yet.

A European Astronomical Observatory is Announcing an “Unprecedented Discovery”

The Search for Life: New Tech Opens a Universe of Alien Worlds