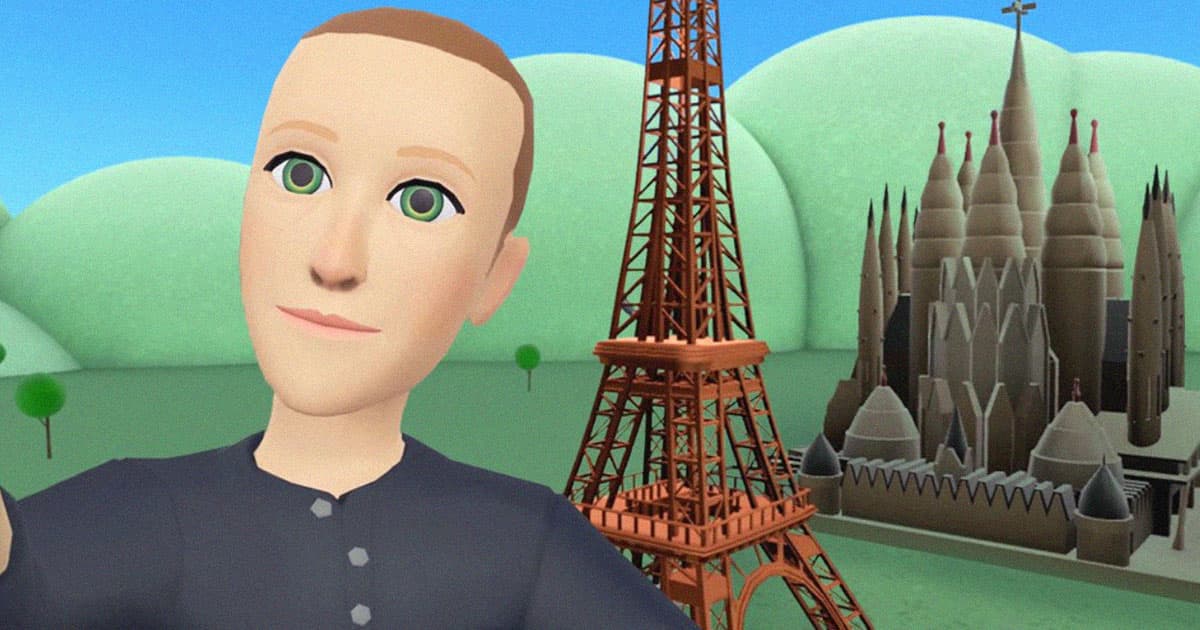 Wave of Criticism Hits Zuckerberg's Metaverse for Looking Like Crap

There's no way to sugarcoat it, even if we wanted to. Facebook-turned-Meta's Metaverse — into which Meta has been pouring billions of dollars — looks bad. Unfathomably bad.

Yesterday, CEO Mark Zuckerberg took to Facebook to post what apparently was meant to be a celebratory screenshot of Meta's Horizon Worlds, a VR game where the digital selves of folks worldwide can gather. The game was just released in France and Spain, and the ruler of all metamates wanted to share the good news.

As waves of critics pointed out, the design of this "immersive" world is astoundingly underwhelming. In the cursed screenshot, Zuck's pasty, robotic avatar — the design of which is perhaps a half step above a Wii Mii — is pictured in front of a sparse, sad landscape upon which arbitrarily sized replicas of France's Eiffel Tower and Spain's Tibidabo Cathedral are uncomfortably plopped.

In Zuckerberg's defense, VR graphics don't always translate that well to non-VR displays. But whatever this is seems like a very far cry from the Metaverse vision that Zuckerberg's been trying to sell — and perhaps most importantly, it looks to be very behind the likes of digital worlds like Fortnite and Roblox, which are already finding massive success.

This is bad. They should stop. It doesn't look like an actual product. There's nothing 'immersive' about this. It doesn't have to look realistic if it has a creative direction. When your core product looks like the painted walls of an abandoned daycare center u have to wonder. pic.twitter.com/sclPmBT8Ng

The netizens of Twitter, of course, had a lot to say.

"Facebook spent $10 billion on Metaverse projects in 2021," wrote one user. "The graphics look like they came out of a computer game developed in 1997."

"So as far as I can tell, the Metaverse is just Animal Crossing but you're being hunted by Mark Zuckerberg," quipped another.

"Billions and billions poured into it and this is the result," wrote yet another, who included a photo of a different and equally terrible screen grab of Horizon Worlds in which one can see that, after years of development, avatars still don't have legs, "The Sims but worse, and with nothing below the torso. Wonderful stuff."

Horizon Worlds does have a Wendy's somewhere, so hats off to that. But to call the world in this image "immersive" — well, that's a tough sell. In any case, we wish Zucko all the best at his Q3 earnings call.

READ MORE: Does Mark Zuckerberg Not Understand How Bad His Metaverse Looks? [Forbes]

To Meta Predator
Experts Warn of Child Predators in Mark Zuckerberg’s Metaverse
2. 8. 22
Read More
Mark Zuckerberg Turns Into Spider-Man With New VR Gloves
2. 10. 17
Read More
Facebook Is Investing a Staggering $3 Billion in Virtual Reality
1. 18. 17
Read More
+Social+Newsletter
TopicsAbout UsContact Us
Copyright ©, Camden Media Inc All Rights Reserved. See our User Agreement, Privacy Policy and Data Use Policy. The material on this site may not be reproduced, distributed, transmitted, cached or otherwise used, except with prior written permission of Futurism. Articles may contain affiliate links which enable us to share in the revenue of any purchases made.
Fonts by Typekit and Monotype.