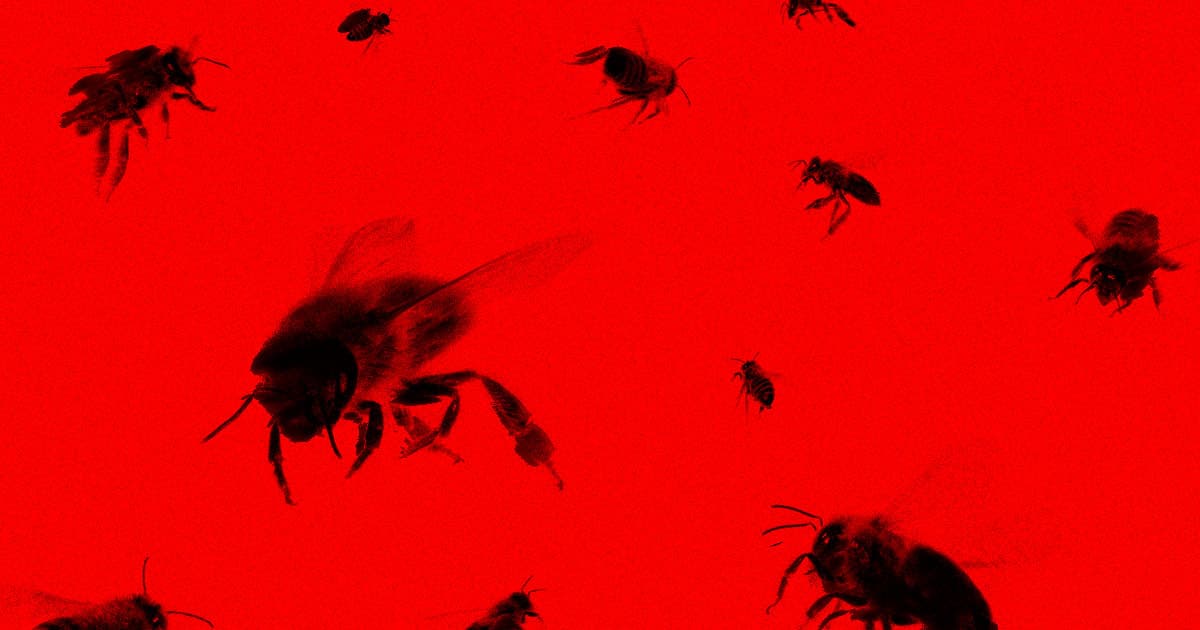 None of Your Beeswax

Last week, a woman in Springfield, Massachusetts decided she was going out not with a bang, but with a buzz after allegedly unleashing hundreds of bees on police officers trying to evict another homeowner, according to the Associated Press.

The deputies arrived at the house around 9:15 am where protesters had already gathered.

Little did they know that they were in for an early morning buzzkill.

Just minutes later, the woman, Rorie Woods, pulled up to the driveway in her car with up to five beehives in tow, immediately shaking the hives, the cops' report alleges.

When one of the deputies tried to stop her, Woods broke one of the hives and threw another off the trailer, sending the bees into a frenzy.

But Woods wasn't done yet. The bee-wielding warrior quickly donned a beekeeper suit and placed another enraged hive of bees in front of the house's entrance.

While all this was going down, some of the deputies fled inside the building. Three of the cops got stung, as well as their photographer, who was rushed to the hospital, but later recovered, according to the Washington Post.

After some floundering, the cops got a hold of the situation and arrested Woods. While escorting her to the police cruiser, one of the deputies told her that he and his colleagues were allergic to bees.

"Oh, you're allergic? Good," she replied, according to the police report.

Woods was apparently not alone in her ire over the eviction notice, as several other protestors had gathered in the nearby cul-de-sac to prevent what they claimed to be a wrongful conviction, the AP reports.

According to MassLive, Woods was one of 21 Massachusetts residents who appealed her eviction in 2018 with the help of the Massachusetts Alliance Against Predatory Lending. At the time, she was living on disability and in the middle of a personal battle with cancer.

Woods was released without bail later that day and potentially faces multiple assault charges, according to MassLive.

More on bees: Court Rules That Legally, Bees Can Be Classified as Fish

From the Dept. of Bad Ideas
Cops Upload Image of Suspect Generated From DNA, Then Delete After Mass Criticism
10. 9. 22
Read More
Dron't
Drama Engulfs Plan to Zap School Shooters With Taser-Toting Drones
6. 4. 22
Read More
Trigger Happy
Man Bursts Into Flames After Being Tased by Police
11. 8. 21
Read More
+Social+Newsletter
TopicsAbout UsContact Us
Copyright ©, Camden Media Inc All Rights Reserved. See our User Agreement, Privacy Policy and Data Use Policy. The material on this site may not be reproduced, distributed, transmitted, cached or otherwise used, except with prior written permission of Futurism. Articles may contain affiliate links which enable us to share in the revenue of any purchases made.
Fonts by Typekit and Monotype.