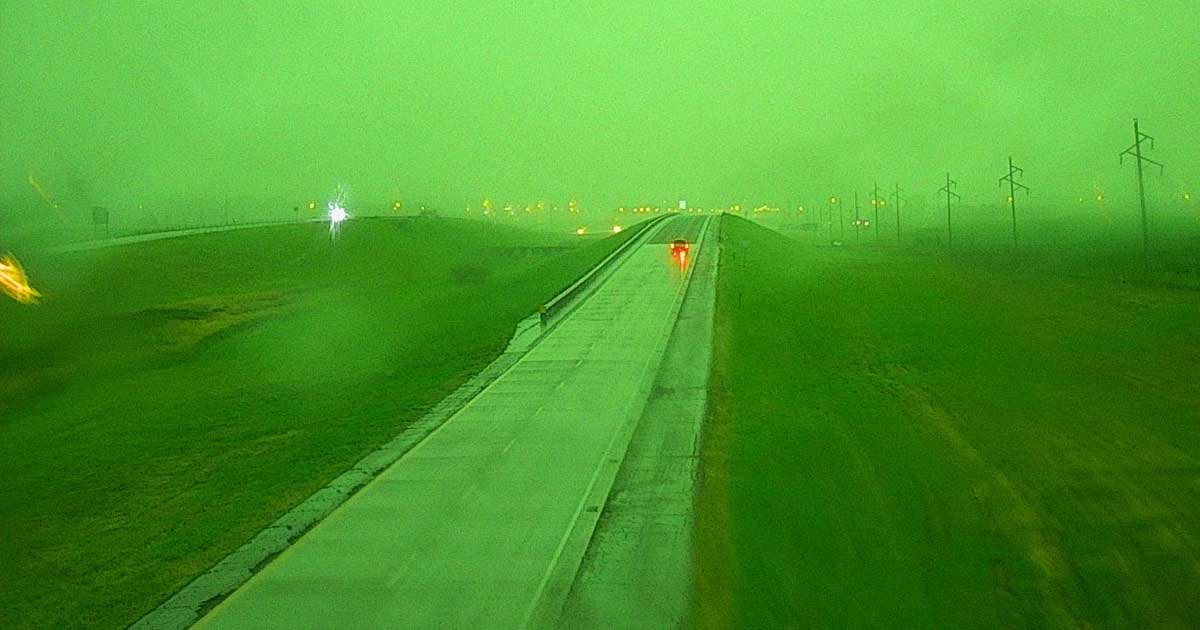 Nothing quite says "apocalypse" like Melon Powerade-colored heavens. Case in point, before a bout of severe weather yesterday, the sky in Sioux Falls, South Dakota turned a shade of green akin to that of the gamma radiation that turned Bruce Banner into the Hulk.

The ominous occurrence took place as a massive thunderstorm system called a derecho swept through the region, injuring several people and wreaking havoc on the property and power supplies of thousands of others.

Derechos are powerful and destructive, known for hurricane-like winds, heavy rains, and a knack for traveling hundreds of miles. But while these mighty weather events have occasionally been known to cause this viridescent phenomenon, The Washington Post reports that the neon hue witnessed yesterday is extremely uncommon.

There are a few theories as to why these green skies occur, with the predominant hypothesis having to do with the way heavy raindrops and hail are able to scatter and reflect light.

As Scientific American explains, thunderstorms often happen in the late afternoon and evening, when the setting sun casts shades of yellow and red across the daytime's blue sky. Water is exceptionally good at holding the color blue, and it's thought that raindrops of a certain diameter can disperse all but cerulean light. Thus, meteorologists posit that if a storm has enough liquid power behind it and hits at the perfect time of day, competing yellow and blue light will combine into green.

Yesterday's storm, however, pushed this conjecture to the brink.

"Even by that metric," WaPo meteorologist Matthew Cappucci wrote, referring to the prevailing theory, "the colors exhibited by storms over Siouxland and along the Interstate 29 corridor of South Dakota, the James River Valley and northwestern Iowa were unlike any in recent meteorological memory."

More on bizarre weather events: Startup Says Its Tech Can Kill Hurricanes Before They Get Strong

Cloud Control
Scientists Propose Electrocuting Clouds to Make it Rain
Feb 10
Read More
California's Future Is Dry, Wet, and Scary
4. 23. 18
Read More
Extreme Weather Events Are More Frequent Than Ever
3. 22. 18
Read More
+Social+Newsletter
TopicsAbout UsContact Us
Copyright ©, Camden Media Inc All Rights Reserved. See our User Agreement, Privacy Policy and Data Use Policy. The material on this site may not be reproduced, distributed, transmitted, cached or otherwise used, except with prior written permission of Futurism. Articles may contain affiliate links which enable us to share in the revenue of any purchases made.
Fonts by Typekit and Monotype.