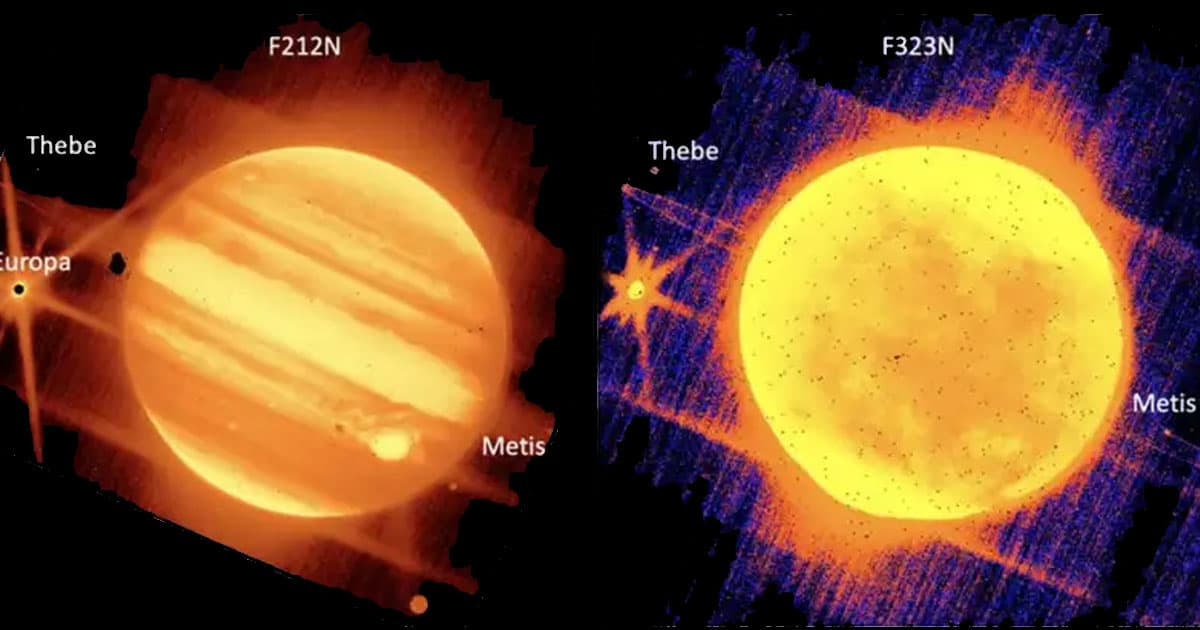 The Webb Telescope Just Quietly Released a Picture of Jupiter

My god, it's beautiful!

My god, it's beautiful!

If you were looking for images of Jupiter amid the fanfare of the James Webb Space Telescope's first aligned images, you wouldn't find one — but that doesn't mean it wasn't hidden there all along.

As New Scientist noted, an incredible shot of the Gas Giant was buried in a document about testing in the veritable treasure trove of Webb imagery NASA released yesterday.

Using Webb's near-infrared camera, dubbed NIRCam, the telescope took one incredible shot with two different filters, which per the commissioning report were meant to focus on different light wavelengths.

Naturally, when Webb-watchers discovered the easter egg, which shows three of Jupiters' moons and its famous red spot, they were pretty stoked.

umm who else saw this in the commissioning report document?? 😍😍😍😍🤯🤯🤯🤯🤯https://t.co/AzwQCf6rat pic.twitter.com/nq13fxdsAM

Per the commissioning report, NASA directed Webb to take the multi-filtered image of Jupiter to see how well it would do when focusing on a "bright planet," as well as its satellite moons and rings — and if this shot is any indication, it performed marvelously.

Capturing Jupiter in all its gaseous glory wasn't just an incredible scientific feat on its own — it also helped prove that the Webb is up to the task of capturing moving targets, such as planets and their moons.

"JWST is fully capable," the report celebrated, "of achieving the discoveries for which it was built."

"JWST was envisioned," its writers continued, "'to enable fundamental breakthroughs in our understanding of the formation and evolution of galaxies, stars, and planetary systems.'"

It looks like the Webb is doing even better than expected on that count.

More on the Webb's celebratory drop: Awesome Tool Shows How Much Better the JWST's Images Are Compared To The Hubble's