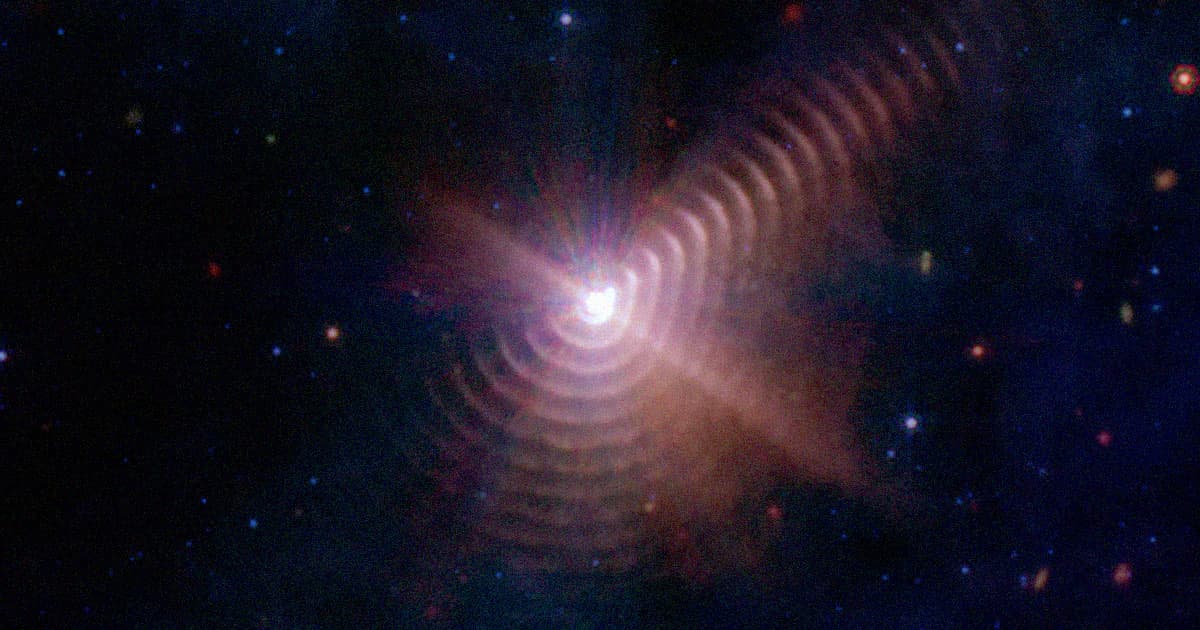 "Like the growth of rings of a tree’s trunk, the dust loops mark the passage of time."

"Like the growth of rings of a tree’s trunk, the dust loops mark the passage of time."

NASA's James Webb Space Telescope has taken yet another gorgeous image of the cosmos — and this time, the result looks a little like something we're very familiar with here on Earth.

In a press release, NASA noted that the telescope's latest stunning image — which shows a binary star system called Wolf-Rayet 140 just over 5,000 light-years away — resembles a human fingerprint, with its concentric rings of stardust, formed by light emanating from the two stars.

"Each ring was created when the two stars came close together and their stellar winds (streams of gas they blow into space) met, compressing the gas and forming dust," the agency's press release reads. "The stars’ orbits bring them together about once every eight years; like the growth of rings of a tree’s trunk, the dust loops mark the passage of time."

🛑 ✋ Look at the fingerprint of a dying star!@NASAWebb revealed at least 17 dust rings emanating from a duo of stars aka Wolf-Rayet 140. Before, we were only able to see 2 of its rings, but with #Webb we can see over a century of dust from this system: https://t.co/vMHAczoczJ pic.twitter.com/GaWfjWztqm

The stunning image is also the subject of a new study published in the journal Nature Astronomy. As National Science Foundation astronomer and lead author Ryan Lau notes, it's a fascinating slice of history.

"We’re looking at over a century of dust production from this system," Lau said in NASA's press release.

"The image also illustrates just how sensitive this telescope is," Lau explained. "Before, we were only able to see two dust rings, using ground-based telescopes. Now we see at least 17 of them."

Unlike other stars, Wolf-Rayet stars emit their distinctive dust clouds — which are made up of hydrogen, carbon, and other elements — as they shed their masses.

"The heavy elements in the wind cool as they travel into space and are then compressed where the winds from both stars meet," the NASA press release notes, "like when two hands knead dough."

The James Webb image captures the stardust as it moves outward from its star system, characteristic of a Wolf-Rayet star — a process as beautiful as it is foundational to the formation of stars.

As NASA notes, it may even provide clues about the formation of our own Sun.

More Webbing: Usually You Can't See Rings on Neptune. With the James Webb, Though... Wow

Psychological Warfare
Experts Excoriate NASA Report Claiming James Webb Wasn't Homophobic
11. 19. 22
Read More
Outing Life
Swiss Government Scientist Says We May Be on the Brink of Discovering Alien Life
9. 13. 22
Read More
Tada!
NASA Officially Unveils First Set of Dazzling James Webb Images
7. 12. 22
Read More
+Social+Newsletter
TopicsAbout UsContact Us
Copyright ©, Camden Media Inc All Rights Reserved. See our User Agreement, Privacy Policy and Data Use Policy. The material on this site may not be reproduced, distributed, transmitted, cached or otherwise used, except with prior written permission of Futurism. Articles may contain affiliate links which enable us to share in the revenue of any purchases made.
Fonts by Typekit and Monotype.