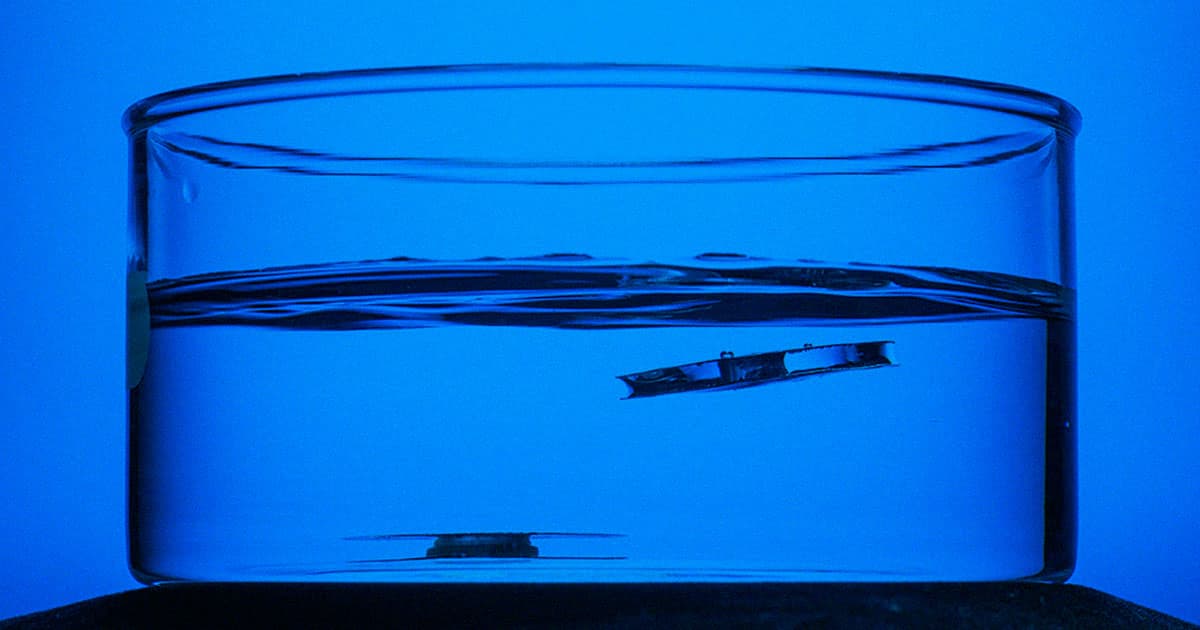 Watch a Piece of Metal Refuse to Sink in Water

Where was this tech when they were building the Titanic?

Where was this tech when they were building the Titanic?

Researchers from the University of Rochester just released a video that looks like an optical illusion. In the clip, they place two seemingly identical metal structures into a glass of water. But while one sinks to the bottom — you know, as you'd expect something metal to do — the other floats.

That's because the structures aren't actually identical — and the one that floats could lead to the creation of unsinkable ships.

On Wednesday, the researchers published a study in the journal ACS Applied Materials and Interfaces detailing their creation of the bizarre unsinkable metal.

Using extremely short laser bursts, they etched air-trapping patterns into two aluminum plates. They then created a structure in which the two plates were parallel to one another, with the etched surfaces facing inward but not quite touching.

The final result looks a bit like a really flat spool, but the tiny distance between the two plates is perfect for trapping air, even if the structure is submerged in water for months or punctured multiple times.

"This could allow ships to be made truly unsinkable," the researchers note in the video, "even if they are severely damaged at sea."

More on unsinkable structures: To Power Villages and Oil Rigs, Russia Sent a Nuclear Reactor on a "Tsunami-Proof" Barge

Scientists Created a New Organic Material That Generates Electricity When Stressed
11. 11. 17
Read More
Scientists Are Creating Materials From DNA
10. 13. 17
Read More
This New “Super” Carbon Is Tough, Elastic, and Electrically Conductive
6. 12. 17
Read More
+Social+Newsletter
TopicsAbout UsContact Us
Copyright ©, Camden Media Inc All Rights Reserved. See our User Agreement, Privacy Policy and Data Use Policy. The material on this site may not be reproduced, distributed, transmitted, cached or otherwise used, except with prior written permission of Futurism. Fonts by Typekit and Monotype.