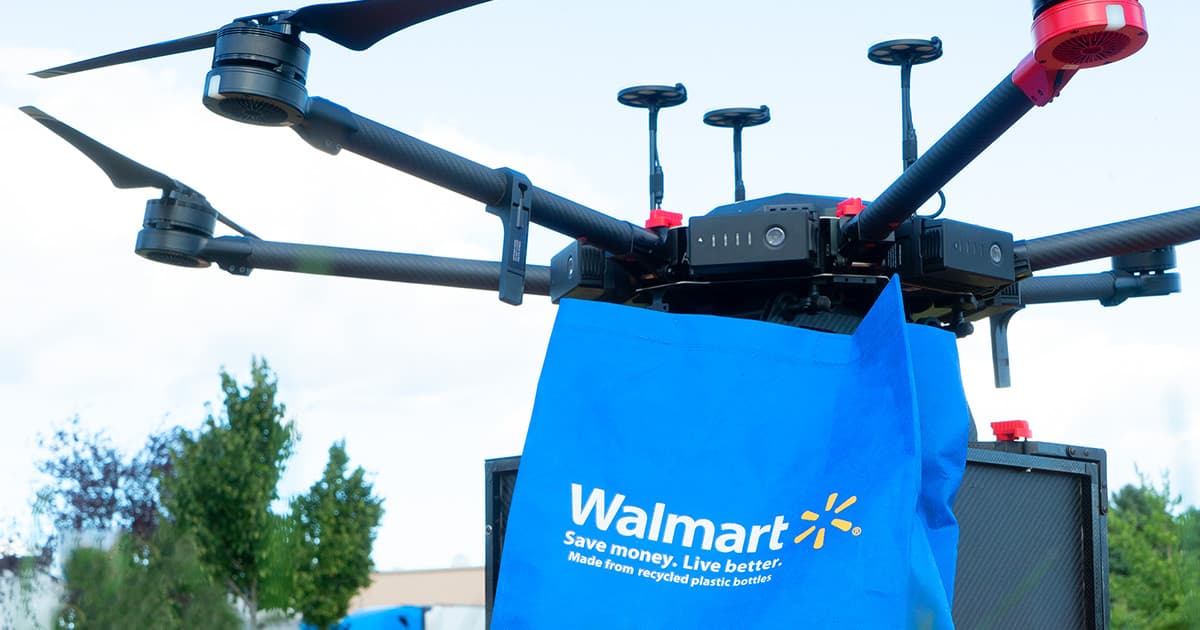 Orders are lowered from eighty feet via a wire.

Orders are lowered from eighty feet via a wire.

The pilot launched today in Fayetteville, North Carolina, and is limited to select grocery and household essential items from the retailer's local stores.

"We know that it will be some time before we see millions of packages delivered via drone," reads a press release from Tom Ward, senior vice president of customer product at Walmart. "That still feels like a bit of science fiction, but we’re at a point where we’re learning more and more about the technology that is available and how we can use it to make our customers’ lives easier."

Dangling from a Wire

Flytrex's drones can cruise at 32 mph at 230 feet and can release their payload, stored inside a delivery box below the rotors, via a wire release mechanism. According to the company's website, orders are lowered using the wire from eighty feet, ensuring a "quiet and secure delivery."

The news comes after Amazon was designated an "air carrier" by the Federal Aviation Administration in August, meaning it can start trialing drone package deliveries.

Amazon is also developing its own proprietary drones that transform from a helicopter configuration to an airplane one. They can carry five pound packages to costumers within a 15 mile radius.

Flytrex's drones, in contrast, are capable of carrying up to 6.6 pounds — six to eight hamburgers, according to the company — for a distance of 3.5 miles there and back. The drones can't fly, though, if there's rain or if wind gusts exceed 18 mph.

Amazon Scout
Amazon is Unleashing Its Own Army of Delivery Robots
1. 23. 19
Read More
Special Delivery
Ford and Walmart Want Self-Driving Cars to Deliver Your Groceries
11. 14. 18
Read More
Amazon Wants to Use Drones to Recharge the Batteries of Electric Vehicles
10. 19. 17
Read More
+Social+Newsletter
TopicsAbout UsContact Us
Copyright ©, Camden Media Inc All Rights Reserved. See our User Agreement, Privacy Policy and Data Use Policy. The material on this site may not be reproduced, distributed, transmitted, cached or otherwise used, except with prior written permission of Futurism. Articles may contain affiliate links which enable us to share in the revenue of any purchases made.
Fonts by Typekit and Monotype.