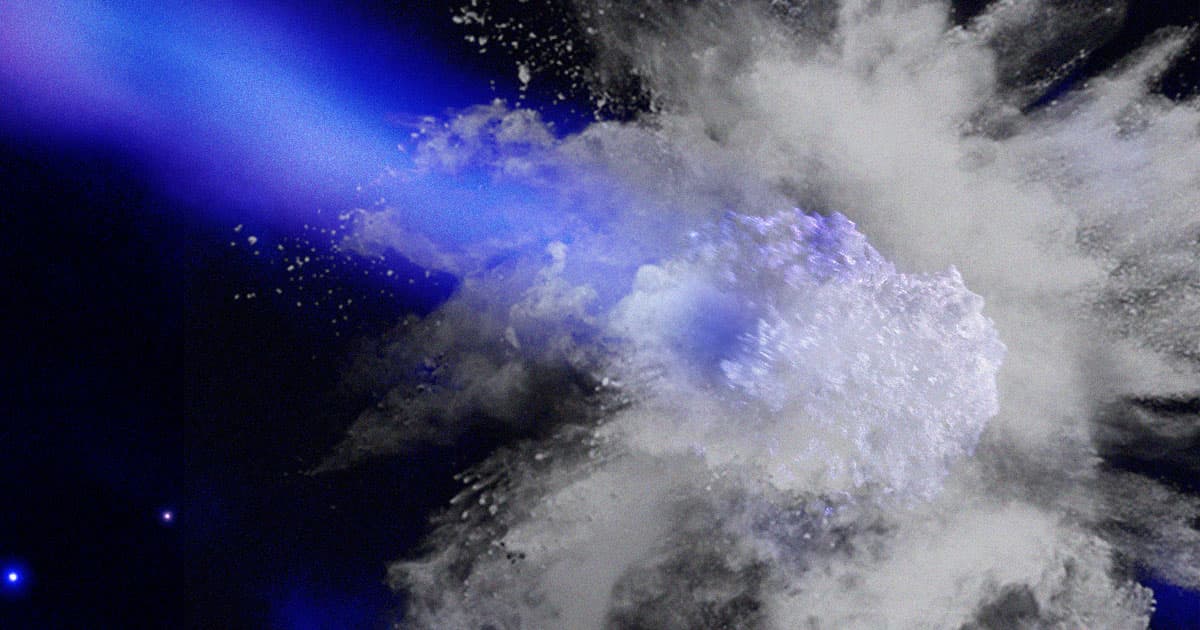 It released "more than one million tons of ejecta."

It released "more than one million tons of ejecta."

An unusual volcanic comet has unexpectedly erupted in a massive cloud of gas and ice, Live Science reports, an offworldly spectacle that stunned astronomers.

Scientists believe the dirty snowball, dubbed 29P/Schwassmann-Wachmann or 29P for short, is the most volcanically active comet in our solar system. It was first discovered in 1927 by German astronomers Arnold Schwassmann and Arno Arthur Wachmann, and orbits the Sun every 15 or so years. 29P is roughly 37 miles across and is thought to have originated from the Kuiper Belt, a massive ring of asteroids orbiting the very far reaches of the solar system.

The event was "pretty rare," Cardiff University doctoral candidate Cai Stoddard-Jones told Live Science [please no commas in situations like this], adding that it was "difficult to say why this one is so big."

Instead of spewing hot magma into the atmosphere like an Earth-based volcano, comets like 29P release a freezing mixture of liquid hydrocarbons into outer space.

Fascinatingly, that material is thought to be made of the same kind of stuff that may have brought life to Earth billions of years ago.

Amateur astronomer Patrick Wiggins noticed the comet erupting in a massive cloud of gas on November 22, which caused an increase in brightness of more than four magnitudes, according to Spaceweather.com.

Follow-up observations by other astronomers confirmed that 29P did indeed erupt violently.

With its crust wrapping a solid icy core, P29 is not unlike the kinds of chilly moons orbiting Saturn, Jupiter or Neptune. Over time, the Sun's radiation causes gases to build up in the core, leading to a buildup of pressure.

Scientists can only hazard a guess as to why it erupted so violently this time. Miles and his colleagues believe that 29P's slowing rotation may have allowed the Sun's radiation to heat up its core unevenly, despite its very wide orbit.

Yet many questions remain almost a century following its discovery. Fortunately, NASA's James Webb Space Telescope is scheduled to have a closer look at 29P early next year, which will hopefully reveal new details about the lonely alien body.

More on comets: This Photo of a Dying Comet Is So Incredible That It's Melting Our Eyeballs

Kuiper Belt Objects
Astronomers Find Rare, Distant Space Object With $3,000 Telescope
1. 29. 19
Read More
Big Bang Time Machine
Here's NASA's Newly-Released Image of Ultima Thule
1. 2. 19
Read More
Ultima Thule
New Horizons Will Fly Past the Most Distant Object We've Ever Visited
12. 22. 18
Read More
+Social+Newsletter
TopicsAbout UsContact Us
Copyright ©, Camden Media Inc All Rights Reserved. See our User Agreement, Privacy Policy and Data Use Policy. The material on this site may not be reproduced, distributed, transmitted, cached or otherwise used, except with prior written permission of Futurism. Articles may contain affiliate links which enable us to share in the revenue of any purchases made.
Fonts by Typekit and Monotype.